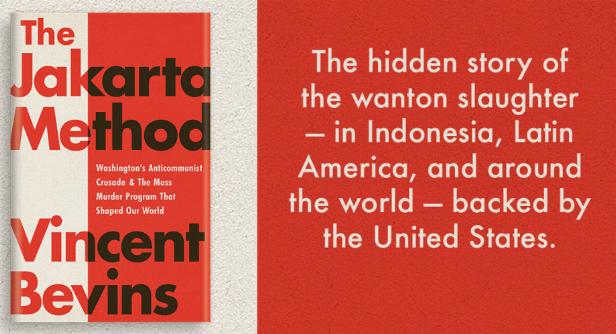 The recently published The Jakarta Method - Washington's Anti-Communist Crusade and the Mass Murder Program which shaped our world, Vincent Bevins (New York, 2020). is a timely reminder of political expedience during the previous Cold War with the defence and security of 'US interests' being the core of foreign policy. Focussed upon the significance of developments in Indonesia during 1965-66 which resulted in an estimated million people losing their lives,

Bevins has accessed numerous declassified documents to establish how the toppling of the popular and left-wing presidential administration of President Sukarno became a global model for similar US counter-intelligence/counter-insurgency operations.

It is not particularly difficult to establish why the US wanted the Sukarno administration removed; the US wanted a reliable ally in Indonesia. The Sukarno administration had provided support for the Indonesian Communist Party (PKI), which was the largest non-governing Communist Party in the world and an  influential political organisation, edging toward levers of power. Sukarno had also hosted the Bandung Conference in 1955 which laid the basis for the later Non-Aligned Movement (NAM). Indonesia, under Sukarno, was highly influential in the NAM which provided a forum for national liberation movements and countries newly decolonised.

These developments were assessed by the Pentagon as running counter to 'US interests'.

US tutelage of the countries in the southern part of the Americas has long been a preoccupation and obsession for presidential administrations in Washington.

The Jakarta Method was subsequently used to serve similar interests in Central and Latin America, including Chile in 1973. Brazil, likewise, was also subject to similar methods to safeguard US control of a strategic ally, as a dominant player in Latin America with the added dimension of being strategically important for the defence and security of the South Atlantic.

Bevins has included reference in the publication to US military assistance programs. They were, in reality, attempts by the US to interfere in countries of strategic interest. A wealth of declassified documents has revealed just how sinister some of the CIA military plans actually were; the Army Regulation 381-20, which formed part of the Army Foreign Intelligence Assistance Program, for example, had on page 1 reference to how counter-intelligence activities were co-ordinated worldwide … against … those who oppose the US Defence Department … during peacetime and all levels of conflict. (1)

Such clarification leaves little to the imagination; with far-reaching implications for political opposition to traditional oligarchies across the southern half of the Americas.

The notorious Project X, a series of military training manuals, likewise, has revealed how the US sought to remove any political opposition to their diplomatic standpoints in numerous countries. (2) They were not renowned for being particularly sophisticated with their elimination techniques as those who have studied Operation Condor are well aware.

Other declassified documents from the period include Counter Insurgency Operations, drafted in 1960, which included reference to US personnel with mobile training teams working in 'coordination with representatives of US Aid Mission, the military police detachment and other appropriate elements of the Special Action Force … for … training of civil police'. (3) A sub-section of the same document, furthermore, stated 'paramilitary personnel should be paid in proportion to the time devoted to the cause'. (4)

Other references, from Australian military manuals during the same period, follow a similar line to the US training provision.

One manual, for example, dealing with military administrations undertaking Civil Affairs duties with US-led operations during the previous Cold War stated the Commanding Officer should ensure 'the most effective use is made of para-military forces', as a means by which formal military personnel were able to distance themselves from more unpalatable behaviour. (5)

It is important to note the plan to out-source terror and repression enabled governments and military commanders to distance themselves from charges of war-crimes.

During the subsequent period of the so-called New World Order, the US did, however, seek to distance itself from their previous political expedience by acknowledging their 'sordid records … and how the CIA seemed to specialise in hiring murderous thugs and military officers', although the declassification of highly incriminating documents was eventually dismissed as 'the bad habits of the Cold War' and quickly glossed over. (6)

With a new Cold War now well under-way there is every reason to believe similar models of counter-intelligence/counter-insurgency are being planned, once again.

The Jakarta Method by Vincent Bevins is, therefore, an important historical study and contribution toward our understanding of the mind-set of those who seek to retain traditional class and state power and hegemonic foreign policy positions to serve 'US interests', at all costs. A moral compass would appear to not exist in their ethical vacuum world: a shadowy, spook-ridden place where faceless government and military officials pursue nefarious agendas.