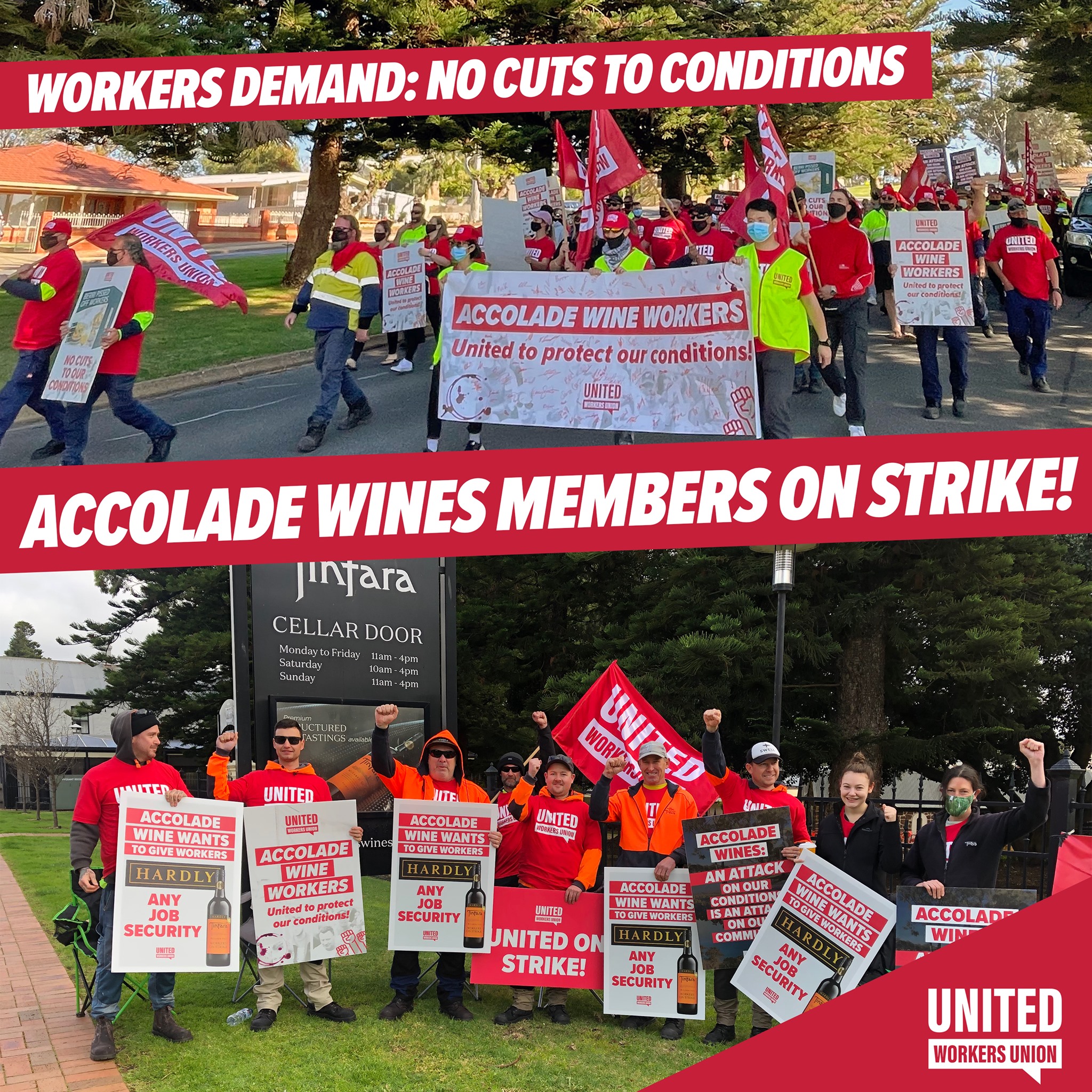 The week leading up to the AFL Grand Final on 25 September saw two contrasting trends in the working class movement in Australia.

One trend, strongly promoted by the imperialist media outlets, was epitomized by the extreme right wing influenced street demonstrations in Melbourne under the Trump like banner of "freedom" of workers to take no responsibility for the impact of actions, such as opposing vaccinations against Covid 19, and opposing restrictions on movement of people to stop the spread of Covid 19. This trend suited the needs of big corporations who oppose any restrictions that retard their production and services for profit maximization.

The other trend, disciplined, united collective action by workers in pursuit of the working people's interests received hardly any publicity in the imperialist media outlets.

In the Riverland and Southern Vales of South Australia on Thursday, winery and vineyard workers employed by US multinational Accolade, the largest winery in the southern hemisphere, took strike action and marched through the streets of Berri.

The workers and their union, United Workers Union, took this collective action to prevent Accolade eroding conditions of employment that would have dire implications for the whole community. Accolade want to reduce workers' retirement income (superannuation) and undermine community standards by accelerating a two-tiered worker system by increasing insecure work at the winery and vineyards. Workers' future action will depend on whether Accolade back off or not.

In the city and regional areas of South Australia, workers employed by SA Water went on strike on Friday and held a rally outside SA Water House in protest at SA Water's intention to change rosters, enforce longer working hours and its consequent negative impact on safe work standards.  These workers look after the quality and supply of water, an essential service to the people of South Australia.

On Thursday, 2,000 Transport Workers Union members employed by Australia Post’s StarTrack parcel delivery service went on a 24-hour strike to oppose provisions in an “offer” made by the employer as part of a new Enterprise Agreement. The corporate bosses have mischievously described their offer as generous, but they have been outsourcing jobs to companies like Amazon’s Flex service which use lower paid sham “sub-contractors” and labour hire employees. Delivery service standards have fallen at the same time as outsourcing has occurred.

The vote strike was carried by a 97% majority vote. Next week 2,500 TWU members at FedEx will also strike.

In the examples described above, workers actions were well organized and in the interests of the people.

During the week, both the Maritime Union of Australia and the Australian Manufacturing Workers Union on behalf of their members made strong public statements opposing the Morrison Government and US imperialism's intention to intensify military tensions with China and threaten the people's security and well-being by building nuclear-powered submarines in Australia. At Friday’s anti-nuclear-powered subs rally in Adelaide, a strong message of support was sent by the SA State Secretary of the Communications, Electrical and Plumbing Union.

This latter trend of organized workers taking collective action to defend and extend living standards and for peace, not war mongering, is the dominant trend and is sure to grow while the former trend promoted by big business does not have the support of the overwhelming majority of working people and is sure to fail.