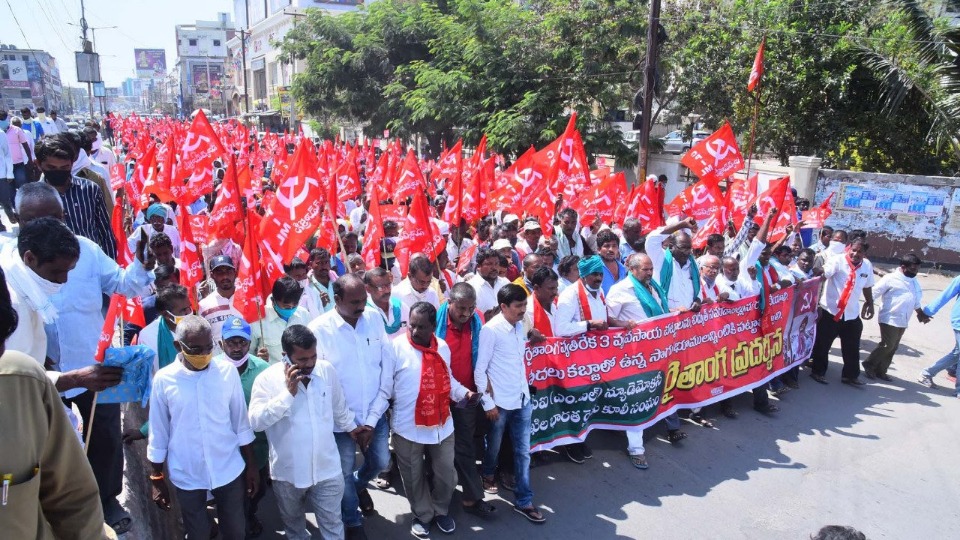 (Introduction: The body to which we are affiliated, ICOR, held its Fourth Word Conference in recent months. Parties and organisations from 23 countries submitted brief reports on the situation in their own country. They came from Africa, Asia. Latin America, Europe and Australia and can be accessed here.  We will publish several of these, beginning with this report from India. It refers to a figure of 95% of the workforce being categorized as informal sector workers, which is one reason why the corporations here see India as a good source of migrant cheap labour. For example, in farm worker, transport courier jobs and service sector jobs, Indian migrant workers tolerate working for lower than award wages here in Australia. Some work for more than $10 less than the Award casual rate because they need work to stay here, and because they want to progress their visa status so they can reach permanent residency status. They know they are being underpaid through, at times, pyramid wage structures where the principle employer (eg a Coles or Woolworths or a big property developer like Lend Lease) is three layers removed from contractors, sub-contractors and the actual person performing the work. The risk they take if they speak up about this super exploitation is that they get deported for breach of some  visa condition and then face a return to the even worse informal sector in India. Since this report was written, news has come through of the victory by farmers against Modi’s Three Basic Laws for the agricultural sector (see victory celebrations photo above). The farmers have lifted their year-long blockade of Delhi, but remain vigilant, as a Facebook comment by the CPI (ML) Red Star shows   – Ned K.)

In our last country report we had pointed out how India, a neo-colonially dependent country, has come under neo-fascism with the ascendance of the RSS-led Modi to power in 2014. Neoliberal-corporatisation pursued since 1990s took a far-right turn.

The 65-year old Planning Commission was demolished. To whiten huge black money holdings of corrupt corporate billionaires, demonetisation was imposed. It sucked out whatever was left in the arteries of the common people. Then GST deprived the States (Provinces) of their Federal right of resource mobilization. All tax burden was shifted to the common people. Corporate tax rates were brought down. It carried out one of the biggest disinvestment programs, selling-out of the whole public sector to foreign and Indian corporates at throw-away prices. And corruption, permeated all layers of ruling system.

To allow unfettered “hire and fire” by corporate capital, the Modi regime replaced 44 labour laws with four Labour Codes. Unorganised/informal sector workers now constitute around 95 percent of the Indian working class. All environmental regulations that restricted corporate plunder of nature were taken away. New Education Policy-2020 facilitates corporatisation and saffronisation of education. Through three Black Laws agriculture is corporatized. This led to the historic and world’s most prolonged Farmers’ Struggle.

The advent of COVID-19 and the most stringent and coercive lockdown to facilitate corporatisation had led India to horrific de-industrialisation and economic contraction, with speculative spheres ballooning.

Meanwhile internationalisation of production and global integration of finance capital have enabled many emerging Indian corporate billionaires to become junior partners of MNCs while depending on imperialism for technology and market. The State’s policy decisions, both domestic and foreign, are still subject to the diktats of neo-colonial neoliberal institutions. While continuing as junior partner of US imperialism and its strategic ally, the Indian state resorts to expansionist designs in South Asia. QUAD and its encroachments in Nepal and other neighbours shows this.

All-round corporatisation and superimposed capitalist relations, did not eliminate feudal relations, its remnants and values, which, merged together have taken barbaric forms. The RSS led corporate-neo-fascist regime has propped up all obscurantist, feudal, casteist and patriarchal forces. So, Dalits, adivasis, women and minorities become still more oppressed. Integrated with corporatisation, casteism and untouchability reinforced by Brahminical ideology and culture have become omnipresent, even in institutions of higher education and scientific research.

The advent of neo-fascism in India led by RSS, the longest running and biggest fascist organisation in the world, is also coterminus with the emergence of neoliberalism. Taking advantage of the political-economic instability and aggravation of contradictions in the country, RSS came to the limelight and its political front, BJP became India’s biggest political party within a short span of time with the support of corporate forces and media. Following its re-election to parliament with a greater majority in 2019, Modi rule has forcibly integrated Kashmir into Indian Union and the 20 million Muslims are targeted, spreading Islamophobia. Thousands were publicly lynched. Now, many thousands of families are thrown in to dreaded Detention Centers in Assam.

Superimposing pan-Indian homogenizing drive over multinational, multilingual, multicultural, multi-ethnic and multi-religious essence of India and all values of modernity including rational-scientific thinking, are rejected, fostering the cult of tradition and obscurantism, treating dissent and disagreement as treason, targeting Muslims, communists and progressive-democratic forces.

Uncompromisingly integrating itself with corporate finance capital, RSS-led BJP regime has become typically neo-fascist. In conformity with the conspicuous international trend towards intensified plunder of nature by corporate-speculative capital under neoliberalism, India also is witnessing unprecedented ecological devastation. In this neo-fascist context, CPI(ML) Red Star has called for the broadest possible anti-fascist people’s front for throwing out the RSS led BJP rule from power, using all forms of struggle. At the same time, the Party is building a core of revolutionary left and struggling forces with revolutionary program.

Recognizing that both these tasks can be carried forward in a vast country like India, only by a powerful party organization with countrywide influence, surrounded by class/mass organizations and people’s movements, to mobilize the masses for a countrywide insurrection for seizure of political power led by the working class, peasantry, and all exploited and oppressed, it is given the top priority today.