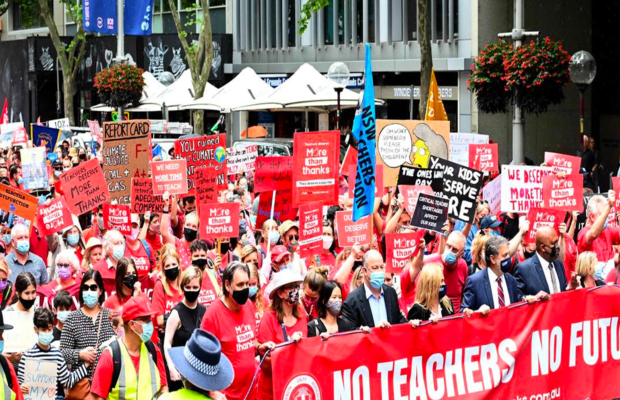 Lots of NSW workers have been up in arms about their wages, about short staffing They have realised just how important they are to keeping the community going and keeping people safe.

They have good reason to be mad as hell and they’re backing themselves, taking action in campaigns to get real wage rises, demanding more staff, and better community services.

Against government resistance they are standing up for themselves as human beings, clear how their lives and work have value. They’re essential workers. They can’t be fobbed off with being thanked for their service, a common thread that has lots of traction.

‘More than Thanks’ is the catch cry of a campaign the NSW Teachers Federation has been running. It’s fired-up teachers at public schools across the state. Nurses have their own slogan “Thanks is not enough”. Health Services Union hospital workers and paramedics went on strike on April 7 behind the banner ‘Stand Up, Fight Back, 2.5% doesn’t cut it.’

Bus drivers in government-funded services across western Sydney, including the Blue Mountains, struck a week ago for pay increases and safety. They followed hot on the heels of hospital workers, the bulk of the hospital workers who aren’t nurses or doctors. Those workers along with ambulance paramedics meetings state-wide was the first time they’ve been out in years. 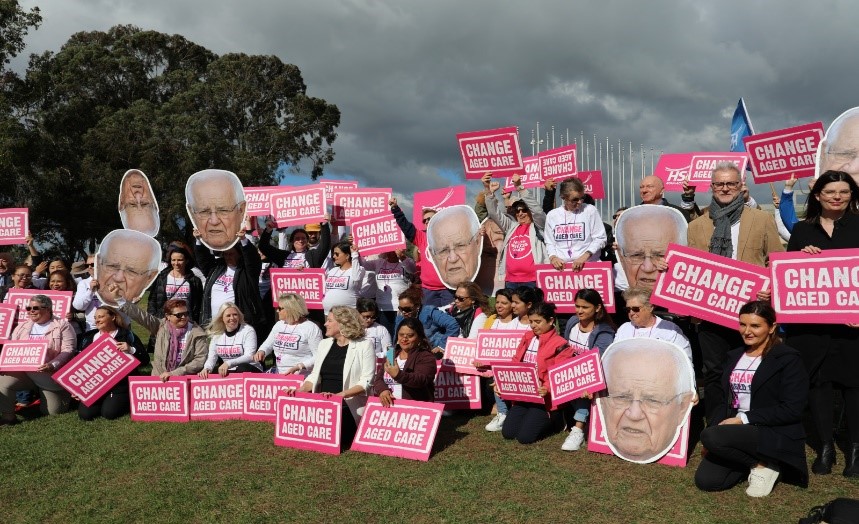 Nurses had a second state-wide strike on 31 March over the hospital staffing crisis when 5,000 rallied outside parliament house. Aged care nurses (left) had their go. Public-school teachers went on strike in defiance of an Industrial Commission order on 7 December last for the first time in years over pay and staffing. Ongoing meetings and local protests have seen the campaign persist with more action likely in the near future.

The Public Service Association held meetings across the state on April 12 to get behind their campaign cry ‘The Public Sector needs a pay rise’.

The government has officially frozen pay increases for the last decade at 2.5% max, really often well below that. With official (understated) inflation running away at 3.5% plus, our cost of living increases are way above that limit. No increases can respond to the changes to work practices and productivity. There is the growing issue of security of employment with casualisation. Increased workloads and staffing shortages are common across the board. Covid has increased the dangers and the workload and staffing issues.

Truckies have been on strike over pay, security of employment and workloads too. Rail workers pursuing a new Enterprise Bargaining Agreement have found a lot of friends, allies, comrades in the battle, a whole lot of new strength together. 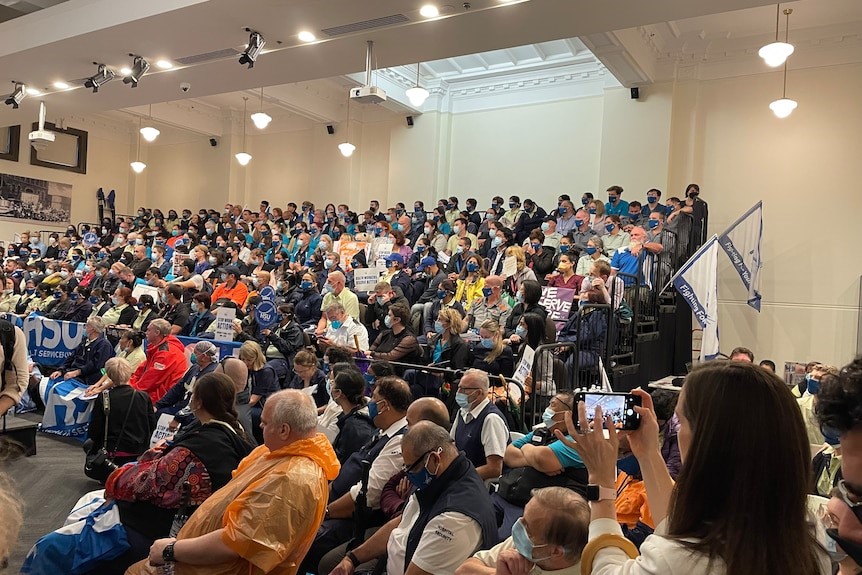 Inflation is making paying for our necessities so much harder after years of pay limits. My favoured litre of yoghurt for breakfast went up from $5 a litre last year to $6 a litre now. The fancy sourdough bread I like with eggs and tomatoes has gone from $5 a loaf to $6 now. Unleaded petrol went from $1.80 towards $2.20 a litre then settled back to around $2.05 last month, before the government felt an election coming on and took half the excise off it. But they were cynical enough to cut it only until the election is over.

House prices and rents have been going through the roof. If you have bought a house, the Reserve Bank has flagged, they are going to lift interest rates soon. Mortgage repayments will be going up.

Inflation is up, wages are locked down by the state government to less than inflation. Talk about lockdowns, the government pay lockdown was locked tight for years before the pandemic.

Food, fuel and housing prices up. Wages locked down and losing value as prices go up. The credit squeeze is being lumped onto us as far as governments and big corporates are concerned.

Wages, the price you sell your working time for, needs to be able to buy your necessities of life, and a bit of extra would be nice. You need it, and the boss really needs it, to be what you need to live and front up to work next week, on and on. Among wage slaves, some live a bit better, some live a bit worse. None of us get the real cream.

(Above: NSW rail workers backing industrial action over their EBA)

Clive Palmer, the slug running for parliament and advertising endlessly in scabby yellow, told the National Press Club last week his income last year was $650 million or so. We don’t get that.

The average salary and wage of employees in Australia in 2022 according to Jobst is $67,860 a year. Palmer’s income as one of the smaller corporate types, was equal to more than 9,500 average wage and salary earners in total. It was the same as 12,500 hospital cleaners on standard hours were paid before tax.
Even at his size, he can’t be eating that much. And Clive’s just a sardine among the sharks of multinational corporate business.

Jeff Bazos, owner of Amazon, says he is paid US$81,840 per annum but Forbes Magazine had his worth increasing by $24 billion in 2020. Every 5 minutes of 2020, Jeff Bazos’s wealth increased by more than 4 Hospital cleaners were paid for the whole year.

Despite being small fry in that pond, Clive Palmer is still a capitalist on a bit of the cream, while the bulk of us are locked into the wages system on a relative pittance. Inequality between capital and labour has been soaring as house prices rise, corporate profits soar and wages are locked down by government directives.

Whatever governments, or new governments, do the reality of inflation has been, and is going to be, belting people’s standard of living while their wages stagnate, which in real terms means they are going down. Whatever happens in elections, nothing much different seems to happen for us. Its only action that starts things moving.

The world economy and the Australian corner of it have government and business debt-to-GDP ratios at levels greater than World War 2. There are enormous accumulations of money-capital and credit sloshing around capitalist economies hunting for somewhere to get an average profit. Governments are a bit stymied in going much further to provide boltholes for the capital sloshing around. It all adds up to trouble more than brewing. All this was in place prior to the Covid and Ukraine crises. The crises have intensified the problems.

Initial surges of revolt have been breaking out – in Sri Lanka, in Peru, in Sudan for starters. Withdrawal of government subsidies on grains, fuels, cooking oils and the like have fomented anti-government revolts.

The US and other major powers are trying to take advantage of the difficulties of governments who have been flirting with US rivals, China and Russia, to create trouble, as can be seen in Pakistan.

We saw an example of it nearer home last year when the US Ambassador to the Solomons Islands gave a regional leader the green light to foment racist anti-Chinese riots using racism, Christian fundamentalism and local tensions over exploitative rents by the capital’s traditional owners on other islanders working in the capital. It was aimed at Solomon Islander leaders’ association with Chinese business and government. A kerfuffle over closer security ties with China continues to percolate away amidst both powers meddling, the US through its Australian minions.

The war in Ukraine is totally enmeshed in the US-Russia rivalry over eastern Europe, and the struggle to find new territories for investment, new masses of workers to exploit and to make profits from their labours, new markets to flog goods and invest capital which all the powers have in overabundance.

Inflation and debt, government and business debt as well as household debts, housing costs running away from people. They were the recipe for the Arab Spring and the Occupy movements in Europe and North America in the Global Crisis of 2008-2011. Much more can be said about that.

We have elements of resistance breaking out here. For the last couple of years health, hospital, education, transport and aged care workers have been told they are essential. They have realised just how important they are, how valuable they are and how powerful they can be. They want a whole lot more than thanks.

It’s great working people are mad as hell across a wide swathe of NSW workplaces. Their colleagues in other states are in action too at levels not seen for a long time. The contradictions between workers and capital are rising as the conflicts between the great powers flare.

Workers demand people before profits. They’re in action to make the rich pay.

They’re not taking it lying down anymore.