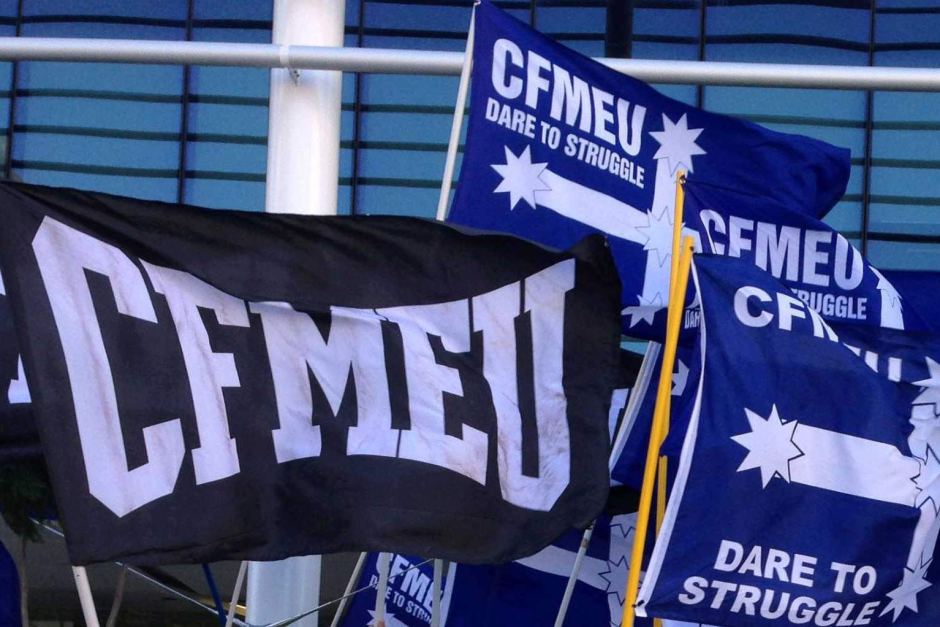 The Morrison Government’s Industrial Relations Minister Michaelia Cash today stated that if the Morrison Coalition Government is returned at the May 21 election, it will double the maximum penalties for serious, deliberate and repeated breaches of the law covering workplace behaviour in the construction industry.

Before you start applauding, she was talking about the behaviour of construction unions, and the CFMEU in particular, and not the major construction monopolies whose behaviour is corrupt and criminal.

Builders have been murdering construction workers for years.  That is the only interpretation that can be placed on their deliberate evasion of safety requirements upheld by unions, that lead to deaths and maimings each year on building sites.

It has taken many decades of struggle by construction unions to have the principle of employer responsibility for the manslaughter of workers accepted, and even now, it is only done at the state and territory level, and is incomplete across those jurisdictions.

Labor and Liberal federal governments have never established a “tough cop on the beat” to hold employers responsible for deaths in the industry. Both have supported the anti-worker Australian Building and Construction Commission (ABCC) in its war on building unions.

The state and its various institutions are hard-wired to carry out the behests of the ruling class -  and in this historical moment, that class is not the working class.

And now we have Michaelia Cash promising to hit the working people in the construction industry twice as hard as before, and the record to date is one of millions and millions of dollars in fines on their unions, and harassment and persecution of their leaders.

Meanwhile other corrupt and criminal activity by building bosses goes unpunished by Cash and Co.

For decades, building bosses have overseen the spread of the cancer of sham sub-contracting throughout the industry where workers have not been employed as workers with entitlements to Award provisions such as long service leave, sick pay and holiday pay.  Instead, they have been required to obtain an Australian Business Number (ABN) identifying themselves as independent sub-contractors and employed as casual workers through labour hire companies.

Cash has done nothing to stop this insidious malpractice. Instead, it has been left to the CFMEU to pursue the matter through the courts, themselves a part of the capitalist state machine. Two Federal Court decisions went against the union, the court in effect determining that bosses who try to rip their employees off by mislabelling them as independent contractors were not engaged in deliberate underpayment.

Success finally came last February when the High Court found that a construction worker who was engaged through a labour hire company but required to work under an ABN for 25% less pay was, in reality, an employee of the labour hire company and not an independent contractor.

The "tough cop on the beat” was conspicuously absent from the proceedings.

Nor will the decision prevent the other criminally corrupt practice of building bosses who tender for work on major construction projects at 10 per cent or so below their expected real cost, and then screw their sub-contractors in various ways to not only make up the short fall, but come out of it with a healthy profit.

This practice was the subject of a review commissioned by the Turnbull government in December 2016 and ironically announced by Michaelia Cash who was, at the time, Employment Minister.

The review was headed by John Murray AM, a specialist in building-contract disputations and security of payments legislation. The Murray Review was handed down in May 2018 with 86 recommendations, including cascading statutory trusts, which ensure money payable to sub-contractors is reserved rather than distributed to other secured creditors in the event of an insolvency.

Murray also called for national harmonisation of legislation which, like the industrial manslaughter laws, is inconsistent across the jurisdictions.

Four years down the track, the Morrison government has done nothing to implement Murray’s recommendations, effectively guaranteeing building bosses their right to impoverish and exploit subcontractors, who commonly do up to 85 per cent of the work on a construction project, but whose payment is funnelled through the builders who employ them, and who then decide when and with what contract “variations” the payments are passed on.

It is corruption and criminality, pure and simple, yet Cash and Co turn a convenient blind eye and fill the media with absurd claims of union “lawlessness”.
In a class society, the question of law cannot be abstracted from its social context and remains a class question.

We are all for unions challenging the rule of capitalist class rule, and agree that bad laws must be broken.

We are all for building bosses being restrained by strong union and worker militancy and their protection by bad laws being stopped.

Our day will come, when workers rule society and develop a legal framework for the building of an independent and socialist Australia.

Out with the Coalition, and have no illusions about Labor!