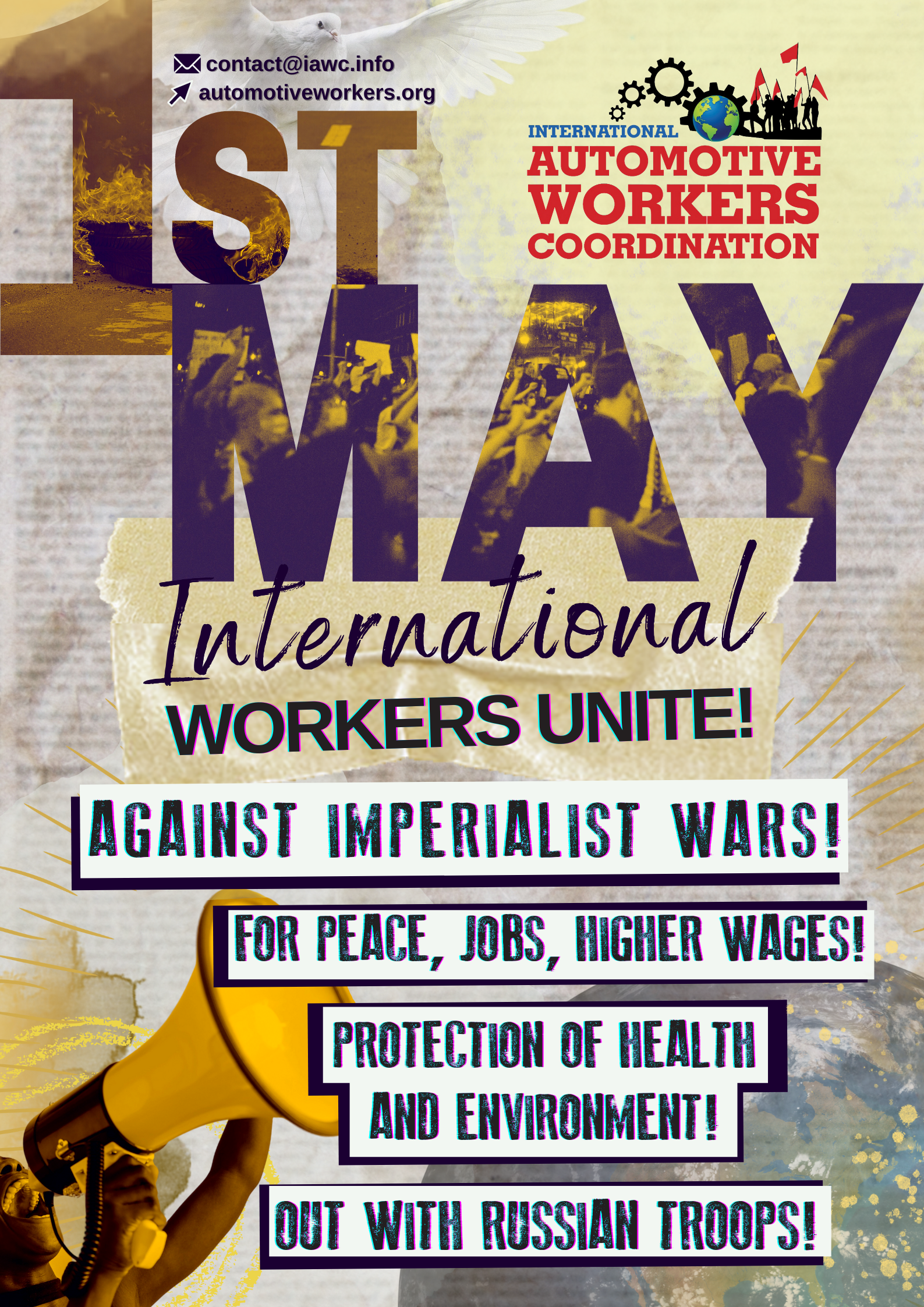 From time to time, we have posted messages of support and appeals for support from the International Auto Workers Coordination.  The destruction of car manufacturing industry in Australia and elsewhere has brough home to workers who remain in that industry a heightened political understanding and awareness.

For example, following the Russian invasion of Ukraine, representatives of Ford workers in Spain, Venezuela, France and Germany issued a joint statement condemning “the imperialist attack of Russia on Ukraine. Stop the bombing immediately! Russian troops out of Ukraine! The NATO military alliance under the leadership of the USA with its gradual eastward enlargement has provoked this situation.”

The statement rejected “all rearmament programmes of our governments. This does not serve peace, on the contrary. They do not get our support for their war policy.”

It called on Russia and the US/EU/NATO to keep their hands off Ukraine.

A call on auto workers, their families and fellow workers to come out on May Day ended with the slogans:

Workers of the world, unite!
Against the destruction of jobs and for the 30 hour week or 6-hour day with full wage compensation - worldwide!
For a full legal right to strike in all matters!
Against the rightward development and fascization of governments!
We fight for a world free of imperialist wars, hunger, poverty and environmental catastrophes!
Our vision is a world without exploitation and oppression, where people can live in peace!
Long live International Solidarity!

Several days ago, a call was issued for solidarity with workers at a General Motors plant in Mexico.  We are sure that former workers of the closed car plants in Australia, and workers in other industries in this country, will feel the solidarity called for in these statements.

Solidarity with the National Independent Union for Workers in the Automotive Industry (SINTTIA)!

We, automotive workers from around the world, express our solidarity with the valiant GM workers at Silao, Mexico who recently organized and fought to form the independent union, SINTTIA, and who are now negotiating their first collective bargaining agreement (CBA) on behalf of 6,000+ truck builders.

We stand with SINTTIA under the leadership of General Secretary Alejandra Morales in its quest for a CBA which provides family-supporting wages and benefits, humane work hours, and good health and safe working conditions.

General Motors will attempt to force SINTTIA negotiators to accept an inferior agreement, or refuse to negotiate a contract at all, to make an example of the first breakthrough grassroots union formed by GM workers in Mexico. GM will rely on the former corrupt CTM officials and their allies who were voted out by the workers, to undermine their determination to win a just and equitable first contract.

We therefore urge autoworkers throughout the world to militantly and resolutely support SINTTIA in its quest for victory, which will lift the living and working standards for the GM Silao workers and all workers, especially in the former colonized countries.