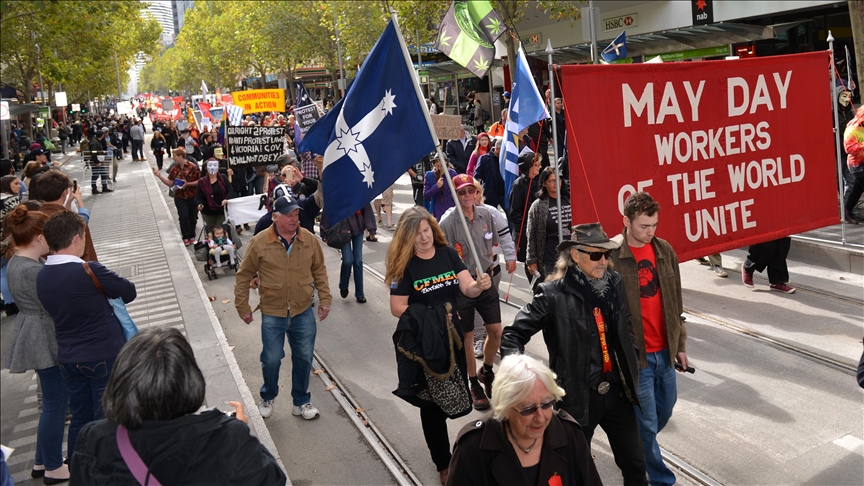 May Day rallies were held across Australia celebrating the solidarity of the working class and the international struggle for a better world. Demands were raised for higher wages, the right to strike, abolish anti-worker laws and the ABCC, self-determination for the First People, the right to affordable housing and childcare, secure jobs and dealing with the climate crisis, for peace and socialism.

We reproduce a talk at the Melbourne rally by anti-war activist Shirley Winton who spoke against the ruling class push for war, and the imperialist AUKUS military pact.

"Thank you, comrades.  Militant solidarity greetings on this day of working class struggles and international solidarity.

I acknowledge that I’m standing on the stolen lands of the Wurundjeri people of the Kulan Nation, never ceded.  I pay my respects to their elders, past, present and emerging and affirm my solidarity with their long struggle against the colonial invasion and dispossession, and for land rights and just treaties.

As we stand here today on 1st May and pledge our commitment to working class struggles for a better world, clouds of war are gathering in our region.

It will be a war between major imperialist powers competing for control of resources, markets, the exploitation of people, natural environment and for spheres of influence.  A war that is being instigated and led by the US, with its puppet Australian government obediently tagging along.  And, like all the imperialist wars, the working people and the environment are the casualties, the disposable pawns in the super power competition and the profiteering military industrial complex. It is a war of aggression forced on the people of this region. It is the working class who will be paying with our lives, our health, our livelihoods and carry the main economic and social burden of imperialist wars.

AUKUS is an aggressive, US led military pact between US, UK and Australia, put together by the US to ramp up war with its growing economic rival China.

AUKUS and its nuclear submarines are not for the defence of Australia and peace in the region.  It is only to boost the US war plans against China tens of thousands of kilometres away from our shores, and pour more profits into the coffers of its military-industrial complex.   AUKUS is the NATO of Asia-Pacific.