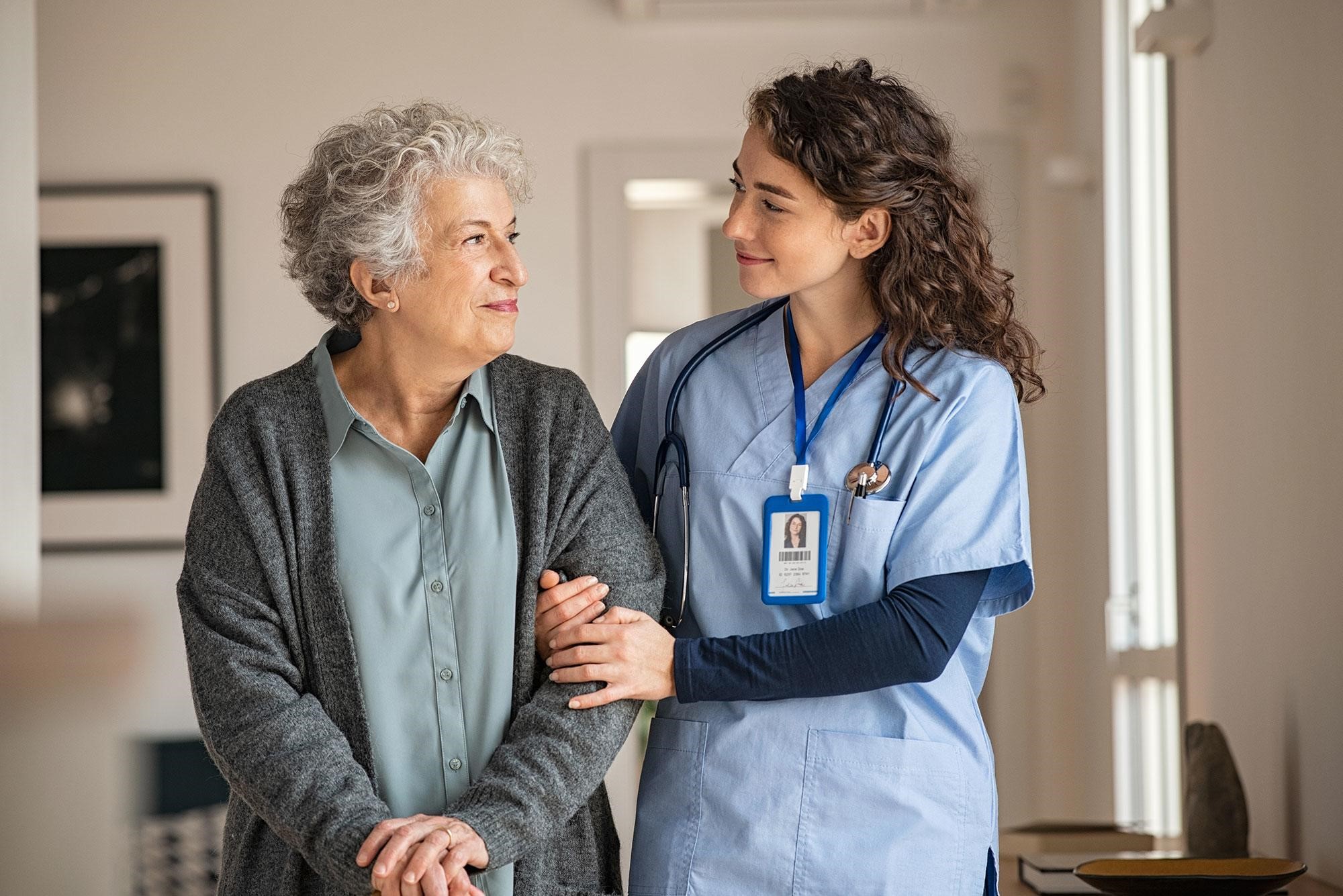 (Above: It's common for workers to have close relations with people in Aged Care)

A friend has been an aged care worker for a bit more than a year. She’s been providing services to support aged and disabled people to stay in their homes.

She has just given her notice, leaving her permanent part-time position early in May.

Her story is a trajectory experienced by many in the industry, heralding even greater staffing crises in aged care and disabled services ahead.

The Royal Commission into Aged Care Service Quality and Safety recommended 25% wage rises and $10 billion extra each year from government to fund a swag of improvements over what it titled ‘Neglect’. Unions are chasing wage rises at the mercy of various commissions and tribunals operating within government guidelines at the beck and call of the big monopolies.

In her small, dispersed, non-profit operation, where workers gather in one place about three times a year, they don’t know each other. Work is allocated and communication with supervisors is through email and messaging on company phones. There is no union and the conditions work against workers organising to stand up for better wages and conditions together.

She can’t continue on her present wage. She wrote to her boss asking for a wage rise a few weeks ago and heard nothing.

She has a substantial mortgage, a bit less than half a million, about 10 years along the repayments.  She has two young kids in school, one at primary school. Her husband works long hours as a mechanic. They are Australian citizens of Indian ethnic/cultural background who’ve been here for more than 15 years.

They are currently paying off her car.

Their money is not going far enough. They suffer grievously from inflation while their wages stagnate. They are selling her 3-year-old car and downgrading to an older smaller car, a move her husband’s work and skills facilitate, and have confidence they won’t get a bomb. It’ll ease the pressure with a $10,000 or so improvement in their situation, clearing the debt on the car with a bit left over.

She went into the work for all the right reasons. She and the family need the money to live, and if it was better, to thrive. She also oozes empathy. She loves the people she supports, plies them with sweets and some with of her cooking. Most make the job a delight, a part of her social life.

She does cleaning, shopping, laundering clothes and having a chat to ‘her’ friends and clients. She has to fill in reports about her observations of the people whose homes she goes to, whether they ae better, stable or declining, their mental state, etc. She has trained to work with people with dementia and Alzheimer’s, aggressive people and people with other mental problems as well as the frail aged and disabled of various types. The reports have her somewhat responsible for their health, skills and responsibilities.

She separates ‘her’ people into the ‘friends’ and clients categories. Some are lonely, living away from family and having lost much of any social circle they had as they move through their 80s. They and a number of others are happy to welcome and embrace her as a support, as an equal with her own life and value, etc. Others are a bit aloof, welcoming the support but approaching her a bit like a servant. She’s always clear the latter ones are just a couple of the two dozen she supports each fortnight.

My friend’s been quite torn about putting in her resignation. She would miss her ‘friends’ and clients. It is a bitter decision, forced on her by pressures weighing her family’s efforts to meet their needs against her desire to sustain her connections with the friends she has made, and the satisfaction she gets through her work supporting them.

Lack of connection between workers leaves her few options

The way the workforce is organised leads to their isolation from each other.

The boss and supervisors communicate distribution of the work and other information to helpers or carers by email and phone messaging.

Workers, who are universally female with the bulk of migrant background, hardly know their supervisors. They meet supervisors at inductions and uniform distribution, the rare occasions where they get supplementary supplies of PPE etc, and through messaging and emails. They sometimes talk on the phone. Supervisors follow workers daily activity through a geolocation app on their work phone.

Workers only meet each other at training sessions early in their employment, and then periodic staff meetings, allied to PPE distribution and refresher courses, which come up about 3 times a year. Workers hardly know each other.  How do they get together to pursue improved wages and conditions? My friend is acutely conscious of her isolation from her work colleagues.

Throughout the pandemic, the workers have met a few times, reinforcing each other’s dedication to looking after the vulnerable people whose homes they cleaned and who they worked to help. But the staff meetings were very few. There is no union and no real prospect of one arising within that small non-profit organisation. It would have to come from stronger organisation in the larger workplaces leading dispersed workers into organisation and activity.

Exercising what power she has, withdrawing her labour

She is not powerless. She has decided to exercise the only power she currently has. She has moved to withdraw her labour, not temporarily, but permanently.  Given that home care workers are in such short supply and she has offers of additional work from her second job, her position has its strengths.

Given the parlous state of the economy, of leaving the security of permanent, government-funded work in an industry with severe staff shortages, and going to casual insecure work as an ABN worker albeit at a much higher rate, has its weaknesses.

The lack of collective organisation limits her options and weakens her position. She judges she is in no position to change that. The low rates and poor conditions of employment reflect the weaknesses of the workers’ organisation, confronting their employer one out.

She is employed by a non-profit, religiously-based enterprise engaged in government-funded/subsidised schemes. Some clients are charged co-payments on subsidised services.

She gets about $1,200 for doing around 40 hours a fortnight plus travel using her own car between the homes of a couple of dozen people. With unpaid travel time between clients and allowing for extra petrol costs, her hourly rate actually works out at $19.50 or so an hour, even without the travel time to and from her home.

She has to pay for petrol from home to clients and back home. She gets just 75c for travel between clients. She gets nothing for her travel from home to her first client and back home. On some days she is sent 50 kms to her first work. She spends about 8 to 10 hours a fortnight, equal to about 20%  to 25% of her work time, travelling unpaid to and from her work and getting just $150 for her travel between houses she works in, while she’s now spending about $250 or more a fortnight on petrol.

She feels the sting of the injustice of that alone, as well as her unmoving wage rate. She is vocal about the need to be paid much more for travel, enough to cover petrol and something to cover wear and tear on her car and pay her wage for travel between clients, maybe 15 hours travel time at $1.75 or $2 a km or $350-$400 a fortnight plus wages for 8 – 10 hours.

The support workers also suffered shortages of PPE and delays in safety training for the pandemic at times last year.

The recent Royal Commission into Aged Care Quality and Safety recommended a 25% wage rise for aged care workers. That would push her wages up to just on $30 an hour. A bit more than that, and a hefty adjustment to her travel payments, would have her stay in the job and battle on, still not in clover but able to get through and ease the financial squeeze on her family for now.

My friend has a second cleaning job which pays just under $40 an hour as an ABN worker, no paid super or sick leave, and all the other insecurities and shortcomings. She expects she would clear about $32 an hour with those shortcomings allowed for. She has been offered much more time with that contractor, and she knows they have shortages of staff and plenty of work. Its an attractive, if a bit insecure, option while nothing else is offered to her in her home support job.

Her boss has asked for a paid meeting before she goes. She is geared up to more than air her case. But she is clear, and completely frustrated, that it’s in their hands. She really has no power other than by walking away. She will walk away or, , if an offer is made, possibly take what they offer.

My friend’s situation hasn’t left her with the opportunity to get together with her co-workers. She doesn’t have a route to take the fight up to government and the monopoly and foreign imperialist corporates who have government in their pocket. She feels impotent, unable contribute to improving aged care and disability services, unable to build organisation of people’s power against the corporates’ power.

But she’s not happy about it. She won’t forget the choices she’s been forced to confront and make.

She’s filthy about her choices, ready to listen to and act on leadership standing up for people against the cashed-up monopoly and foreign imperialist corporates and their government.

The task of building opportunities to fight on a wider front is a task the working class and other forces for the people face. A lot of workers are in action taking that up.

With greater hardships coming down the economic pipeline, more struggle lies ahead.