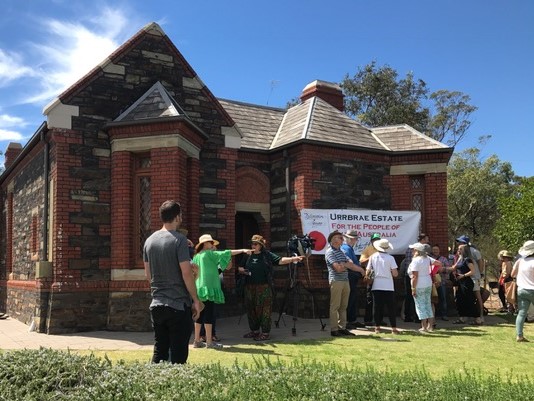 On Sunday 31 January 2021 about 1,000 people rallied at the Waite Institute gardens in suburban Adelaide against the SA Liberal Government decision to demolish a listed state heritage gatehouse and several hundred-year old trees in the gardens around the gatehouse.

The demolished gatehouse and surrounding land is to be replaced by a widening of a left turn lane from busy Cross Road to Fullarton Road in Adelaide's south eastern suburbs. It is part of a longer term plan by the SA Liberal Government to destroy much more urban landscape in an effort to literally bulldoze through a roadway to connect the South Eastern Freeway which heads out of Adelaide for Melbourne and the North-South city freeway being built from Gawler to the north of Adelaide to the wine industry of McLaren Vale to the south.
Those who will benefit most by this grand plan are the oil companies, road transport barons like TNT and Linfox and the big corporations who control construction.
The Government is trying to sell the first Waite Institute stage of this project as just an improvement for the general public motorists by shortening the waiting time to turn left from Cross Road to Fullarton Road by 8 to 10 seconds!
So far the Government, despite a brave face, is feeling the pressure from people's actions, both online and in real time such as this rally on 31 January.
The gatehouse itself  was constructed by stonemasons and builders labourers over one hundred years ago. As far as buildings go, this one is a fine example of the workers' high level of skill and artistry.
The Waite Institute was owned by a local pastoralist with links with British colonialism. What South Australians identify as "old money" or "North Terrace farmers". Some of the old money were ruthless oppressors of First Nations Peoples, and no friends of the rural or urban working class either.
Occasionally some of the old money had some level of consciousness about the importance of building some level of independent development in the small state of South Australia to offset the louder voice of the eastern states in the new federation of Australia in the early 1900s.
This is the context in which in 1913, pastoralist Peter Waite decided to bequeath his Urrbrae Estate to the University of Adelaide. The purpose of this bequest was twofold:
• To create an agricultural and teaching facility
• To preserve part of the estate as a park and garden to the people of South Australia. 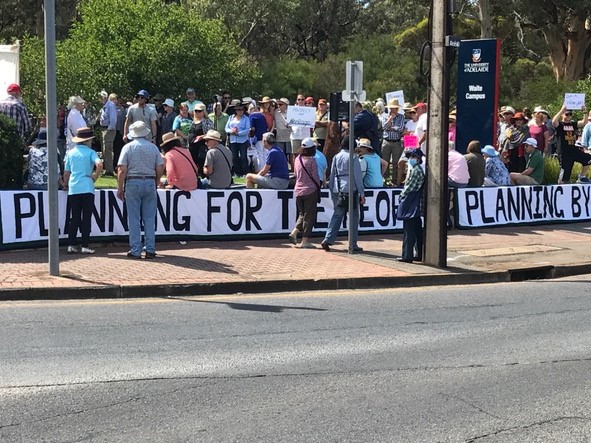 The garden and park became known as the Waite Arboretum and is visited by thousands of local, interstate and overseas people each year. It is an escape (15 minutes from the city's centre) from the urban landscape of tar and cement, a place where people can still see and hear a wide variety of native birds and find a cool spot from the searing heat of a hot Adelaide summer.
When the Government made its announcement about acquiring the land on which the gatehouse was built and its surrounds in 2020, a people's movement steadily developed to oppose it. People from the surrounding suburbs in a blue ribbon Liberal Seat of Waite have been joined by people from all walks of life from suburbs all over Adelaide and beyond in opposition to the Government's decision.
Premier Marshall is caught between serving his big business masters in the road construction and road transport industries and facing the strong likelihood of an electoral backlash in the eastern suburbs (usually Liberal voting) electorates. Self interest in not wanting to risk losing the coming state election in March 2022 may mean that Premier backs off and drops the proposed demolition of the gatehouse and acquisition of what the people see as part of the "commons" even though legally the Waite Institute land facing acquisition is owned by the University of Adelaide.
It was revealed at the rally on Sunday 31 January that the University of Adelaide is opposing both the acquisition of the Waite Institute land and the proposed demolition or relocation of the Gatehouse.
A long drawn-out legal battle is about to begin running parallel to the people's action on the ground.
The construction division of the CFMMEU is no doubt keeping an eye on this battle. The fact that demolition of the Gatehouse would not involve a large number of jobs may work in favour of the campaign in winning support from the Union to preserve it if the Government tries to force the issue and bulldoze the Gatehouse.
The $61 million cost of widening the road and demolishing the Gatehouse and old trees could be much better spent on schools or public health projects which would employ more construction workers than the few needed to demolish