Capitalist greed and the destruction of sanctuary mangroves 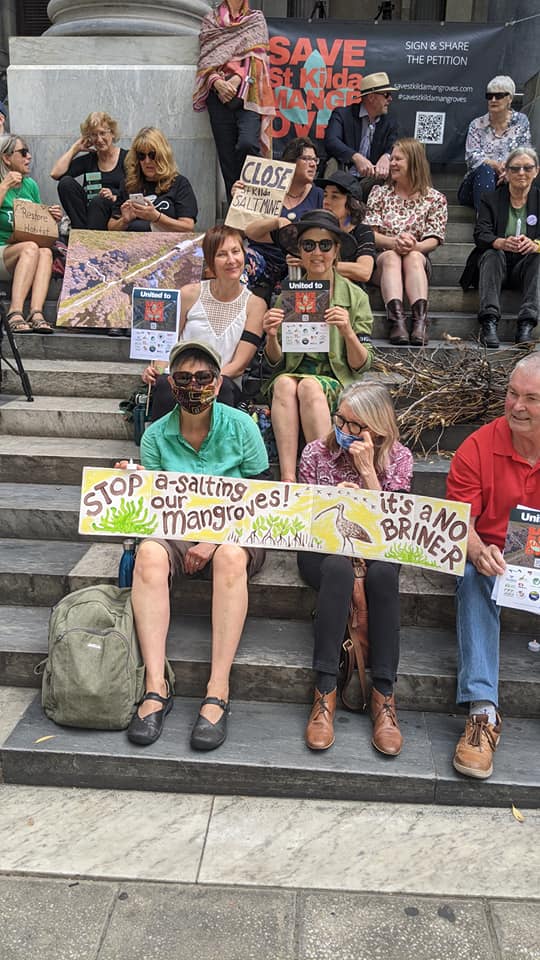 150 defenders of the St Kilda (South Australia) mangroves held a rally yesterday on the steps of Parliament House to coincide with World Wetlands Day. World Wetlands Day marks the date of the signing of the Convention on Wetlands of International Importance (the Ramsar Convention) on 2 February 1971 in Ramsar, Iran. Australia is a signatory.

Adelaide’s St Kilda mangroves are part of the 60 km long Adelaide International Bird Sanctuary National Park - Winaityinaityi Pangkara. Winaityinaityi Pangkara means ‘a country for all birds and the country that surrounds these birds’ in the language of the Kaurna people. The sanctuary stretches north of St Kilda along the coastline hugging mangrove swamps and samphire flats.

Adjacent to the mangroves and samphire flats are artificially created salt fields. They are pumped full of sea water and left to evaporate into highly saline ponds from which salt was harvested.

The salt fields were purchased in 2014 by an Adelaide capitalist, Peter Jurkovic, after the previous owner ended salt harvesting. He purchased about 30 km of the coastal belt.

Jurkovic is the sole shareholder and director of Royal Park Salvage and Adelaide Resource Recovery, quite prominent companies involved in demolition, waste management and recycling. Buckland Dry Creek is part of the Jurkovic Group. Signs saying “Jurkovic Group” are on the fence lines surrounding the salt fields.

He is also the owner of the Epic Building Group and was confronted by strong community opposition in 2018 when he proposed demolishing the 17-room historic Escourt House in the beachside suburb of Grange to make way for 60 “village units”.  His plans to vandalise the heritage-listed site were eventually blocked.

Having purchased the Dry Creek salt fields, Jurkovic revived an ambitious plan by the previous owners to build ten thousand houses, a shopping complex, schools and a marina over the salt fields. In 2019, trucks belonging to Royal Park Salvage began dumping earth fill onto the salt fields.

Comment on social media was mixed, with some welcoming the proposal, but most ridiculing the idea of establishing houses and gardens on top of a salt field, and noting that “the developer won't be required to contribute a cent toward establishing education, health, or transport services in, to, and from their estate, either.”

In 2017, Jurkovic tried to cash in on carbon offsets by flooding the salt fields nearer the St. Kilda mangroves.  Working with a university-based Goyder Institute for Water Research, a trial flooding of a small pond took place. The aim was to achieve emissions abatement through carbon sequestration and/or emission avoidance as a result of long-term revegetation. The promise of revegetation was a key feature of the flooding. It was claimed that it “could potentially return the saline and acid sulfate soils to thriving intertidal mangrove and saltmarsh wetlands that provide a suite of ecosystem services and support… important bird species.”  A spokesperson acknowledged that the trial “could not have proceeded without the help and goodwill of the University of Adelaide, Buckland Dry Creek Pty Ltd, Royal Park Salvage” and various government departments.

A Goyder spokesperson proudly announced in January 2019 that “the blue carbon work has already resulted in a revival of plant life in one salt pond after 18 months of tidal reconnection.” It was claimed that “most of the pond can be recolonised by mangrove.”

On the basis of the trial, Buckland Dry Creek installed a pump on the much larger salt fields at St Kilda in 2020, apparently against the terms of its tenancy, and reopened the ponds on the salt field.

However, the ponds had been empty since 2014 when the site ceased operating, leaving their gypsum lining to dry out, "rot", and crack. The brine immediately started to seep out into the adjacent mangroves and salt marsh area, and the mangroves, instead of revegetating the salt fields, were poisoned by them and began dying off.

Part of the irony was that the dead mangroves were first noticed next to a mangroves interpretive centre and boardwalk popular with tourists (left). Providing they sprayed themselves with tropical strength mosquito repellent, visitors could stroll through the quiet, enchanted forest of mangroves, observing marine life and birds such as the endangered Samphire Thornbill, Grey Fantail, Singing Honeyeaters and Blue-winged, Elegant and Rock parrots.

But no more. In his rush to flood the salt fields, Jurkovic has caused the death of 10 hectares of mangroves and 35 hectares of samphire salt marsh.
Despite being directed on December 24 last year by the Department of Energy & Mining to remove brine from the gypsum ponds, Buckland Dry Creek has yet to comply.

This direction was considerably weakened by the wording "...as far as reasonably practical, remove brine from all ponds within Section 2 (adjacent to the impacted St Kilda Mangroves)".

The brine is becoming stronger daily, and starting to precipitate salt, making it harder to move through pumps and pipes. The longer Jurkovic’s company can delay, the more likely they will be able to use the "reasonably practical" phrase as a "get out of jail free" card.

The SA government is unlikely to press the company too hard, having already made provision in the Agency Statements of the SA Budget 2020-21 to

With the devastation continuing, scientists say that at least 20 years will be needed before the health of the affected mangrove forests can be restored.
We can no longer tolerate the private greed of capitalists taking precedence over the community and the environment.