Women are on the move 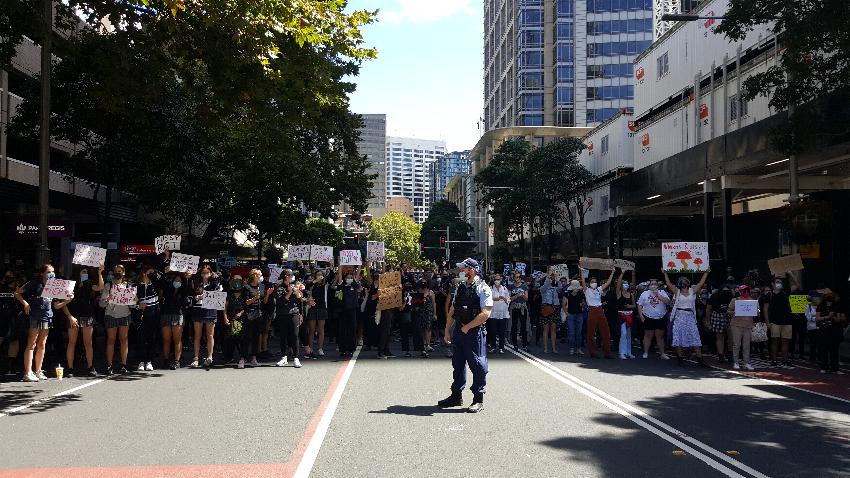 A march of strength, March 4 Justice was.

Today on my feed are pictures of rallies from all over NSW. Last night we saw and heard from round this continent. But yesterday among 10,000 or more in Sydney, I saw only a handful of friends.

Didn’t matter. Many women in black, and some men, on the train with a sense of common purpose, of going somewhere very important.

Most of us couldn’t hear the speeches. No matter. We cheered too. And talked. The light rail down George Street was closed. We filled across that large space. A friend rang and found me on the tracks.

You could call my friend ‘an activist’. Though she’s that and far more. Others ring her when they’re in trouble, because she’s always there.

I indicated my two small badges. The first, the land rights flag, was across the crowd. People understand that First Peoples women face the worst violence, the worst repression, rapes and abuse, state imprisonment and murders.

That evening, Darumbal and South Sea Islander journalist Amy McQuire on ABC’s ‘The Drum’ said it was a sense of strength and pride, that they had never given up, that they had always resisted. What an example they live!

January 26 was their gift of power to March 4 Justice.

Police learned on Invasion Day in Sydney, that people would come, no matter what threats police and politicians make. They didn’t try to stop us gathering. Or to shoot us either. Gotta laugh, Scotty. But they do kill, First Peoples especially.

My other small badge was the Eureka Flag on the red star, our party’s emblem. It stands on its own without our name stamped all over it, but my friend knows who I am and where I stand.

I said only socialism would begin to solve the problems the protest symbolised. She said that it hadn’t solved problems. I spoke of what socialism achieved despite being under attack, just a sentence. “Yes, I know a lot was achieved, but it didn’t solve everything.” Like what? I asked. “Well mainly the things that were in the people themselves.”

“Marx said that,” I said. She expressed surprise. “Yes, he said socialism was born from capitalism and bore its marks. That’s why socialism is an historical epoch. It can’t change everything at once. It isn’t communism.” I left it at that. Just a few minutes.

A token cop often chose sections with groups of schoolgirls at front to call a halt. Everyone could see the absurdity, and his powerlessness. Others would probably have swept around him. We were in that mood. Spontaneous clapping out rhythms, sometimes singing, rarely shouting.

We threaded through Hyde Park to NSW Parliament.

People are on the move

At my local suburban café this morning, Mary the owner in her sixties, said her friend also went. I said it wasn’t just about parliament. She nodded. “It’s the ones above them. The banks, big business.”

Spontaneous outpourings don’t have the staying power to lead revolutions.

For that the working class needs reorganise, for only it has the ability to stop this corporate country in its tracks.

We all have a job to do. To march and to organise, quietly from the ground up a workers’ party too.

Things are shifting. Parliament’s facade cracks, exposing the power behind. People are on the move!