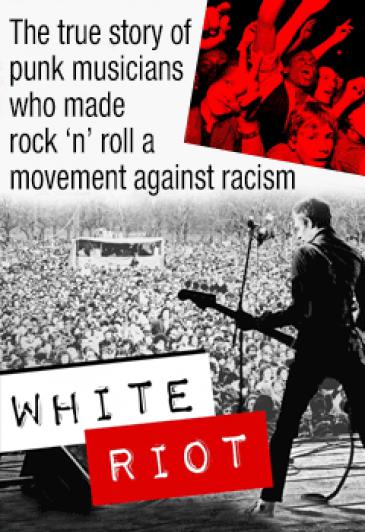 The release, in Australia, of the film White Riot has provided an important contribution toward our understanding of the forces of reaction and the ability of ordinary working people to organise effectively to combat the menace of racism.

The forces operating behind the main theme of the film are extremely historically important; they provide many insights into the age.

Originally released in the UK in 2019, the film White Riot showed how a younger generation were mobilised by the Rock Against Racism movement, which operated in conjunction with the Anti-Nazi League (ANL). It mobilised hundreds of thousands of people between 1976 to the early 1980s when both organisations were quietly shelved having served their purpose. The political climate, by the early 1980s, had changed dramatically with the election of the Thatcher administration in 1979; other political and trade-union campaigns were prioritised.

Rock Against Racism was largely a cultural movement composed of alternative rock bands together with reggae and punk counterparts which was established following racist statements from Eric Clapton and David Bowie. Both performing artistes were known to hold far-right political views. (1)

The ANL was a broad-based popular political organisation composed of progressives and left-wing groups which held together in an alliance over the single issue of combating the far-right. The Trotskyite Socialist Workers' Party was one of the original organisers of the ANL although other anti-fascists also contributed to the ANL. It was responsible for distributing huge amounts of left-wing propaganda couched in simple, easy to understand terminology for ordinary people; one broadsheet, for example, used official government statistics to show how for every immigrant into the UK, nearly two other people emigrated often to countries such as Australia, New Zealand and Canada.

The ANL were responsible for organising huge rallies with personnel from Rock Against Racism which included the Clash, Tom Robinson Band, Sham 69, Steel Pulse and many others who would play to crowds of over 100,000 supporters in London Parks. Many of the rallies and marches to the concerts attracted easy to identify supporters from across a wide political spectrum; it was often fascinating and historically of immense importance to watch young punk-rockers closely associated with anarchist political view-points, marching alongside older trade-union members, communists who had been associated with the anti-fascist rallies against Mosley's Blackshirts in the 1930s.

The music and culture of the period mirrored other dominant factors in UK society.

The period 1976 to the early 1980s was period of immense social upheaval; unemployment, which had not been a problem in the UK since the mid-1930s, started, once again, to become commonplace, particularly in large northern cities with traditional industries. The cities had also attracted first generation immigrants in search of a better life in the heartlands of the British Commonwealth. Those who were white and native-born were in competition for jobs and subsequently targeted by far-right political groups including the National Front and British Movement with white supremacist standpoints; crude arguments about sending black and Asian people back to their countries of origin were used to divide the working class.

Other significant factors, in the background to the period, also came into play and were to have a major bearing upon the problem.

The earlier period, 1970-74, had seen the dramatic wave of industrial disputes which included the 1972 and 1974 miners' strikes, which eventually toppled the Edward Heath-led Conservative government. It is, therefore, not surprising those who identified with the business-classes and that Conservative government sought to divide the opposition to the Tories. Racism was a convenient way of conducting their political business. And in the UK, with its colonial past, it is not difficult to find supporters of a racist disposition, including those in influential and government positions.

Enoch Powell, a prominent right-wing M.P. in Westminster, for example, had fanned the flames of racial hatred earlier with calls to end black and Asian immigration. His demagogic speaking style was clearly aimed toward incitement although sympathetic media outlets always presented Powell as a credible parliamentary figure.

Secondly, the incoming Labour administrations of 1974, were thrust into the forefront of two major confrontations with Apartheid South Africa, which was actively supported by the UK far-right. In May, 1975, the Wilson government took a major position along with Australian counterpart Gough Whitlam at the Commonwealth Heads of Government Meeting in Kingston, Jamaica, to condemn Apartheid and white supremacism in Southern Africa. The termination of the Simonstown Agreement by the Labour government the same year, was, likewise, a major blow to the defence and security of the Apartheid government in Pretoria which was already under siege following the Portuguese military coup the year before which effectively removed the buffer protecting both South Africa and Rhodesia.

Both developments set the Wilson labour governments on a collision course with the business sectors, which benefited from favourable trade with South Africa. The economic considerations were accompanied by intelligence operations. The publication, Inside BOSS, South Africa's Secret Police, by Gordon Winter (1981), has revealed the large-scale intelligence operations conducted in the UK at the time on behalf of Pretoria. They used many fellow-travellers to rally support for Apartheid in South Africa and the far-right in the UK. Covert funding operations also took place, as the subsequent Muldergate scandal revealed; the Apartheid regime funded front-organisations to conduct nefarious agendas in many countries, often using very subtle techniques. South African government officials were responsible for manipulating huge flows of finance for clandestine use through supporters, often for psychological warfare operations conducted through media outlets and sympathetic journalists.

Harold Wilson, decades later, continued to accuse the Apartheid regime in Pretoria of covert operations in the UK designed to undermine his governments.

It is important, therefore, to establish the lineage of the far-right, from the puppet-masters behind the scenes to their front-line bully-boys and thugs.

The UK National Front and British Movement rested upon far-right organisations from earlier in the Cold War. It is not difficult to establish their links with Apartheid South Africa and their intelligence services. The National Front and British Movement, for example, evolved out of the League of Empire Loyalists, itself linked into the British League of Rights, with parallel organisations elsewhere in the British Commonwealth, the US and Southern Africa. (1)

The Australian connection to the League was conducted through the Australian League of Rights (ALOR), whose leader, Eric Butler, had been employed as a trainer of the South African Security Police in the late 1960s. (2) Butler was a regular visitor to Southern Africa and responsible for developing extensive far-right organisations; it was noted, nevertheless, 'Mr Butler places importance on his contacts with Christian figures and others in a position to lend him platforms and a cloak of respectability'. (3)

It should be noted as highly relevant that the Apartheid Police were specialists in unconventional warfare techniques when dealing with adversaries, particularly those who challenged white supremacist standpoints. No doubt Butler taught his Security Police students well: the repressive techniques included electrical torture, sexual molestation, prolonged jail – without trial - and, on a routine basis, savage beatings. (4)

Whether these techniques were later deployed to kill ANL member, Clement Blair Peach, a New Zealand special needs teacher employed in a London Primary School who was attending an anti-fascist rally in April, 1979, which was savagely attacked by a special police unit, has never been legally proved. A subsequent 130-page government report, however, led to an official conclusion he had 'almost certainly been killed by police'. (5) An official raid on a local police station by government investigators revealed the special unit concerned had amassed a large collection of unconventional warfare weapons including clubs designed to hide outer symptoms of massive internal brain damage.

The initial political flashpoint in the UK, however, took place earlier in 1977.

The National Front contested numerous council seats for the 1977 Greater London Council elections. They won 120,000 votes with a manifesto of forced repatriation of black and Asian immigrants. Following meetings between various left-wing groups in a House of Commons Committee Room, the ANL was established. It went into immediate operation; branches were founded in most towns and cities, attracting widespread support.

Part of the political work of ANL activists was networking sympathetic groups and ethnic minorities and establishing telephone trees for mobilising supporters at short notice. Many ANL supporters soon became political activists. One example of the extent of the networking took place in the lead-up to the 1979 general election and a National Front meeting in Bradford, an area of the north of England with a high density of immigrants from the Asian sub-continent. The proposed meeting, in a school building, was regarded as provocative, to say the very least.

In nearby Huddersfield an ad hoc committee of ANL supporters took over the student union premises for a couple of hours the afternoon of the proposed National Front meeting that evening. They successfully mobilised over 1,500 people for a counter-demonstration using personal contacts and telephone-trees. After the Police provided security for the seven neo-Nazis to enter their election meeting, the counter-demonstration prevented them from leaving the premises for hours afterwards.

Following the dissolution of Rock Against Racism and the ANL, many of those associated with them moved into other related areas of political activism, including anti-discrimination bodies, the Anti-Apartheid Movement and solidarity work with Central and Latin America to name but a few, together with usual trade-union and political work.

White Riot is recommended viewing for all progressive Australians!

With the far-right gaining ground in Australia the film will provide some practical ideas about how the forces of reaction can be combated: ordinary people can change the world!

The author was an active member of Huddersfield ANL and an under-graduate at the local Polytechnic where he studied for a B.A.(Hons) in Politics, Philosophy and History. He attended many of the national and regional protests and demonstrations against the far-right during the period. He also lived in a predominantly immigrant suburb and was invited to join the local West Indian Community Centre in recognition of his work for the ANL.

Throughout the 1980s the author worked in the Manchester district as a teacher in the post-school sector and rose through the National Association of Teachers in Further and Higher Education (NATFHE) to the National Council before leaving the UK to work overseas.

On becoming an immigrant into Australia in 1994 the author returned to the shop-floor and blue-collar trade-unionism and is still a union delegate.