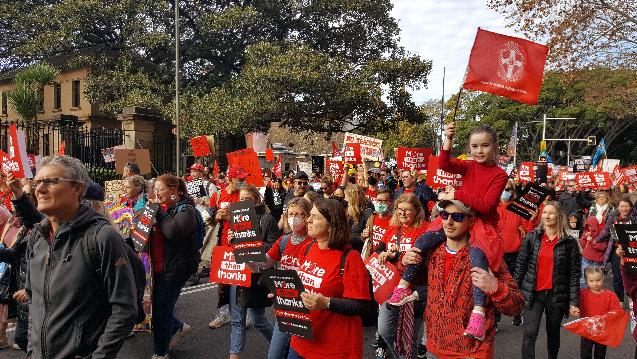 Public school and Catholic teachers in New South Wales struck for 24 hours on 30 June in a massive show of strength. 25,000 teachers rallied outside Parliament House, filling Macquarie Street with angry teachers in red and yellow t-shirts emblazoned with the campaign slogans More Than Thanks and Hear Our Voice. This is the first time public school and Catholic systemic teachers have struck together since 1996.

NSW Teachers Federation members have now taken 24-hour state-wide strike action three times in the last six months. This is the second time Catholic systemic teacher members of the Independent Education Union have struck recently, with their recent strike of 27 May the first in eighteen years.

The NSW Teachers Federation More Than Thanks campaign aims to achieve a salary that addressees the rising cost of living and also attracts and retains new teachers to our public education system at a time of dire teacher shortages. Schools across the state are seeing multiple classes having to be merged under “minimal supervision” arrangements, senior classes being sent to school libraries to work on HSC courses without a teacher and classes simply being unable to be covered by a teacher.

The Department of Education ordered principals not to share data or information on how serious the shortage is with their communities.

Teachers are also fighting against ever increasing workload over the last ten years. The Independent Education Union Hear Our Voice campaign echoes the demands of Federation. Catholic systemic teachers are facing the same difficulties as public school teachers.

The NSW Teachers Federation demands for a two-year Award with a 7.5% increase each year and a two hour increase in time allocated for lesson preparation have until now been ignored by the NSW Government and Department of Education.

A statewide  4 May strike has forced several backsteps by the government and Department. They had sought to impose a totally unacceptable new Award to be heard in the NSW Industrial Relations Commission in May. Their three-year Award offered nothing on workload and a yearly increase of 2.04%, well under the current inflation rate of 5.1%.

The day before the 4 May industrial action, the Department Secretary Georgina Harrison emailed all NSW teachers that she had called off the arbitration on the new Award until after the state budget in June.

NSW Premier Dominic Perrottet similarly backpedalled the day after the strike with an announcement that the budget would see a revision of the public sector wages.

Arbitration of the new Award has now been pushed back all the way to October.

The Premier then announced ahead of the state budget handed down 21 June that public sector wages would now be capped at 3% rather than the previous 2.5%.

Government unites teachers against it


Waves of teacher walkouts whenever a NSW Government MP enters a school continue. They began with two in the same day on 27 April at Marsden High School and Concord High School!

This is what will win the More Than Thanks and Hear Our Voice campaigns and get NSW education through the most serious teacher shortage ever. And it’s also what will result in public sector workers finally smashing the wage cap completely. Forget about the upcoming NSW state election – the organised action of the working class is what gets the goods!