Human Rights and the fight for Peace

Written by: Contributed on 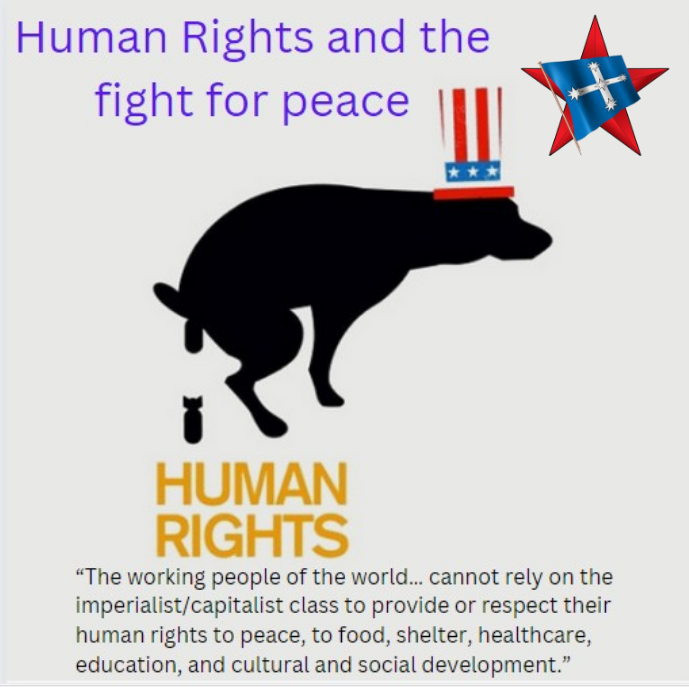 The right to live in peace is a fundamental human right. It is not merely the absence of war, but the opportunity for all people to live a full and fruitful life.

This means security of work, food, shelter, healthcare, education and access to factual information. It means genuine equality and opportunity regardless of race, gender, age, religion, sexual orientation, language, disability or occupation. The United Nations Declaration of Human Rights carried by the General Assembly in 1948 enshrined these universal rights.

Standing in the way of this is the class system of modern capitalism, developed to its higher stage of imperialism especially in the USA, but also in Europe (Germany, France) and now the formally socialist countries of Russia and China, each with its sphere of influence or domination over other economies. They both collude and compete with each other, manipulating the global economy, global finances and world trade in the scramble for resources and markets on behalf of the giant corporations, multinationals and oligarchs.

Between them, these imperialist blocs have virtually completed the territorial division of the world into their competing spheres of influence. They can only continue to expand by taking over a competitor’s sphere of influence and seizing access to new resources and markets, or by denying them to others. Hence the devastating war in Ukraine, caught between the eastward thrust of US-NATO and Russia's attempt to resist this and then to restore Ukraine under its own influence.

US imperialism has been the most dominant imperialist force. Since the Korean War and the war in Vietnam, it has fomented and led wars in Iraq, Syria, Libya, Afghanistan and elsewhere, together with a history of coups, financial crises, sabotage, sanctions and ethnic divisions, leaving famine, chaos and repression in its wake. It is the number one enemy of peace, the main opponent of nuclear disarmament, the main sponsor of human rights abuses such as in Palestine and the Philippines.

But its hegemony is now being challenged by China in particular, with its expansive Belt and Road penetration of other economies in Asia, Africa and the Pacific. China has been steadily increasing its financial and political influence. (Followed by other developing economies such as Brazil and India)

Hence the rising tension and war preparations by US imperialism in the Pacific region, aimed at threatening nuclear war on China from regional military bases, (Guam, Japan, South Korea, Australia) and the potential to control China’s access to sea lanes and deeper waters. Provocative actions like military exercises and navy manoeuvres in the South China Sea, or using Taiwan as a proxy, may very well become triggers for war.

This is the global context in which the working people of the world must struggle to assert their human rights, including the right to live in a peaceful world. They cannot rely on the imperialist/capitalist class to provide or respect their human rights to peace, to food, shelter, healthcare, education, and cultural and social development. They fight for these rights. They will fight to oppose imperialist war where the winners are the armament makers and fossil fuel monopolies and the losers are working people on all sides.

We stand on the side of struggles against military repression. We support the current fierce struggles for peace with justice in the Philippines, Palestine, the Kurdish lands, West Papua and Myanmar.

The masses of workers, peasants and oppressed peoples learn that their rights are only as good as their struggle and have to be fought over again and again. In the course of struggles against exploitation, repression, devastation of their communities and the natural environment, they are coming to the awareness that the system of greed-based imperialism must be smashed and replaced by socialism which empowers and respects working people and can roll back the other threat of climate crisis.