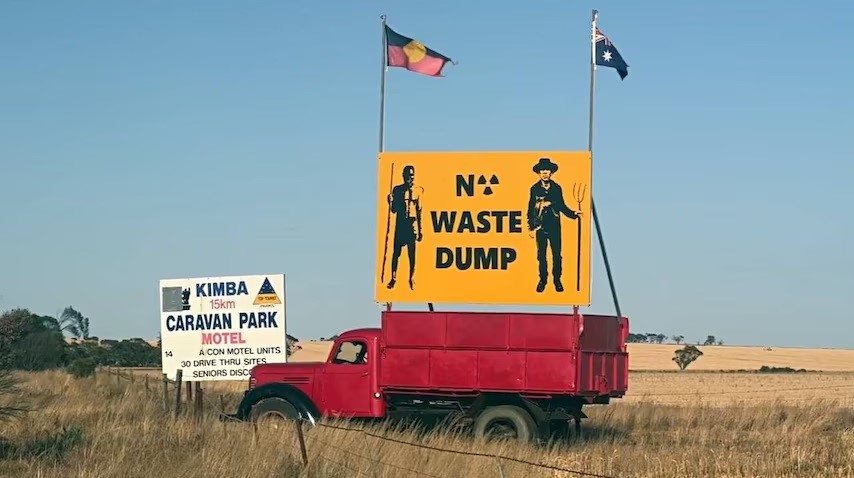 Resources Minister Madeleine King visited the Eyre Peninsula town of Kimba earlier this month to show her support for the construction of a low- and intermediate-level nuclear waste dump near the town.

The intermediate-level waste will be stored above ground in sealed containers for up to 50 years while a search is made for a suitable underground repository.  The low-level waste is mainly materials associated with nuclear medicine: gloves, swabs, syringes, mops, dressings. It can have a half-life of less than three months and is usually stored by the facility creating the waste until it is no longer radio-active, and then disposed of as general rubbish on-site. There is no need for it to be taken to Kimba – it is simply an excuse for having a nuclear dump built somewhere in Australia.

The Kimba community is deeply divided over the proposed dump.

Native title land-holders, the Barngarla are opposed to having the mine on their lands.

The Barngarla, who live in various parts of the Eyre Peninsula, were excluded from a community vote by a racist decision justified on the grounds that it was “too hard” to determine who were the members of the Barngarla.

They have since initiated Federal Court proceedings to prevent the dump.

Despite the fact that those proceedings are ongoing, the Albanese government authorised the beginning of “preliminary works” at the dump site at Napandee, 24 km west of Kimba.

Both Liberal and labor federal government have poured money into Kimba as bribes to secure community support for the dump. The third round of community grants announced on November 2, 2022 injected a further $2 million into projects such as upgrades to the Kimba District Hospital facilities, a new Kimba Youth and Community Hub, a ‘shop local’ marketing initiative to support local businesses, and refurbishment of the Kimba Op Shop. This builds on $4 million of grants and 50 projects already funded in Kimba under the program.

Referring to the Kimba Hospital funding, King said that “The upgrades to the Kimba Medical Centre will drive health and social improvements in a community that sorely needs it.” No-one would begrudge any rural community such an upgrade, but it should be funded on the basis of need by the Minister for Health, not as pro-dump pork-barreling through the “National Radioactive Waste Management Facility Community Benefit Program”.

Many regional and remote communities could make out a very strong case for “upgrading” of existing – or introduction of new – medical facilities.

Existing South Australian legislation makes the construction of such a facility, and the transportation of wastes to it, illegal.

The Keating government began searching for a site to store the nation’s nuclear waste as early as 1992.

In 2012 the Gillard government passed a controversial bill to create the nation’s first nuclear waste dump – saying it hadn’t yet decided on a location, although many believed it was destined for remote Aboriginal land in the Northern Territory.

Cabinet papers from 2002 released in January 2023 show that the Howard government was already looking at Kimba and at using federal law to override the SA legislation. They also discussed compulsorily acquiring the site as a way of extinguishing native title over it. That was in fact what occurred, allowing former Resources Minister Keith Pitt to say that the Barngarla were not entitled to a say over the dump because they were not the native title holders to the site.

We hope that the Barngarla succeed in their Federal Court action, but they need the visible and vocal support of Australians around the nation.

Further reading:
Our comment on the decision to exclude the Barngarla from the community vote
The Barngarla appeal for support
General background on Kimba and the dump proposal
On the official announcement of Kimba as the site for a nuclear dump
Important background on Labor’s Resources Minister Madeleine King and her ties to the mining industry