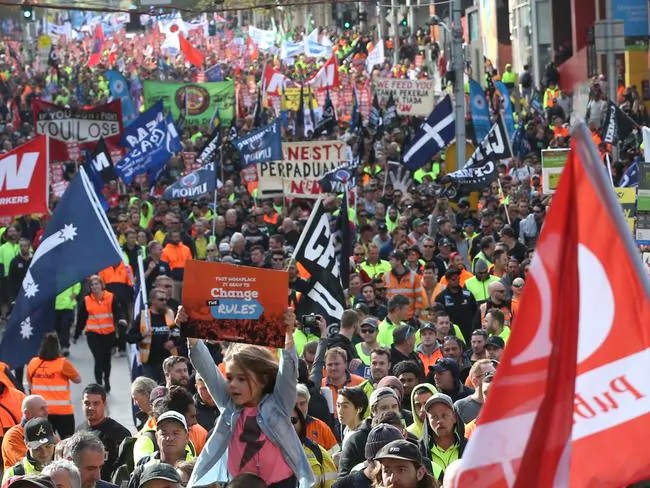 The first was the Fair Work (Registered Organisations) Amendment (Withdrawal from Amalgamations) Bill 2020. It removed legal barriers to amalgamated unions demerging after the five-year cooling off period had passed. While the law itself appears rather innocuous, giving union members the democratic right to vote to demerge if they wish – though final decision rests with the Fair Work Commission (FWC) – its real aim is to split the Construction, Forestry, Maritime, Mining and Energy Union (CFMMEU), to isolate the more militant Construction and Maritime divisions and clear the way for further targeted attacks on the strongest sectors of the union movement.

For the past 18 months the government had failed to get the necessary support for its nuclear strike option targeting the more militant Construction Division in the form of the Ensuring Integrity Bill. Fear of widespread fallout hitting all unions meant the union movement was, even if somewhat reluctantly, united in opposition to the bill. By contrast, this new legislation was a well-placed surgical strike.

Drawn up in collusion by the federal government and disgruntled right-wing Labor Party aligned officials from the Mining and Forestry/Manufacturing divisions following two years of well publicised infighting in the CFMMEU, it took less than 24-hours from when it was introduced for both houses of parliament to pass the bill into law with the full support of both the government and the opposition Labor Party. The silence from the Australian Council of Trade Unions (ACTU) and many other unions was deafening.

Whatever the internal tensions that exist between the official leadership of the various divisions and branches in the CFMMEU, no solution that really benefits the interests of the union’s members and the broader working class can come from union officials running and collaborating with the rabid anti-union and anti-worker government of the ruling class.

The move to demerge, far from being an initiative of the rank and file for more democratic control of their union – something that all class conscious workers would support – is rather a cynical move concocted by union bureaucrats which serves the long-term interests of the bosses dividing and weakening the organised workers’ movement.

The fate of the unity of the amalgamated CFMMEU now lies in the hands of the rank and file members of the Mining and Energy Division who are expected to vote on the future of the division in the near future. If they choose to leave, the Forestry/Manufacturing division is likely to follow close behind.

Don’t get hit by the Bus

The second piece of legislation is the Fair Work Act (Supporting Australia’s Jobs and Economic Recovery) Bill 2020 – commonly being referred to as the federal government’s Industrial Relations Omnibus Bill. Although its name suggests that these reforms have been brought together to deal with the economic downturn connected to the ongoing global pandemic, the proposed changes in the bill have been on the wish list of big business for a long time before the pandemic began.

On the whole, the reforms have been designed to do one thing – increase profit for business at the expense of workers’ pay and conditions. In particular, many of the proposed changes target casual workers, workers in insecure and low paid work, and the unorganised.

There’s no denying that these attacks on workers’ rights are drastic and severe. Yet it is also not the root and branch shake up of the entire industrial relations system that some in the boss class were hoping the government would push for under the cover of the pandemic.

With a federal election looming in the not-too-distant future, Morrison has made clear that IR reform is not going to be the hill which his government dies on. Nor are the crossbench senators that the government needs on side to pass the legislation likely to want to be seen attacking working people after they have already made so many sacrifices during the pandemic. Better to claw away whatever conditions they can get away with now, and try for more later.

Indeed, the government has already announced that they are dropping one of the more blatant attacks of the bill after crossbench senators said there was no way they would support it. The proposal would have allowed employers ‘affected by the pandemic’ to undercut the legal minimum conditions of Industry Awards by creating Enterprise Agreements that didn’t have to meet the requirements of the Better Off Overall Test (BOOT) in the Fair Work Act. It’s the kind of outright assault on workers’ conditions reminiscent of the Howard government’s WorkChoices, a connotation Morrison’s government is hoping to avoid.

Just how much the dropping of the BOOT changes placates the crossbenchers remains to be seen, though it’s likely to give ground to the government to argue for the passage of the rest of their ‘modest’ attacks.

Of course, the remaining attacks are anything but modest. Among them are proposals that:

And to help ram these attacks through, the government has tied it all up in a neat ribbon of deception with a toothless federal anti-wage theft provision that undermines more rigorous recent state laws passed in Victoria and Queensland.

Whatever shape the final bill takes when it’s voted on in the coming months it must be fought. So far, the official union movement’s response to these new attacks has been nothing short of underwhelming, relying on not much more than lobbying of the crossbench senators begging them not to pass the Omnibus Bill.

For five months the ACTU was party to round table talks with big business lobbies and the government about IR reform. During that time there was not a whimper about the need for workers to get organised and prepared to fight. The ACTU were completely side swiped when the draft bill was tabled. Did the they seriously think they could protect workers’ rights by being “partners” with big business? If ACTU secretary Sally McManus’ speech at the National Press Club in early December before the announcement of the Omnibus Bill is anything to go by, she certainly did: “The union movement has had its national role returned to where it should always have been – as a widely accepted part of Australia’s civil society, and a trusted social partner for Governments and business.”

This outright class collaborationism and compromise is reminiscent of the major sell-out of the Accord and exactly how the trade union movement has gotten to its weakest point in decades. It’s the kind of approach to class struggle that’s as dangerous as the attacks coming from big business.

We should have no illusions in the government or the bosses that they will willingly look after our wellbeing. Every gain, every benefit, every measure that serves the peoples’ needs must be fought for and won from the hands of the ruling class. They will never give it up for free. It is not class collaboration, but class struggle; not begging, but the strength of the people organised that will force the demands of the people to be met.

As workers, we need our own demands, our own priorities, and our own organisations to take up the fight and be prepared to organise and mobilise. We need an independent working class agenda and movement that starts from an understanding that as workers our interests are not the same as the interests of the capitalist ruling class and their institutions of class rule, like parliament and the courts. An independent working class agenda would not subordinate itself to the electoral interests of parliamentary parties, nor would it line itself up with the interests of businesses to “keep the economy going”.

Real working class leadership will not come from the ACTU and class collaborationist union officials. It will come from rank and file organising in work places often in opposition to union officials who seek to compromise unnecessarily. It will come from union delegates and organisers with unyielding commitment to class struggle politics. The role of the Communist Party, as a strong, disciplined organisation of the working class is central to bringing together these committed activists to co-ordinate, analyse, strategize, and push forward the struggle for an independent working class movement.

Demands will change with different workplaces and communities, but the common thread must be the working class taking independent action to build its capacity to fight as a class in its own class interests. It will require mass, militant, and sometimes illegal, action by large sections of workers – the victories of our class have always come from waves of militant struggle on the jobs, in communities and in the streets.

None of it is easy. But it is the only way forward if the union movement is to turn itself around and really fight back the constant attacks from big business and their puppets in government.