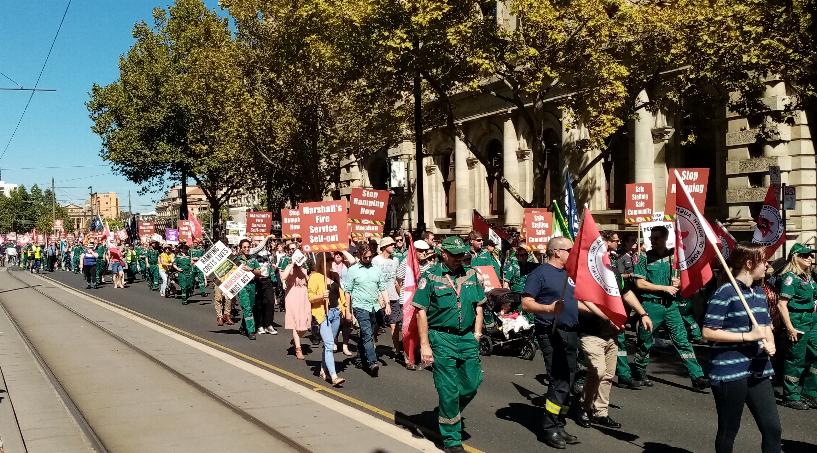 When the federal Labor Government under Hawke and Keating legislated in the early 1990s for Enterprise Agreements to become the main method for workers to protect and advance wages and conditions, the ACTU leaders at the time told workers it was the greatest thing since sliced bread.

So, the new system not only facilitated a divided and conquer strategy across whole industries and even within individual companies with more than one workplace, but it enabled companies to accelerate their efforts to smash workers' collective strength through non-union Agreements.

Future Governments after Keating had gone went even further through Work Choices and then the various forms of Fair Work Act termed “Work Choices Lite” by many workers.

Workers’ struggles continued despite the limited options to take strike action and there are examples right now of these courageous struggles which at the same time show the need to break through the shackles of enterprise specific bargaining.

For example, in Victoria McCormick food production workers have been on strike for over five weeks to defend conditions such as rostered days off and to break the company's five-year wage freeze, a real wage cut.

In NSW and SA, workers at Symbion Pharmaceuticals went on a 48-hour strike in pursuit of better conditions and a pay increase. This was the first strike action of these workers for many, many years. However, the workers under the Enterprise Bargaining system come under two separate Agreements. An example of divide and conquer within the one company.

Meanwhile in industries such as security, workers performing the same type of work across hundreds of worksites by multinational companies like MSS and Wilson Security are not able under the Fair Work Act to collectively bargain for even a company-wide Agreement let alone an industry or multi-employer Agreement.

The defenders of the Fair Work Act will cry out, "No this is not true, workers can negotiate a multi-employer or industry wide Agreement".

However, what they don't say is that the Fair Work Act, brought in by the ALP after Work Choices, does not allow workers to legally take ANY industrial action in pursuit of a multi-employer or industry wide Agreement.

Even in the State industrial relations jurisdictions, enterprise bargaining mirrors the federal system in that the major employer in the State systems, the State Governments, use the enterprise agreement system to divide and conquer.

So, we see the situation now in South Australia where ambulance officers, fire brigade workers, hospital workers are all fighting for safer workloads, increased staffing, shorter working hours and safe rosters and wage increases. However, each sector of these government workers has its own Enterprise Agreement.

Just before Easter break in South Australia, the ambulance officers/paramedics and the firies from the Metro[plitan Fire Services organised a stop work and rally and demonstration in the streets of Adelaide demanding increased staffing in particular for their own safety and for better service to the public.

Workers from all other areas of the public sector, including duty police at the demonstration who were clearly sympathetic to the demonstration's cause, joined the ambulance officers in solidarity.

Labor's mantra for the next Federal Election is that they stand with the people. Assuming they win the next federal parliamentary election, a mighty mass movement of workers will surely test them out.

One area of struggle that workers will put Labor under the microscope, if they are next government in Canberra, is to what extent Labor supports workers' right to struggle collectively across industries, across multiple employers and across the bosses' supply chains to defend and advance workers' collective interests.