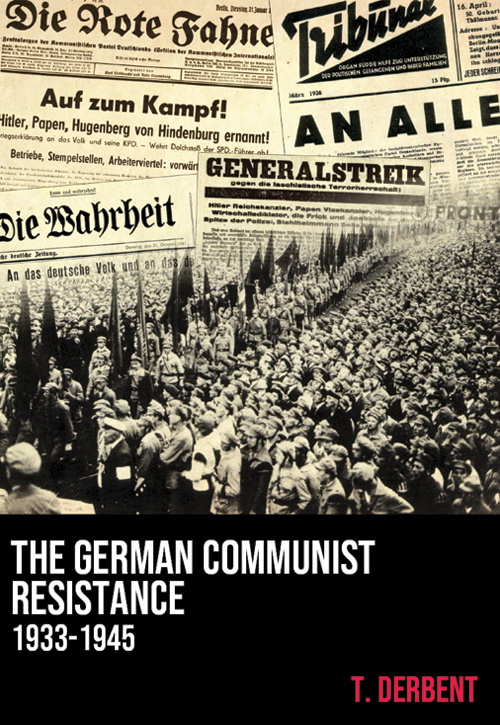 The extraordinary, courageous resistance to Nazi fascism by the German Communist Party (KPD) has been deliberately and pervasively hidden, ignored, and written out of history.

This book starts to redress this omission.

It outlines the truth of active, ingenious and incredibly brave resistance within Germany, in the occupied countries, inside the German military (the Wehrmacht), in the International Brigades in the Spanish Civil War, and in the concentration and labour camps.

By 1933, the KPD was a large, powerful organisation, having organised around one million people, including a militia of one hundred thousand, and then an anti-fascist league of 250,000, to resist the Nazi SA, and the Social Democrat-controlled police that came to rescue of the Nazi SA storm troopers.

The Social Democrat governments willingly administered the capitalist system, and actively and callously suppressed any serious opposition, especially from the KPD and from any unions and workers that it did not control, using any political, legal and police/military means.

The KPD had to navigate its way through a complex situation which featured quite wide, though rapidly waning, working class support for social democracy, despite its pro-capitalist stance; the growing threat of fascism under the despair of the Great Depression; and the need to defend the working class in particular from the treachery of the Social Democrat governments. The European Communist Parties followed a line of opposing and condemning social democracy as “Social Fascism” because of its facilitation of the growth of fascism, and, at the same time, building a united front against fascism from below, endeavouring to draw in supporters of social democracy.

When the Nazi Party grabbed power in 1933, the Social Democrats not only refused to co-operate with the KPD to resist and overthrow the fascist rule, but completely capitulated to the fascists. They refused to support a general strike, the prospect of which terrified the Nazi leadership which was unsure it could survive one. The Social Democrats actually handed lists of communists and militant unionists to the Nazi police for arrest and torture and/or murder. They declared that they would “support the new order” and approved the Nazi foreign policy program.

Over the period from 1933 until the Nazi defeat in 1945, hundreds of thousands were arrested, imprisoned and/or executed for political opposition The Gestapo constantly hounded, and rounded up opponents (mostly Communists), but as soon as a network was destroyed, Communists set about recreating it, and propaganda re-appeared, agitation amongst workers resumed, and strike activity gradually increased as the Nazi rule went on. Communists who had been arrested, then later released or escaped, immediately set about organising cells, networks, propaganda and sabotage.

This activity occurred in factories, suburbs and concentration and forced labour camps, where Communists established networks for German and foreign workers and POW's. These networks sabotaged production so extensively that 80% of military products from the Dora factory were scrapped; ¾ of the rifles produced at the Gustloff plant were unusable, and, of the 120 Heinkel177 bombers built in1943, none were usable. Many ships transporting war materials were sunk.

Communist took over administrative responsibilities in many camps, to ameliorate conditions for inmates, especially Jews and Soviet POW's. They also organised military detachments in several camps to prepare for liberation, and actually took over the Buchenwald camp and arrested the SS guards before US troops arrived.

In the occupied countries, Communists agitated and established resistance networks within the German military to undermine the effectiveness of the Nazi army, and to funnel information and arms to the local resistance. Many German soldiers joined the local resistance and fought against the Wehrmacht. In Brive, France, 350 soldiers, led by their colonel, went over to the resistance. Germans fought with the resistance in Greece, Yugoslavia, France, Poland, the USSR, Slovakia, Albania, Denmark and Italy.

These activities occurred despite the collaboration of many governments and authorities, especially police forces, in the occupied countries.

The Allies exhibited attitudes ranging from ambivalence to hostility toward the Communist -led resistance (except perhaps for Yugoslavia). This morphed into active opposition as Nazi defeat neared. The resistance network in Leipzig had begun clearing and de-Nazifying the city before US troops arrived. However, the Americans refused a nominee for mayor from the resistance committee, instead appointing a conservative politician and banning the committee.

Firstly, bourgeois histories of Nazi Germany and the internal resistance always focus predominantly on the July 20 assassination attempt against Hitler. This was organised by a group of aristocrats and military officers, most of whom were motivated principally by anger and despair that Hitler was leading Germany to defeat, and fear that defeat would likely result in a Communist revolution. They sought to eliminate Hitler, arrange a peace with the capitalist Allies, and then turn German forces to the east to fight the Soviet Union.

The White Rose group of young Catholics in Munich is also often mentioned. The only Communists, or Communist-sympathisers, routinely mentioned are those of the Red Orchestra group that passed information to the USSR.

The bourgeois consensus is that the sum total of these resistance activities made little impression on the effectiveness of the Nazi war effort.

The silence about, and denial of, the active, widespread and quite effective Communist resistance by bourgeois historians is not accidental. German historiography (the writing and interpretation of history) is dominated by the lies, biases and orthodoxies arising from the continued employment and domination after the war of Nazis, or supposed ex-Nazis, throughout West German structures, including government, police forces, universities and legal institutions, fostered and protected by the USA in particular. It is part of the anti-Communist propaganda that seeks to take any credit away from communists, and to reinforce the  line that fascism and communism are both totalitarian – two sides of the same coin.

It is an example of the class nature of history, and indeed all knowledge. Historians are biased, depending on their world view, and loyalties and self-interest. Historians can lie; they can selectively cite or acknowledge particular facts; they can ignore or downplay others, either consciously or unwittingly because it suits their pre-conceived view; they can lazily and uncritically repeat orthodox claims or common words, such as the pejorative term  “Stalinism”, without bothering to ask what that really means or to check whether it is based on real evidence. They place value on facts or events. For example, one well-known historian equates the crimes of the collaborators in occupied France with the punishments handed out to them by the Resistance after the war. Treating unequal things as equal, whilst it appears to be even-handed, is really a subtle form of bias, and projects an ideological message.

The deletion from historical accounts of the Communist resistance during WW2 is a form of propaganda.

Secondly, we salute the astounding bravery, heroism, ingenuity and dedication of the hundreds of thousands of German communists and other militants and democrats who stood up against the vicious, fearsome brutality of the Nazi fascists, as well as the millions who fought them across the occupied countries.

They refused to be defeated. What brave, brave heroes.