Morrison budget and their business cronies: their values and ours! 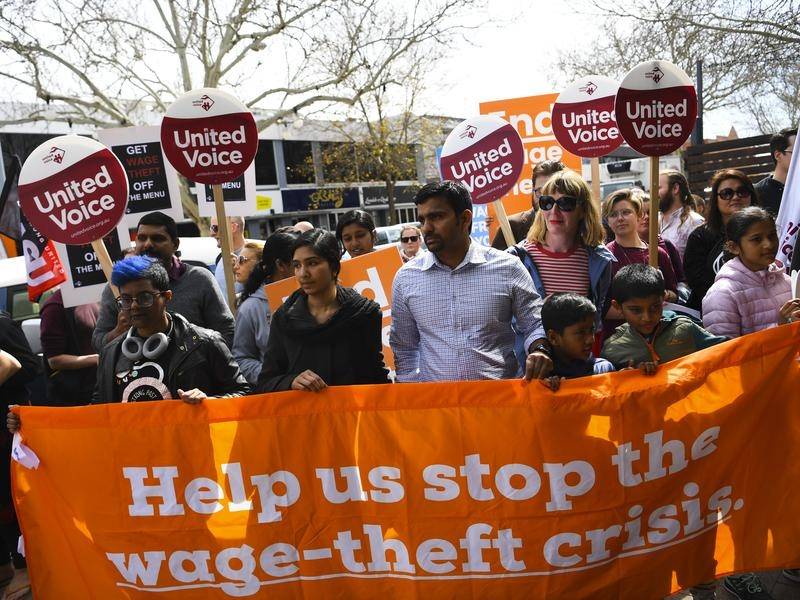 Almost hidden in the small print of the recent Morrison coalition government budget lies an extra allocation over the next four years for the Registered Organisations Commission (ROC), a shadowy employer's organisation. The present Australian government, in addition, will also provide $10 million for reducing the costs of Award compliance for employers.

While the budget allocations were announced as designed to assist employers meeting their obligations, the opposite is a far more likely scenario.

It is unlikely to remove widespread wage theft: the penalising of workers at the hands of unscrupulous employers, which has become a standard business practice.

The allocation of an extra $8 million to the ROC in four annual allowances, was announced in the budget as a measure designed 'to ensure registered organisations acted responsibly, fairly and in compliance with their obligations under legislation … and … help employers meet their Award obligations'. (1) The ROC, for all intents and purposes, is used by governments as a trade union regulator. Widespread concern, however, has existed about wage-theft since revelations surfaced that under-payment for Australian workers amounted to an estimated $1.35 billion in 2019. (2)

Studies of wage-theft in the construction industries revealed the problem amounted to an annual $320 million, in healthcare $22 million, and retail $180 million. (3)

The matter has been made all the more obscene by the fact that many of those being deprived of correct wages and appropriate terms and conditions of employment remain in the category of the low-paid, existing on a national minimum wage of $19.84 per hour. While the full week of 38 hours amounts to $753.80, the move toward a part-time working week has enabled the business-classes to reduce terms and conditions correspondingly.

Behind the political spin of the Morrison coalition government line, however, the problem of wage-theft will not be dealt with by an extra allocation to the ROC. Established in 2017 with the primary function of ‘increasing financial transparency and accountability’, the government department is essentially an investigatory body possessing wide powers. (4)

Whether it is even suitable for dealing with wage-theft is open to dispute.

While the extra budget financial allocation will be used to provide business software developers to integrate information about Awards, and terms and conditions of employment for the Australian workforce, the mechanisms used have been intentionally shrouded in bureaucratic secrecy and political chicanery. It is far more likely the budget allocation will be used to further erode terms and conditions of employment for millions of workers who already have difficulty challenging employers.

While employers have continually cited complexity of Awards as the usual excuse for under-payment of wages and flouting terms and conditions of employment, trade-union members and shop stewards, often with a minimal education usually have no problem calculating their entitlements and informing their colleagues. It is, furthermore, important to note in usual legal circumstances, ignorance is regarded as no excuse for breaking laws, except, of course, when it comes to the Australian business-classes and their treatment of vulnerable workers.

The ROC budget allocation was also accompanied by a further $10 million government provision for reducing the Award compliance costs of employers; a bureaucratic system will be established to provide employers with information about obligations.

Recent political chicanery by the Morrison coalition government, however, has revealed how seriously they take unscrupulous exploitation of vulnerable workers by employers.

While the Morrison coalition government had previously promised to criminalise wage-theft, the sections of legislation were eventually withdrawn to appease their business-cronies, many of whom regard wage-theft as normal business practice, the natural outcome of race-to-the-bottom, cost-cutting mentalities. Present penalties for employers not conforming with Awards are clearly not a deterrent; in fact, many of those eventually identified have been shown to be serial offenders whose only punishment was a slap on the wrist.

The real reason for wage-theft lies in government and business attempts to undermine trade-unionism. The problem is further compounded by widespread casualisation which has seriously weakened workers’ ability to challenge employers, together with the development of business practices which include the re-introduction of master-and-servant type industrial relations. They have had their effect upon the trade-union movement. Casual workers are also vulnerable to instant dismissal with their only entitlement being four hours pay for arriving at their place of employment to start work, which amounts to a deterrent for joining a trade-union and standing up for their rights.

Current trends in Australia reveal how the business-classes have systematically undermined traditional Award wages and terms and conditions.

Full-time employment for the Australian national workforce has recently decreased to 8,874,200 while part-time work has increased to 4,203,400. (5)

When relating the figures to payment of wages, it is possible to establish why employers have pushed casualisation and part-time employment. An Australian full-time average weekly wage is calculated at $1,463, while part-time work is calculated at $577. (6)

A further breakdown of relevant statistics has shown a growth of individual workplace 'agreements'; those employed on Award-only conditions account for 21 per cent of the workforce, those on Enterprise Bargaining Agreements (EBAs) total 37.9 per cent while individual arrangements have risen to 41.1 per cent. (7)

While the latter category is still covered by Award provision for wages and terms and conditions of employment, other factors come into play: systematic wage-theft is most likely in this category, as employers deliberately flout their responsibilities by allowing workers to have 'flexible' working arrangements. Part-time students and parents with child-care considerations are among the most vulnerable. Many of the so-called 'flexible' working arrangements also include outside-of-usual working hours provisions which have tended, historically, to be difficult to police by trade-unions and regulatory bodies.

A typical example of the problem is in the manufacturing industries with overtime terms and conditions and meal allowances. An employee working more than 1.5 hours overtime at the end of their usual shift is allowed a twenty-minute break before they begin their overtime. If they are asked to do so the same day, they are also allowed a $14.70 meal allowance for the inconvenience caused. (8)

Many employers flout such entitlements for members of their workforces and then benignly excuse their behaviour with comments such as 'why didn't you tell me?'.

An Award provision, furthermore, which is frequently eroded by employers takes place when they ask employees to begin their usual shift early; an afternoon shift worker whose usual starting time is 2 pm can be asked to start at 12 noon. Overtime, however, is strictly calculated from the end of a standard 7.6-hour shift. Technically, therefore, an employee starting two hours early is allowed a twenty-minute break at 8 pm, together with their usual meal breaks. It is comparatively rare for employers to honour these Award provisions. Workers, likewise, are often frightened to complain for fear of not being asked to work overtime again.

The failure of employers and their cronies in government departments to implement the appropriate competency standards to ensure the correct pay-grade for workers in relation to the skills and expertise they use in their workplaces, is yet, another example of wage-theft.

In conclusion, the recent Morrison coalition government budget allocation of $18 million to deal with employers not honouring legal obligations with Awards is highly unlikely to deal with the problem. It is far more likely to be a bean-feast for lawyers employed by government bureaucracies to create mechanisms and procedures favouring their own, at the expense of millions of Australian working people.

But then, such behaviour is strictly in keeping with their values; they have little respect for ordinary working people although they take great care to state otherwise.