NT Intervention must be “cleaned out” say conference participants 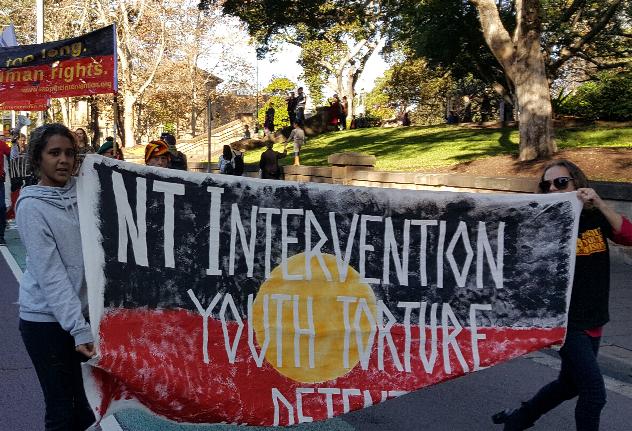 Mongunu Ian Gumbula, Daygurgur Gupapuyngu Elder of northeast and southeast Arnhem Land, says First Peoples are looking for “what is good for everyone.”

Speaking at a landmark two-day conference challenging the Northern Territory Intervention, he says, “Our people are strong. They know what is best to go forward. We know best.”

To protect children Mongunu says, “The best way is to protect culture…If we are strong, our young people will be strong.”

He states, “Everything comes from our Land – our resources, our language, our songlines, our practices, our law. The land got everything for us.

“It was protecting us from the beginning.”

Mongonu says of the Intervention, “We need a way of cleaning up or raking all those things out first. Then before we can sit down on a clean platform together and work on what is good.”

She praises the role of Aboriginal women, saying they “have led the charge in Central Australia.”

Strong Grandmothers of the Central Desert grew out of the fight to keep kids out of custody. A co-founder, Aunty Elaine Peckham says, “We still have our voices. Nothing has taken that away… We’re survivors.”

“Our cultural values and obligations have made us strong all our lives. We’ll just continue being ourselves, having a voice… We must never give up. For our grandchildren, our great grandchildren.”

Amelia Kunoth Monks and Barbara Shaw speak of the ongoing importance of women’s night patrols in Utopia and in Mparntwe (Alice Springs).

Aunty Barbara talks about collective love and responsibility. Often grandmothers themselves, night patrollers tell children on the streets at night that their grandmothers love them. Such words are powerful medicine to counteract the poison of colonialism and its Intervention.

Amelia Kunoth Monks has also learned from her grandmother, prominent NT Elder Rosalie Kunoth Monks, “When you give up and lie down, they’ve won.”

“It has been instilled in me who I am. We have to maintain who we are.”

Ms Kunoth Monks speaks of the need to “be on our homelands and help ourselves, without the white man’s ‘helping hand’.”

Well-resourced homelands have proved to be the healthiest option, but especially for the young, says Professor Marks.

Mongunu says, “We need to be looking at a better way of doing justice and supporting young people and supporting young adults, male and female . That’s the sort of thing that should be in the hands of our people, our Elders, our leaders because the responsibility lies within us.”
Instead, the Intervention spent many millions inserting police complexes into communities like Yuendumu. From there, after the fatal shooting of Kumantjayi Walker, Dr Anthony states, came the demand: “No guns in Community!”.

This call ricocheted across the Territory and the world. “Aboriginal Peoples are taking control of safety,” she says.

Long term anti-Intervention activist and NSW Greens MLC David Shoebridge suggests this mainstream voice is essential if we are to end the Intervention, and drive a wedge into bipartisan parliamentary support.

Aunty Barbara states pressure needs to be put on Federal Minister Ken Wyatt. She sees a family-oriented focus as important.

She and Aunty Elaine co-signed an open letter to Mr Wyatt, on behalf of the Intervention Rollback Action Group, outlining the Intervention’s devastation and what needs to happen instead. It calls for action incorporating the United Nations Declaration on the Rights of Indigenous Peoples articles that Australia currently breaches.

Restorative justice from the ground up

Larrakia Anmatyerre man John Rawnsley works for the NT Aboriginal Legal Service. He began with a joke “to lighten the mood”. Humour is embedded in First Peoples’ ancient culture and remains a survival strategy of diminishing seemingly unbeatable colonial barbarity.

He says he finds “where I can make a difference”, identifying and developing allies, friends and networks.

Northern Australia Aboriginal Justice Agency is “doing a lot of work with educating lawyers, taking law students on to Country.”

Kendall Trudgen is an ally born and still living in East Arnhem Land. He speaks on behalf of Yolngu Elder and independent NT parliamentarian, Yingiya Mark Guyula, who was involved in an Elder’s funeral ceremonies.

The first aims at the governing unit of Arnhem Land, where all are “united on self-determination, sovereignty, and empowering traditional governance.”

The second aims to “move forward in self-policing”. Mr Trudgen says “there are more police than ever in Arnhem Land”, who make it hard for Elders to assert authority and employ restorative cultural solutions on Country.

Third, Mr Trudgen says, is “to build self-determined economic relationships from the ground up.”

In a statement read to the conference, Yingiya Mark Guyula likens the Intervention, and resistance to, it as a war.

After 14 years, First Peoples are organised and determined to end this 14-year obscenity.

Final speaker, Melbourne-based Arrernte woman Celeste Liddle speaks of colonialism’s creation of “purposeful wedges... country and city... black and white”.
“So, what we need is full prior and informed consent.

“Aboriginal Peoples need to be in control of their own affairs. Treaties, whatever, it must be not negotiable. The right to land, water.”

Her last words are understated and quiet. “It needs a pretty strong fight,” she says