Touch one, touch all – fighting call of the working class 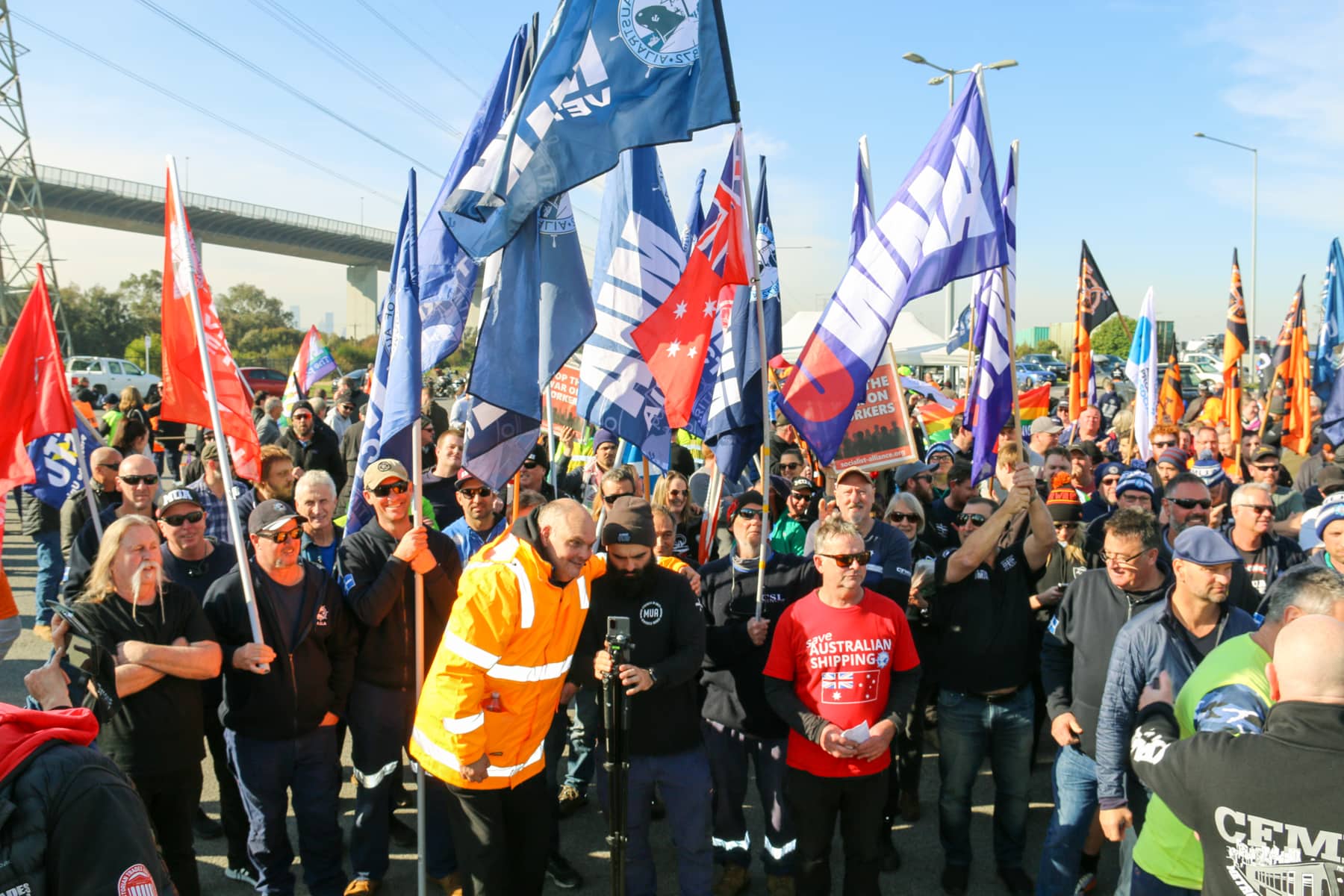 Maritime Union of Australia members across Australia are gearing up for a long and hard fight against Svitzer-Maersk, the biggest global multinational shipping company.  Svitzer, owned by Maersk, operates 104 tug boats in Australia.

For 2 years the MUA has been in drawn out EBA negotiations with Svitzer.  MUA members around the country took 29 industrial actions against Svitzer during the tough EBA negotiations. An in-principle agreement had been almost reached and signed off. Until Covid-19 broke out and the company used the cover of the pandemic to slap on 30 new demands stripping back many hard fought conditions MUA members had won over 80 years.  Whilst Svitzer cried the pandemic was ruining its business, the parent company Maersk recorded $2.6 billion profit.  It’s a story repeated across the country in all industries and workplaces.

Repeatedly MUA members unanimously voted down the 30 new company demands that wipe out their rights, wages, job security and conditions. They succeeded in pushing back 20 of company’s new claims, but Svitzer is determined to abolish job security and push through casualisation of tug boats crews by refusing to budge on its remaining 10 demands.
In December 2020 Svitzer sacked all tug boats crews in Sydney and Geelong.  (See Geelong maritime workers fight for jobs) For six months Geelong tug boats sat idle, but in June 2021 Svitzer flew in labour hire workers on lower wages and conditions to replace the sacked tug boats crews.    Svitzer had contracted out its workforce to labour hire company Strategic Workplace Solutions.
Nationwide fighting campaign
On Friday 9 July at 12pm, at the start of a nationally coordinated campaign, 22 MUA members working for Svitzer-Maersk at Webb Dock in Port of Melbourne walked off the job for a 12 hour stoppage.  They were met by hundreds of cheering Victorian unionists from many unions pledging solidarity.
Speaker after speaker from different unions strongly pledged their unions’ support for the MUA members’ fight against the multinational’s attacks. Speakers invoked the long and victorious 1998 MUA struggle held on the same Webb Dock site 23 years earlier.  It was only the mobilisation and unity of the working class, unions and communities on the ground, especially the months long powerful and disciplined 24 hour community picket outside the Webb Dock gates, that succeeded in pushing back the shipping bosses and the government’s agenda to smash not only the MUA but all unions and the organised working class. 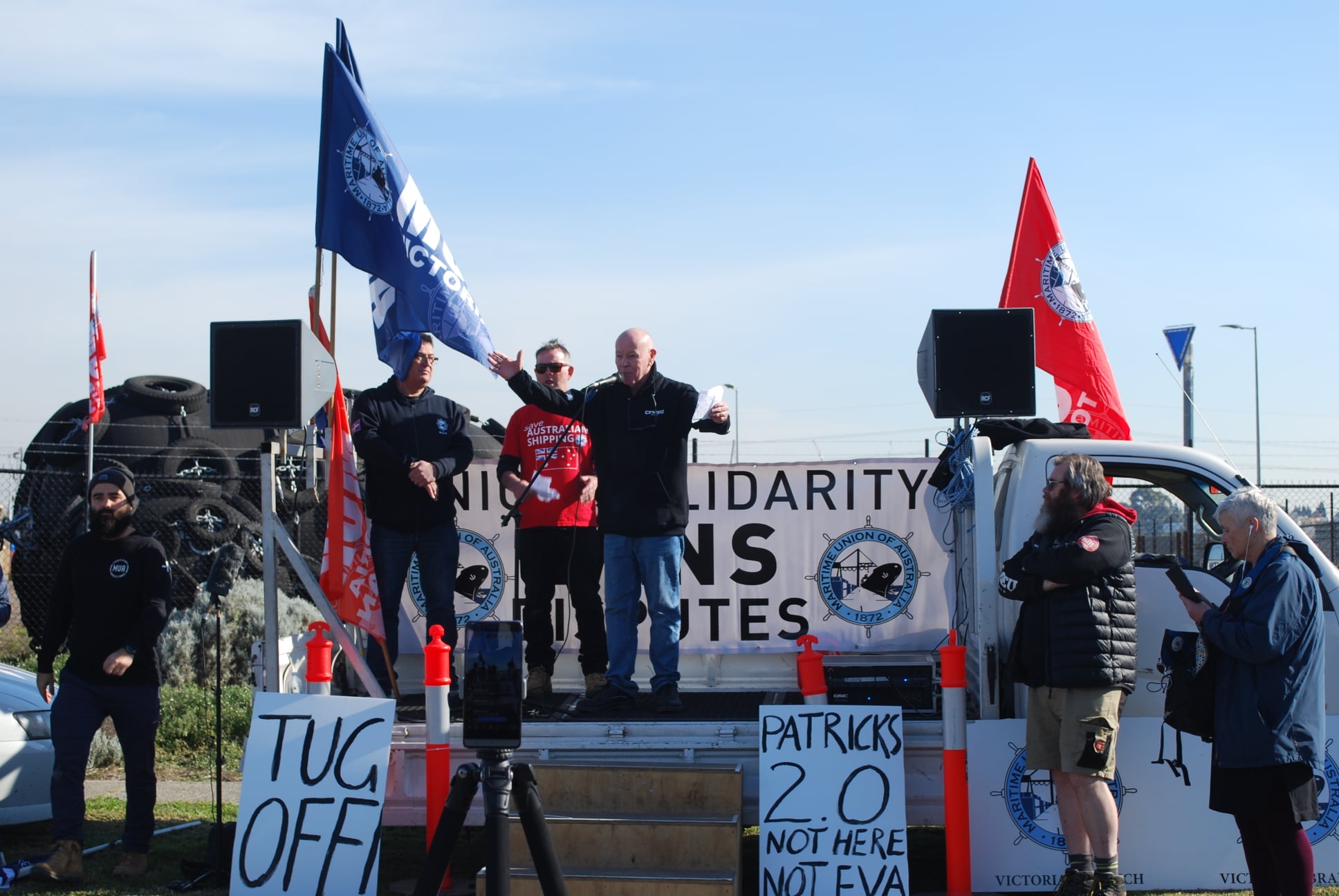 Christy Cain, National President of the MUA, sent a warning to Svitzer-maersk that the MUA is not afraid of taking on multinational corporations.  “We took on Rio Tinto, BHP, Chevron, Alcoa (Portland in Victoria). We have been fined, sued, maligned but we’re still standing here today.”
The MUA has launched a nationwide campaign of collective working class struggle taking on Svitzer-Maersk. The fighting campaign will be a long and protracted struggle “until every one of the sacked tug boat workers is reinstated permanently and the company abandons its agenda of casualisation and slashing workers’ rights, wages and conditions.  It will be a week in, week out, month in, month out struggle, until workers’ job security, wages and conditions are protected”.
“Every one of the 32 unions in Victoria will be asked to come together as one, to fight as one, to win as one”, said Christy Cain. “All bets are off, no more talk … if they want to meet us they have to agree to a union agreement – put people back on the tug boats in Geelong and Sydney!”
The national campaign will reach out across the country, from port to port. All Maersk vessels will be affected by industrial action.  On Friday 16 July at 12:30pm a joint unions rally outside the Maersk office in Kielor, Melbourne, will kick off the nationwide campaign.  From Melbourne to Sydney, to the Newcastle coal terminal, to Adelaide, to Port Kembla, to a 48 hour stoppage in Fremantle, “until a proper union agreement is reached”.
The Secretary of the Victorian Trades Hall Council, Luke Halikari, told the rally that the MUA-Maersk fight is a much bigger union story stretching out across all industries, a story of workers battling casualisation, precarious employment and thousands of permanent jobs contracted out to labour hire companies.
Independent working class agenda 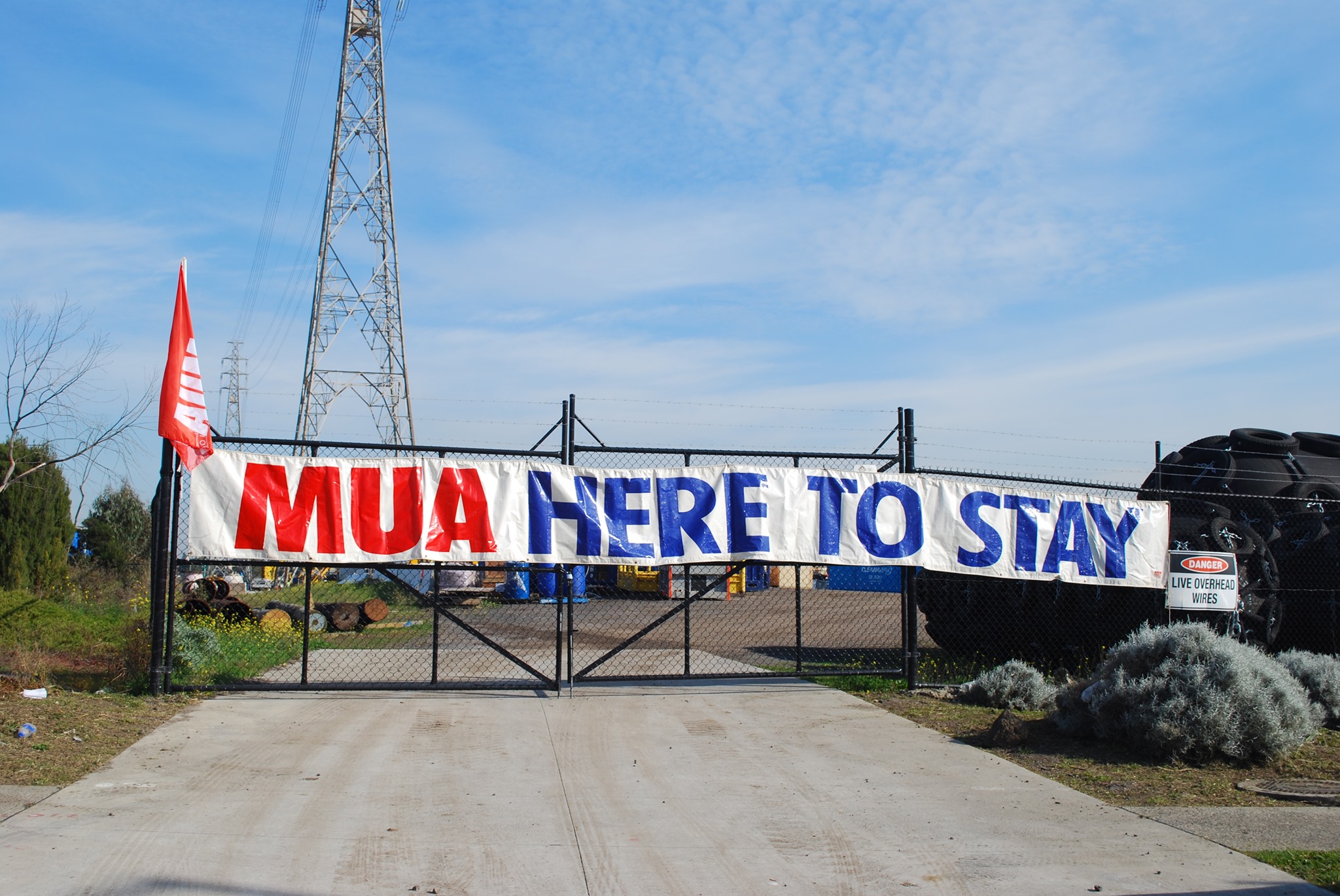 The Svitzer-Maersk attack on the MUA exposes capital and multinational corporations’ permanent agenda of relentless attacks on the rights, wages and conditions of the entire working class. Corporate attacks can only be fought by the collective power of the working class with its own independent and fighting demands - an independent working class agenda not beholden to or reliant on politicians, parliamentary parties and the courts.
The enduring legacy and tough lessons of the 1998 MUA struggle for the next generation of workers is that job security and union rights have to be fought for and can be defended on the ground by the mobilised and organised working class and its allies in the wider community.   It’s a lesson that can, and will be, repeated.