While Morrison Government Rants About China, Workers' Struggles Are On The Increase 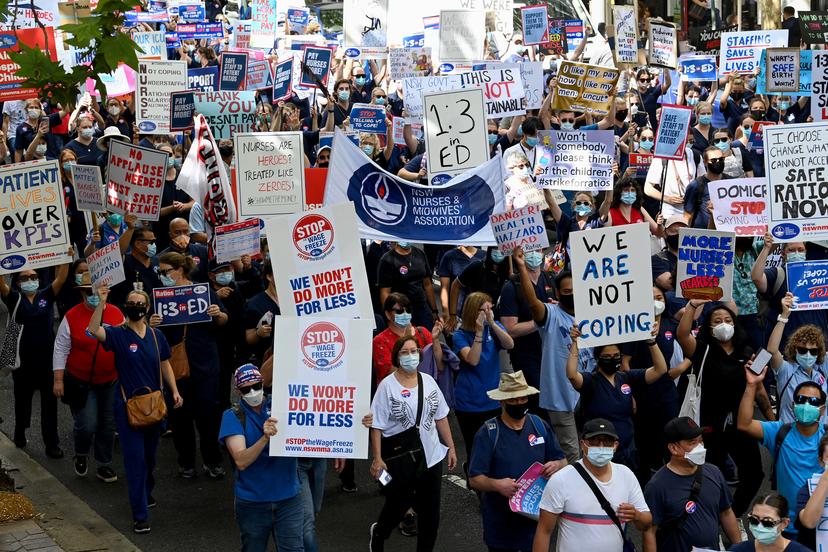 As inflation in Australia rises above the 3%, petrol prices hit $1.99 a litre and finding and/or keeping a roof over your head becomes more and more expensive, more workers are organizing to fight for wage increases just to survive.

In the middle range of wage scales, nurses in NSW recently went on strike for a pay increase and defied the bosses’ courts in doing so.

At the high end of wage scales, MUA members have been defying attempts by stevedoring multinational companies to cut workers' wages by fiddling with rosters.

Where workers are in weaker collective bargaining positions to win wage increases to keep their heads above water, turn-over of labour is high as workers move to places they hear about where there is a labour shortage and they can earn slightly more. This has led to employer association demands that international borders be relaxed so they can return to the good old pre-Covid days of having a plentiful supply of cheap migrant workers to exploit.

To make ends meet, migrant workers often work on Australian Business Number (ABNs) and get paid $10 per hour less than the Award for the industry they are in. Often their "employer" is another migrant worker in an equally precarious situation who is paid by the principal contractor to provide and pay workers needed on a particular site.

Sometimes these contracted migrant workers on ABNs pay a manager or labour hire operator an up-front amount of up to $1,000 for the "privilege" of being given a job!

However more of these workers are not putting up with this anymore and demanding the legal minimum wage at least or demanding employment directly with the business owner or at least with the principal contractor.

School cleaning and agricultural sector are renowned for this type of exploitation. However, the tide is turning as more migrant workers are speaking out and not putting up with it anymore.  In one case in school cleaning, the Catholic owned college was made aware by cleaners that the contract cleaning company at the school no longer employed most of the cleaners but had used cheap ABN labour with workers being paid just over half the Award rate. The cleaners settled with a significant wage increase.

The economic situation of any of these workers in Australia is nowhere on the Morrison Government's radar as the federal election gets nearer.

All his beat-up about national security and threat of China mean little to most workers. It is likely that for those workers eligible to vote, that they will vote against the Morrison Government because they see it as unconcerned and/or disinterested in the issues for workers that confront them in the day-to-day struggle to survive.

The same can be said for the state governments in NSW and SA.

Potential new governments at federal and state levels this year will face a working class on the move and not satisfied with "more of the same" from in-coming governments.