On International Working Women’s Day we salute our unsung heroes 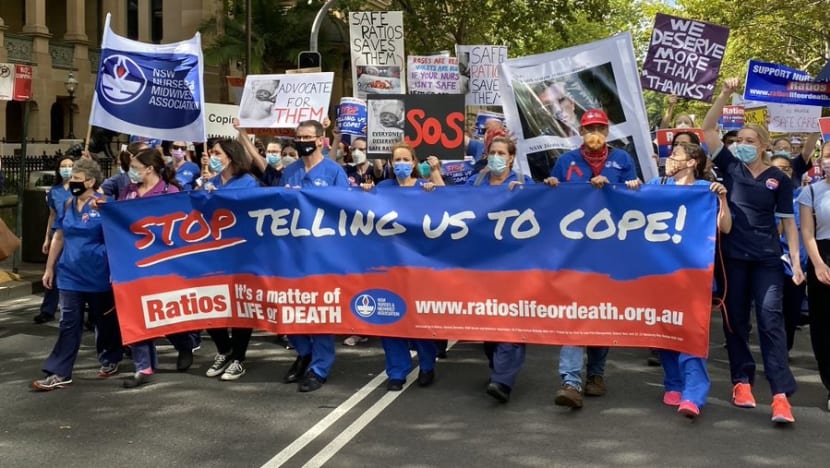 On 8th March, International Working Women’s Day, women across the world join in solidarity in the long struggle for women’s rights, equality, an end to economic and sexual exploitation, oppression and violence against women. Women demand an end to barbaric imperialist wars.  We fight for peace, justice and self-determination for all countries and peoples.

We fight for our liberation from patriarchal capitalism and imperialism and all forms of oppression enslaving women. Women carry the day to day heavy burden of capitalist economic and environmental crises and imperialist wars.

We pay tribute to women in every corner of the world, of all ages, organising and taking militant action against the injustices, inequality, oppression, climate change and wars of aggression, born of capitalism and imperialism.  We are humbled by work of many women committed to improving the lives of ordinary people in the long struggle for socialism and communism and the liberation of humanity.

In Australia, we pay tribute to the First Peoples' women whose lands were invaded and violently occupied 240 years ago by British colonialism.  The occupation, dispossession and oppression of First People continues today under US imperialist domination. We are inspired by their resilience, dignity and struggles to unite their Peoples, asserting their unceded sovereignty in the long battle for self-determination.  They persist in struggle to lift their communities out of Third World living conditions, in a country replete with wealth seized from their stolen lands by a tiny handful of corporations.

Angry women’s voices are growing in numbers, loudly asserting the rights of women to equality, equal pay, respect and justice. A life free of sexual harassment, discrimination and violence at work and at home. More voices join them demanding end to the economic exploitation and abuse of women.

Little has changed for women in the past 12 months since March 2021 when hundreds of thousands of angry women across the country spilled out into the streets demanding end to sexual harassment, abuse and violence.  Demanding equality and equal pay.  Women’s wages are still lower than men’s and equal pay has become a distant dream and our hope for future generations of women.

After more than 60 years of patiently waiting on empty government and bosses’ promises to stamp out sexual abuse, violence and discrimination, and give us equal pay, women refuse to politely wait any longer. Our wages are still lower than men’s, childcare is still unaffordable for many women, workplaces are still unsafe for many of us, sexual and domestic violence is unabated, women’s health services are underfunded, more women are homeless and living in poverty.

Women’s militancy
No longer will we be distracted and divided by the window dressing of capitalist ruling class’ fairy tale myths of “equality”, covering up the double exploitation and discrimination of working women.

We are immensely encouraged by the growing numbers of courageous young women fearlessly condemning inequality, harassment, abuse and the denigration of women.  They are growing in numbers, refusing to be cowed and belittled by male supremacy, the bosses, the patriarchal capitalist system.

We are inspired by thousands of NSW nurses fighting, uniting, striking and defying anti-workers laws, winning the battle and showing the way to all working people.   They have opened the window to a vision of independent working class struggle.

We are the majority of underpaid and overworked front line workers fighting and dealing with the deadly Covid pandemic in hospitals, homes and communities.

We are inspired by the resilience of women in workplaces and communities from different nationalities and ethnicities, uniting and fighting the bosses for decent wages, conditions and secure work.  They deeply understand from life experiences and their own relationship with the boss class, that workers have no choice but to fight the bosses’ relentless attacks on their wages and conditions, and which exploit women workers even more.

And where would capitalism be without women’s unpaid domestic work at home and in communities?  The unpaid organising, nurturing and the caring, the educating, the cleaning, keeping families, households and unpaid community services functioning, enable capitalism to exploit and extract profit from working class labour more efficiently.

This year’s International Working Women’s Day is in the midst of a world torn by open contention between the world’s greatest superpowers – US/NATO, Russia and China - competing for global control of natural resources, markets and spheres of influence.

The inter-imperialist rivalry over control of Ukraine has spiralled into a military conflict.  Ukraine is a proxy in a war between the US/NATO and Russia. The Ukrainian people are pawns on a chessboard of imperialist powers’ rivalries and war.  In imperialist wars the ordinary people suffer massive scale destruction, the hardships, displacements, homelessness, impoverishment, thousands of deaths and physical and mental injuries. Women carry the heavy burden of the direct onslaught of these brutal wars of aggression unleashed on the people by global corporations and their billionaire class.

But let’s not forget the women and children bombed and starved in northern Africa, Syria, Palestine, Philippines, Myanmar, Afghanistan and other countries, whose suffering and struggles to survive continue with little outrage or comment by politicians or media.

In Australia, we are also facing a possible military conflict between the US and China.  Australian governments are subservient to US imperialism and have aligned with the US in the economic and military contention with China. As a client state of the US, Australia has been deeply integrated into the US imperialist economic, cultural and military hegemony and preparations for war.

Women are building a broad peace movement demanding the $100s billions of people’s taxes the government is spending on the US-Australia military alliance and imperialist wars be spent instead on underfunded public health, education, child care, action on climate change, the homeless, supporting women fleeing domestic violence, eradicating discrimination and violence against women.

Working women will always fight for our rights, equality and liberation.   We join the struggle for socialism and communism, the social systems that will put an end to the exploitation and oppression of women and all humanity, and end imperialist wars.