Bert Chandler – Lifelong struggle for liberation of the people

Written by: Ted Hill on 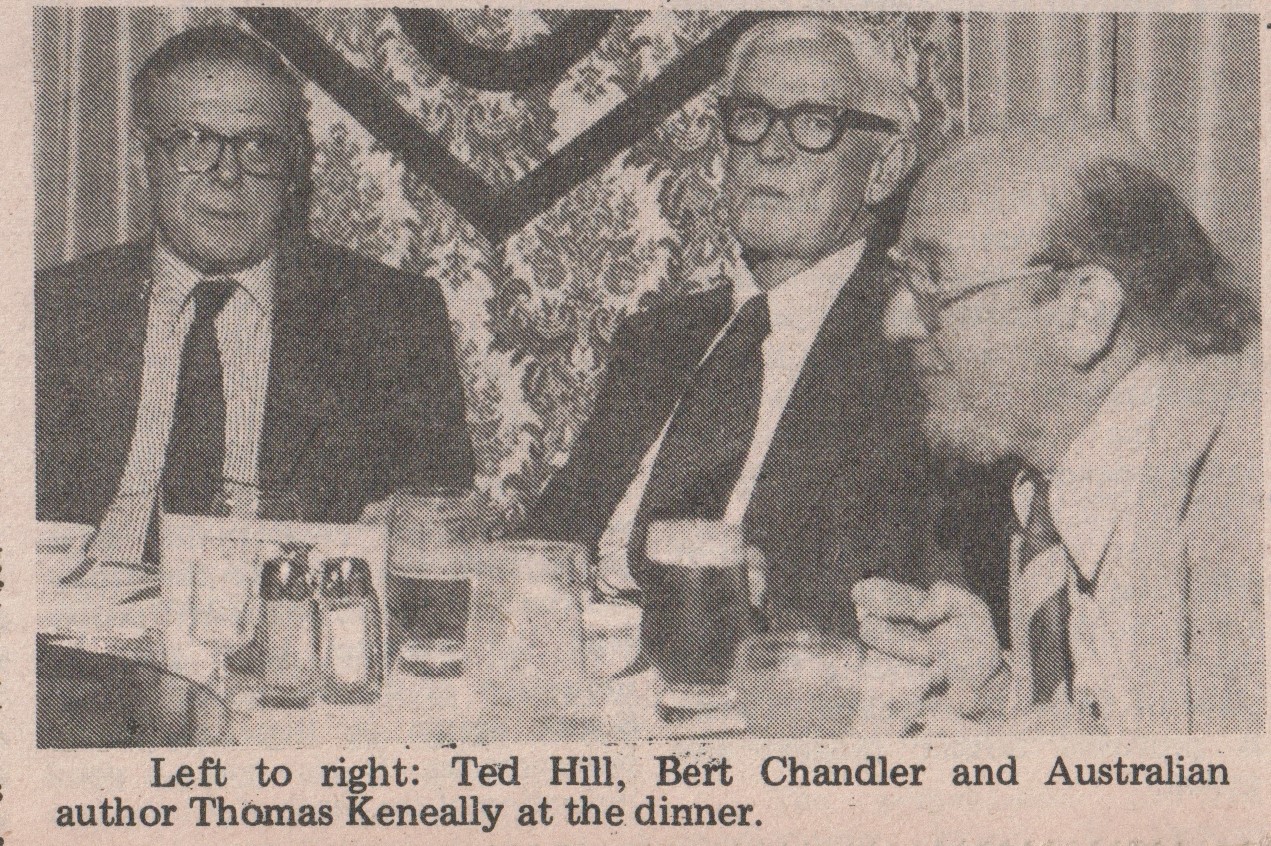 (From Vanguard November 11, 1987)
by Ted Hill, lifelong comrade and friend in many struggles

On October 30, 1987, Herbert Bovyll Chandler died in Sydney soon after he had attained the age of 83.

He had an unusually long and devoted record. Hence we mark it.

In his lifetime, Bert Chandler learned and taught and taught and learned many profoundly important progressive political lessons in service to and from the people.

It is true to say of him that from his teens, his life was devoted to the greatest of all causes – the liberation of mankind.

It is an error to elevate a particular person above that person’s fellows, but it is equally an error not to recognise that all people make history and each individual contributes to it according to that person’s ability. The individual responds to the social forces at work from time to time during his life.

Bert Chandler lived in the tumultuous 20th century – World War I, the Russian 1917 Revolution, the Great Depression, struggle against war and fascism, World War II, China’s liberation, the US aggression in Korea and Vietnam, the struggle for peace in present times. In all circumstances, he was with the people. At all times, he made his contribution to the cause of better wages and conditions for workers and other sections of the ordinary people. He participated in many, many struggles.

Over many years, he made what was perhaps a unique contribution to the printing and publication of progressive material. He was a printer by trade and made great contributions to this aspect of revolutionary work. In his political activity, he was free of the sectarianism that dogged (and dogs) some other Communists. He did not make an artificial issue of his Communism – he mixed freely with others of many different outlooks. While tolerant of differences, he handled them sympathetically.

He came to Communism through his own experiences and after a period in the ALP and then the Hughes-Evans NSW Labor Party, His freedom from sectarianism was expressed in many ways. At one stage, he was a municipal mayor, the duties of which he carried out with the respect and support of all, without his compromising political principle. He worked amicably with people of many different political persuasions. That was so of everything he did.

He was more than once the victim of political persecution. In the ‘fifties, his home was raided and vandalised by ASIO. He was framed on a trumped-up charge of sedition, (it failed); he was pilloried before the Petrov Royal Commission. Through it all, he maintained the principle of courage that belongs to those steeped in Marxism.

Personal tragedy beset him. His wife, who herself was a devoted Communist, died prematurely. Other family tragedies occurred. Yet despite great personal upsets, this man continued his work among the people.

Right up until his death, he maintained a close interest in Australian and world politics. His penetrating comments were invaluable.

His children warmly participated in and contributed to his activities. They supported him throughout, and of course, supported him in his final days of failing health.

Together they were and are a noble family.

We pay tribute to Bert Chandler as an ordinary Australian person who gave of his very best to others and derived from those others, great support and inspiration. He would have rejected undue elevation of himself and rejected denial of errors in which he participated. We learn from his long life as we learn from all people. People live socially and individually and individually and socially. It is in that sense that we record the life of Bert Chandler. It was an example with deep significance. 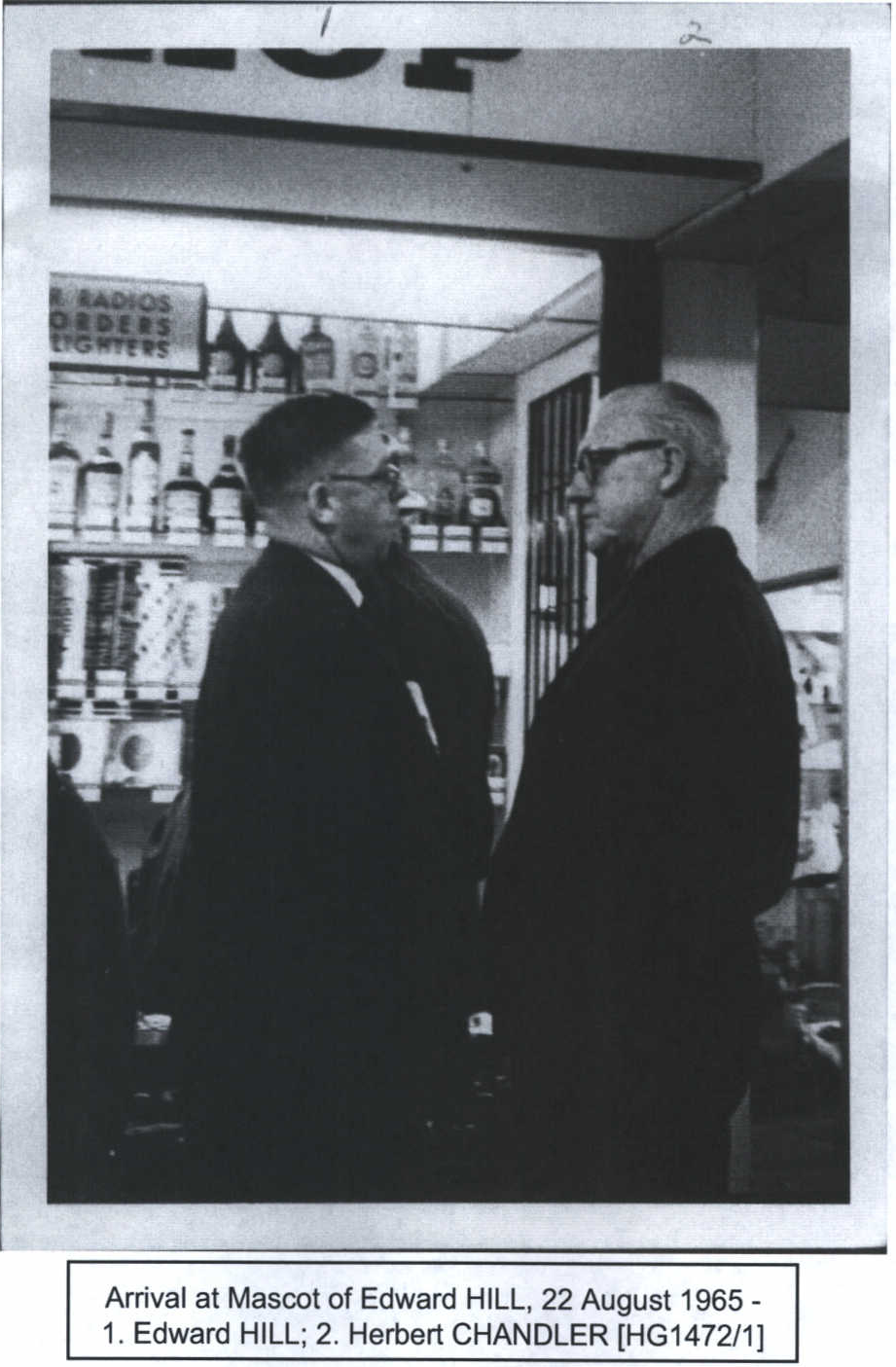 (Above: ASIO surveillance photo of Ted Hill and Bert Chandler)

In Interests of Labor.

Mr. Bert Chandler, of Lithgow who brought his wife and family to Young to spend a brief holiday with her parents, Mr. and Mrs. C. Trudgett, was interviewed by prominent members of the Young A.L.P. and requested to submit himself for selection at the State selection ballot.

Mr. Chandler was Mayor of Lithgow during 1937, and was responsible for the most progressive works in the history of that municipality. During his residence in the Young electorate he was secretary of the Young Electorate Council and President of the Hume Electorate Council. He was also campaign director for the Labor Party on several occasions, a member of the Central Executive, and delegate to all important conferences. His public activities at Lithgow included alderman of the Municipal Council, President of the Show Committee, member of the Hospital Board, active organiser for the relief of distress amongst the unemployed, President of the Horticultural Society and several other organisations calculated to advance the educational and cultural standards of the people.— 'Witness.'

Points from Mr.H. B. Chandler's Broadcast

The following points were made by Mr. H. B. Chandler, State Campaign Director of the Australian Communist Party, in a special broadcast delivered from station 2CK on Sunday night. Mr. Chandler is a member of the Central Committee and formerly occupied the position of Secretary State Labour Party.
'Are you satisfied with your, present living standards? Do you think that our Parliamentary representatives have done all that is necessary in the interest of the people — in your interests?

'I believe that the vast majority of electors are not satisfied. They know that our Parliamentary representatives have not put the interests of the people before profits. There is already much evidence of another economic depression. Prices are still rising, wages are inadequate to the needs of the average family, homes are not available to all who need them, the cost of health services, such as dental, medical and hospitalisation is usually beyond the capacity of the average wage earner.

But on the other hand the profits of the monopolists are still rising. According to figures released by the Commonwealth Bank Bulletin the total profits of 500 of Australia's biggest industrial, pastoral, trustee, insurance and finance companies was much greater in 1946 than in 1945.

'These are some facts which must be considered when deciding who we shall vote for on Saturday next. For many years now the people of New South Wales have been voting either for a Liberal Party (under another name) or the Labor Party. When they become dissatisfied with one they have turned it out for the other. But conditions have not changed much. It is true the Labor Party had been much better than the Liberals, but they have not done enough to advance the interests of the people.

'But the position is different to-day. There is an alternate to both the Liberal Party and the Labor Party. You can vote for a working class party that is not influenced by monopoly capitalists. In the Cessnock electorate you can vote for a better representative of the working class, by voting for the Communist candidate. Ald. Charles Evans.. . . .You can vote for the Communist Party— the Party you know has always stood for the people and against those who put the profit of the few before the lives of the many.

'Recently I heard a very prominent official of the Labor Party make this comment. “Remember,” he said, “Our Party the Labor Party— is now a centre Party”.'
'The Communist Party rejects the false view that higher wages make increased prices necessary and will fight for real wage increases and still more rigid price control as the best means to increase the purchasing power of  the people, and to lessen the effect of the oncoming depression The reason there is so much opposition to increased wages and to reduced prices of necessary goods by price control is that the profits of the capitalists will be reduced.

'According to figures compiled, an increase of £1 in the basic wage would cost the capitalists £76,000,000 a year and on their 1945-46 figures they would still collect £417 millions in profits. By this it will be seen that wages can be increased without increasing prices.

‘Before I conclude I want to ask another question.

'Are you done of those people who say, “But It does not matter who we elect. They are all the same. They are only concerned about the big salary they get.”?
'In some cases that may be true. But not all. For instance what about the Communists? If Charlie Evans is elected, and 1 believe he will be, he will give portion of his parliamentary salary to the trade union movement to help the struggle for a better standard of living. Fred Patterson, Communist member of Parliament in Queensland, was the only one to vote against an increase in salary for members of Parliament, and after that increase was carried, he donated it to the Brisbane Trades and Labor Council to help the fight against capitalists and for the improved working and living conditions.

'Yes, the Communist Party Is different from other parties. Its aim is to end injustice, poverty, insecurity, depressions and war. As a step forward, we say elect a Communist for Cessnock. Send Ald. Charles Evans to Parliament to fight for nationalisation of mines and monopolies; increased wages and less hours of toil, pegged prices— so as the housewives can make the wages provide for the family; for health and hospitalisation; homes with really free education for all; better modern amenities and an all-round improvement on the working and living amenities for the people of the mining areas. — (Authorised by Bert Wilkinson, Campaign Director).

Attempt to show Queen an enemy of her people

SYDNEY, Wed. — An article in the June issue of the Communist Review was intended to show that the Queen was an enemy of her people, Mr. J. W. Shandy Q.C., said in the Special Federal Court today.

It was also designed to show that the Queen would use what means she could to oppress her people, he said. One paragraph in the article, if believed by the reader, could do nothing except bring the Sovereign into hatred and contempt.

Mr. Shand is appearing for the Crown, which has charged three men with sedition. The charges arose out of an article entitled “The 'Democratic' Monarch”, in the June issue of the Communist Review.

The three men are: Herbert Bovyll Chandler, publisher and printer, of Bannockburn St., Pymble; charged with printing and publishing the article ; Adam Ogston, publisher, of Fontainbleu St., Sans Souci; charged with publishing the article; and James Norman Bone, manager of the Newsletter Printery, Ross St., Forest Lodge, charged with printing, the article. Mr. Meagher agreed to an application by Mr. L. C. Badham, Q.C. (for Chandler), and Mr. F. Paterson (for Ogston); that he reserve his decision on Ogston's- case— being heard first — until he had heard the charges against Chandler and Bone.

'The monarchy is a useful weapon to protect the system, to stifle class-consciousness, foster class-collaboration, and paralyse working-class action for social change'.

Mr. F. Paterson (for Ogston) said the onus of proving a charge of sedition against Adam Ogston was on the Prosecution.

Mr. Paterson submitted that the Magistrate could not be satisfied beyond all reasonable doubt, that the article brought the Sovereign into hatred or contempt.

The most that could be said about the article was that it was a political criticism or political commentary. Adjourned to tomorrow.