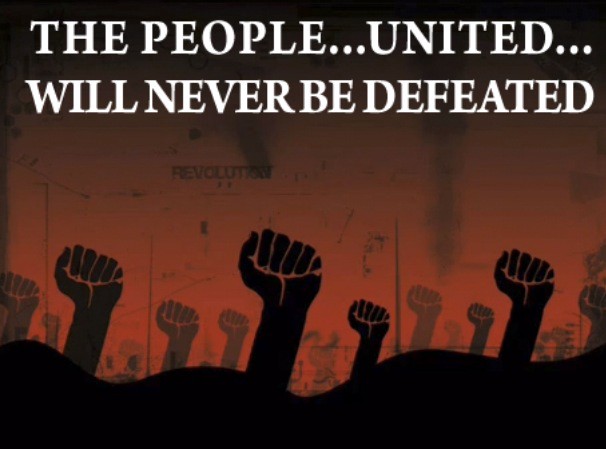 Ongoing capitalist economic crises are being driven hard by superpower rivalries and war.

The capitalist house of cards is poised for a new crash. One commentator has joked the only thing stopping the financial and commercial system collapsing is that the termites in its beams are holding hands.

That is also driving imperialist powers to war in a self-reinforcing two-legged dynamic of struggles to snatch territories from each other where their capitalists can expand the regions of their investments, production, markets and accumulation of profits.

In the wash-up of the 2008 credit implosion, the US Federal Reserve pumped money into US corporations through buying their government bonds. They spent over $8 trillion dollars.

It left US capitalists sitting on great stashes of dollars, capital they couldn't find lucrative places for. It saw them roll huge sums into stockmarket and new real estate speculation.  With Trump’s tax cuts in 2017, their rush into stocks saw the Dow Jones Index of the New York Stock-exchange jump over 25,000. It’s now at 34,000.

Capitalists have pumped up share prices as governments considered safe have pulled back from issuing bonds. That effectively means they have slowed down on borrowing trillions and issuing IOUs payable at a nominated time a few years down the track at a fixed rate of return. Safe government bonds are normally a safe refuge but even lousy basket case governments have been finding they could issue bonds and find swags of money prepared to take looney risks.

In 2017 Argentina offered to sell nearly $18 billion of bonds to mature in 2117, a hundred years away. The offer was oversubscribed 2 days after opening. Argentina had defaulted on international debts in 2014. It was the 6th time it had defaulted in the last 100 years. By August 2018 Argentina sought an IMF bailout seeking $59 billion.  The international capitalist system is awash with credit, with production capacity way in excess of any capacity of markets to take the products.

The system is choking on its own excess, the accumulation of money-capital, of productive capital, of credit and debt in quantities never seen before.
To resolve the problems involves what bankers gently call ‘rebalancing’. That quaint expression actually means destruction on a grand scale.

Destruction represented by scenes of empty decaying suburbs in the US, imploding residential towers in China, ‘rustbelts’ in many countries, closure of car factories in Australia, and much more in all corners of the globe are just an entree to the answer key international banks and institutions identify. Destruction of astounding amounts of value in the system is their recipe for recovery.

But that is just one leg of the bi-pedal capitalist crunch. Superpower rivalry is driven by that crisis of capitalist ability to find lucrative places for investment, markets for excess products, new territories for profit and expanded accumulation of capital.

That rivalry and war in Ukraine sees two camps emerging more clearly defined, a western imperialist bloc under US domination and a China-Russian bloc.
The western imperialist bloc sees the US overwhelmingly dominant with the UK in close alliance while the Johnson and the Conservative Party is in government. UK Labor has a less cosy relationship with the US. It has tended to lean towards European powers. Germany and France.

France has taken a more openly independent position from the US for many years including calls for recognition of Russian security concerns over relentless expansion of NATO, with US influence, eastwards towards Russia’s borders.

Each side is driven to impose its burdens on people within its empire, particularly aimed at their non-homelands and the working class. We have already seen it with the closure of the car industry in response to the glut of vehicle manufacturing capacity across the globe in the middle of the last decade. US and Japanese car companies walked out, destroying the last of Australian vehicle manufacturing capacity, as part of a wide-ranging destruction of value encompassed in plant and equipment world-wide by massive corporations as investors fled their share registers and credit dried up.

The capitalist debt crisis rumbles on despite huge credits being thrown at banks and other corporates by governments over the past decade. When it will collapse is yet to be seen but a reckoning is on the way.

The US Federal Reserve and Australia’s Reserve Bank have flagged imminent moves to stop creating credit.

At its April 2022 meeting the Reserve Bank of Australia kept its cash rate unchanged at 0.1%, as it has for the last 2 ½ years. But it flagged it will be raising that rate soon. The money market has priced future bond prices at rates that say they expect the hike to be in May.

It will be the first time it has raised the rate since 2010.

The last meeting of the US Federal Reserve Bank Management Committee showed they are looking at starting to tighten credit in May by upping interest rates by hikes up of 0.5% at a time.

Banks will raise interest rates on mortgages and business loans here and in the US. Its already affecting emerging economies.

People’s debt costs will rise, house prices have started to drop, squeezing the ratio of the outstanding debt to the house being the security on the loan.  Inflation has hit the prices of daily necessities. The rich corporates are already shoving the cost of their crisis onto working people. Imperialist powers push the problems onto countries they hold under their economic, financial, political and strategic domination. Australia is right in US cross-hairs.

With Hardships, People Rebel against them

The coming period will see rapid intensification of people’s hardships. Nothing will change with that even if the government changes at the Federal election. What will happen is that remnants of people’s belief that things can be changed with changes of government, will be getting dashed even more deeply than they have been.

Workers’ industrial struggle is already more widespread than we have seen in years. That tendency can only grow as the financial aspect of the crisis hits home and finds reflection in slowdowns in production, tightening of government funding, and destruction of values across industries and commodities.

People are cynical about governments, parliaments or the two major parties as refuges that can help them through crises. The trend towards non-party independents is one expression of the decline in belief that governments change anything much to people’s benefit. Cynicism has great strength.

The situation has turned in favour of rebellion against corporate power. It calls for bold actions to support and develop people’s struggle to make the rich corporates pay for their economic and political crises.  People are taking action. That is the first and key thing right now. Getting experience in action against people’s hardships is the first thing. The working class has moved to take action across a wide front. Workers are creating organisation and politics against the crises.

At this stage the action is directed against the symptoms. Help to identify the disease of capitalist power and the system of wages exploitation is key among those on the move. It’s needed to avoid the dead-end of compromise and concessions keeping capitalist power oppressing working and other working people.

Support and spread the wave of industrial action and organisation of working people.

Alert and organise among workers for workers’ power to target corporate power and the wages system of exploitation.

Be bold. Rely on the workers and other working people to stand up for their struggle to make the rich corporates pay, against hardships being imposed on the people and their leaders in struggle.