Oppose the Taliban’s war on women!

Written by: Communist (Maoist) Party of Afghanistan on 19 May 2022 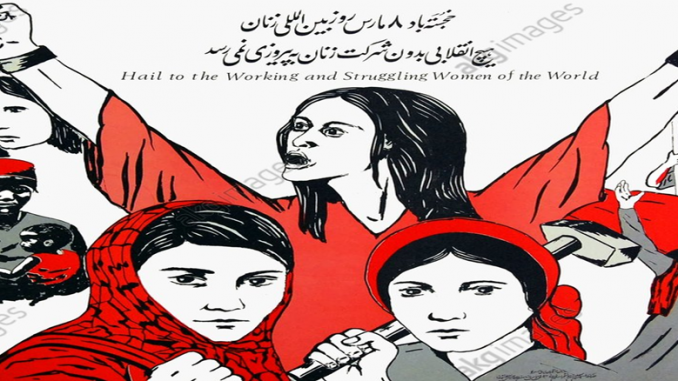 The following statement on the Taliban’s misogynistic repression of Afghan women was recently released by the Communist (Maoist) Party of Afghanistan. It followed the Taliban’s reactionary decree on enforcing the wearing of the hijab.  Down with patriarchy everywhere!

Organize, Resist, and Fightback against the Taliban's war on Women.

The Taliban has stepped up its efforts to establish a gender apartheid regime, re-enacting the unnerving misogynist policies that earned them infamy in the 1990s. The vile Taliban Ministry of Vice and Virtue, which is callously yet meaningfully and deliberately housed in the compound of the now-defunct Ministry of Women's Affairs, has ordered all women in the country to hide their faces in public and even avoid going out of their houses altogether, as "the best option to observe sharia hijab."

On May 7, the notorious ministry, in a male-only event, announced a decree aimed at the total erasure of women from public life. The order states that "women, who are not very young or very old must cover their faces." The decree identifies the burqa, which covers women's head-to-toe and only allows the eyes to see through a small grille, "as the best form of hijab."

The Taliban announced, "obeying the decree obligatory" and, in a sinister scheme, obliges women's male "guardians" or employers to enforce the order, denying women's humanity and agency. The decree warns that women who do not obey the order will have their houses identified, and their male "guardians" first warned and later punished and imprisoned. Moreover, women working in public service and government institutions who don't comply will be fired. The decree announces to suspend government male employees if their female relatives fail to comply.

This new draconian misogynist decree is the latest in a series of attacks on women's rights since the Taliban returned to power in August last year. They ordered women to stay home in their second week in power because their fighters weren't trained to respect them. Later, in September, they banned education for girls beyond grade six. In December, they banned women from traveling without a male chaperone. Now, the new decree requiring all women to cover their faces will compound’s oppression and rob them of their personal and social identities and deny them the basic right to choose their clothes. These misogynist policies are further intensifying Afghanistan's social and economic crisis. When 98 percent of the country's population is starving, the Taliban put the country's female population under house arrest and deny them the very right to earn a living.

The very essence of the Taliban's ideology and politics put them in enmity with the masses in the country. Their regime lacks any modicum of legitimacy. In the Taliban's reactionary ideology, which claims to be ruling on behalf of God, there is no value given to the masses' consent. Their only method of governance is to use coercion and brute force.

The Taliban's Islamic Emirate is a textbook example of a weak and illegitimate political regime with a thin social base. It is no wonder the question that their rule will not last long is the topic of discussion everywhere. No doubt the Taliban's plague will fade away and collapse. However, the real question is, will the country's people be able to determine their own political destiny? Because if they fail to form their own popular, revolutionary leadership and take charge of their social and political future, the collapse of the Taliban regime could bring about new social and political disasters. For more than forty years, the people of the country are suffering by the barbarism that imperialists, social-imperialists, and reactionary Islamists are brewing for them. This barbarism will stay and could intensify if it is not met with the organized response of the masses of people. The people of Afghanistan will continue to suffer in the wretched hell of imperialism, reactionary Islamism, and ethnonationalism, or they will organize and become the masters of their destiny and move towards a progressive new democratic and socialist future.

As we have witnessed repeatedly, there is no end to the Taliban's irrational animosity towards women. Yet, women of Afghanistan have bravely stood up and continue to oppose the Taliban's anti-human policies with tenacity and determination in the face of severe repression and violence, which is a source of courage and hope for a better future. Therefore, communist, and revolutionary forces must organize against the Taliban's war against women. Communist and revolutionary forces must enhance their organizing, agitation, and propaganda among women masses towards shattering the Taliban's gender apartheid regime.

Our struggle in Afghanistan is part of the global struggle of the toiling masses for a better future. Therefore, we are calling on all democratic, progressive, workers, and communist forces worldwide to stand in solidarity with the people’s, especially women's struggle in Afghanistan, and support the fight against the normalization of the Taliban regime.

Communist (Maoist) Party of Afghanistan condemns the Taliban's insane misogyny and war against women. We are determined to struggle and organize until the Taliban regime is buried in the people's anger and overthrown patriarchy, semi-feudalism, bureaucratic capitalism, and imperialism, making the people the master of their destiny.

Down with the patriarchy!
Down with Taliban's misogynist theocracy!
Long live the new democratic and socialist revolution!
Long live Marxism-Leninism-Maoism!

Communist (Maoist) Party of Afghanistan
10 May 2022