Downer gets a cold shoulder from angry workers 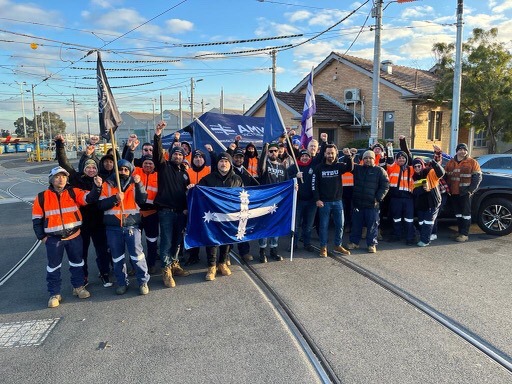 Workers represented by the AMWU, ETU and RTBU at Downer Rail's East Preston Tram Refurbishment project downed tools as a part of protected industrial action beginning on Tuesday the 19th of July this week, Melbourne's coldest morning of the winter.

There was a near unanimous endorsement of this course of action amongst the workforce (Only 3 scabs have attempted to work on) after Downer came to the table with yet another insulting enterprise bargaining offer of less than 2 percent a year for the life of the rest of the project, with workers handing back their free travel card in return! With the project expected to last around another twelve months, it's easy to see how insulting a 2 percent offer is in the midst of Australia experiencing some of it's worst inflation conditions in living memory.

Another piece of strong motivation for the workforce was the discovery that workers employed just around the corner at the old Preston Workshops by Yarra Trams, doing essentially the same refurbishment work, are on much better wages and conditions. This would be an absurd scenario in any case, but considering that Yarra Trams is a 50/50 partnership between Downer and French operator Keolis, Downer are paying two groups of workers, literally a kilometre away from each other different rates for doing the same work!

The fact that a web of companies can be set up like this by multinationals to rip off all the people of our state through rorting of public transport contracts is repeated in our Metropolitan train system, with Metro being a similar conglomerate of MTR, a Hong Kong rail giant, Chinese construction giant John Holland and local company UGL Rail. Privatisation has allowed these multinationals to not just rip off the state in general, but as seen here, the hard working employees that keep our network rolling directly.

Downer's East Preston workforce have decided they are worth every bit as much as their counterparts down the road and are determined to keep up their picket for as long as it takes to get pay and conditions parity. They are led on the job by a committed group of delegates from all three unions involved with a great mix of experience and youth. The picket is located on an incredibly busy thoroughfare and community support has been fantastic. All are welcome to show their support to the workers in person on the picket at 211-243 Plenty Road, Preston! Please follow the AMWU Victoria facebook page for updates!