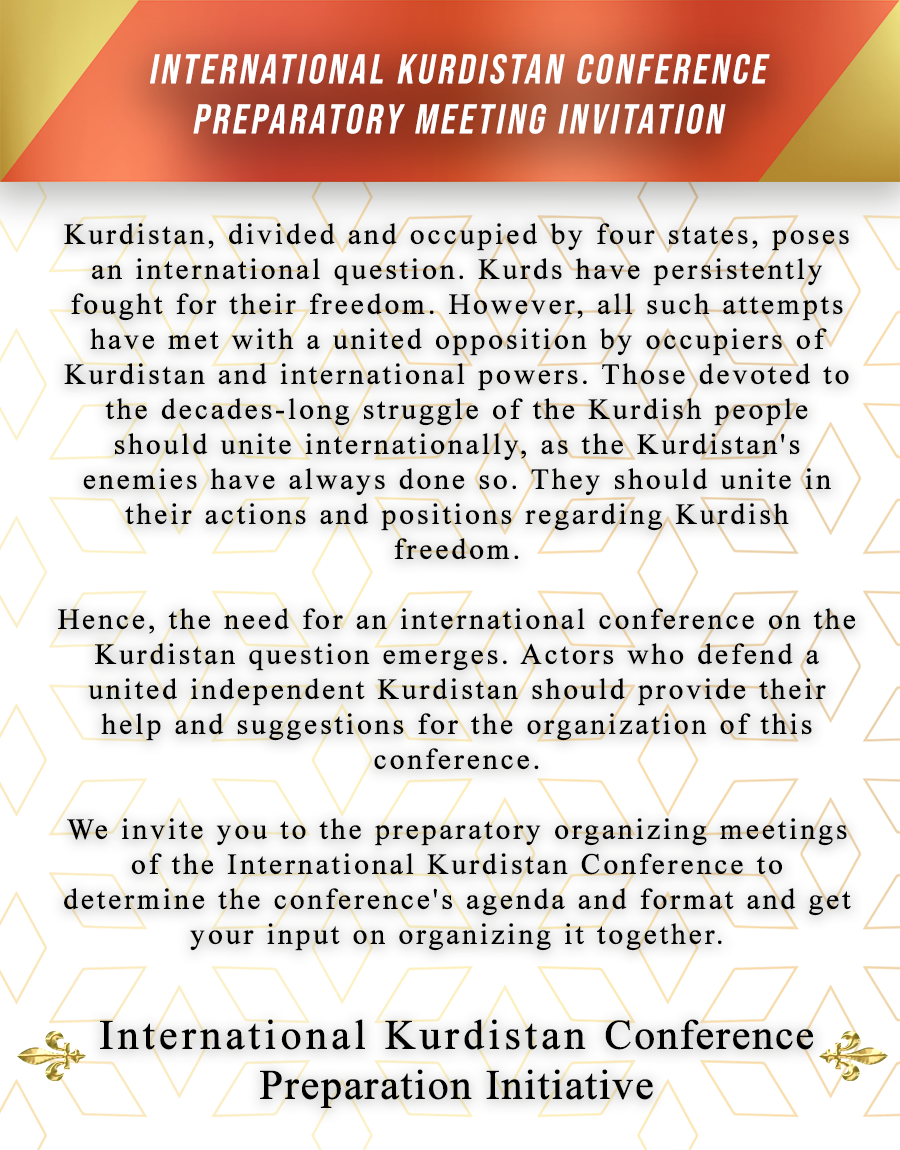 Our Party has always supported the Kurdish people's struggle for national self-determination and a state of their own. How that is achieved is a matter for the Kurdish people. We are not familiar enough with their complex situation to do anything but offer general in-principle support. We recommend this notice of an international conference on Kurdistan to all our readers, but particularly to the Kurdish people living in Australia.Those people can get into touch with the conference organisers here: International Kurdistan Conference <intkurdistanconference@gmail.com> .

Declaration of the International Kurdistan Conference Initiative
1. Whenever the ones without sovereignty try to rise against the arbitrary massacres of the ruling states, ruling states accuse them of being corrupt bandits, traitors, or terrorists. This might summarize the hundreds of years of history of the Kurdish, who are currently occupied by four states in their homeland. Recent developments in all parts of Kurdistan in the last few months have illustrated this centuries-old story.
2. Ten years ago, an airstrike killed Kurdish villagers who were trading on their territory in Roboski, and today mortars rained on the children of Zaxo. Back then, the Turkish state claimed terrorists were amongst trader villagers to justify the bombing. Today they say, “terrorists killed the civilians, not us.” These remarks clarify that the Turkish state considers killing Kurds legitimate as they cannot be subsided to recognize the Turkish state. Turkey is not the only state ignoring the sovereignty of the Kurdistan Regional Government by dropping bombs on Bashur. On March 13th, Iranian missiles hit Hawler. Even though the pretext of the attack was to prevent Israel’s terrorist activities, the essential objective was to intimidate the regional government in Bashur. These recent political and military events show that the territory of the Kurds has become a hunting ground for the oppressing nation-states to settle their diplomatic and military accounts.
3. Likewise, the most reckless operation of the last decade has been conducted in Bakur over the previous three months. Aside from the delusional statements of victory over Kurds, the way the Turkish state wages the war exposes its feebleness. The Turkish state avoids sending the drafted privates to the war. Instead, it relies on unmanned robots, not even its contracted military personnel. The defeat in Vietnam War forced the USA to adopt such combat techniques. And history tells us that the second-class imitation of the US will only be successful as the United States was in Iraq, Afghanistan, and Pakistan. On the other hand, the Turkish state is not capable of waging war by relying entirely on technological opportunities on its own. Therefore, the war in Bakur continues with the approval of the governments of Iran and Iraq to some extent. These attacks are also not independent of the intentions of the United States and Russia in the region.
4. Afrin, the westernmost branch of Rojava, has been under the occupation of the Turkish state for a long time. The approval of Russia and the US is a decisive factor in the invasion rather than the Turkish army’s military capability. Now the Turkish government, seeing the Ukrainian war as an opportunity, is trying to get permission for an operation to the east of the River Euphrates. The Turkish government indeed wants to use this operation as a tool to advance domestic political plans. It cares more about its pandemonium than the operation itself. Moreover, no state has given its permission for the operation so far. Yet the Afrin example has shown that the occupying states or their bearers will not defend the Kurdish. The current political developments show that attempts to plot against the Kurds with the support of Iran and Russia will gain momentum with the effort to revive the Astana “Peace” process.
5. Iran, whose president said “Bijî Kurdistan” in Sanandaj, was the number one force that invaded Kirkuk after the 2017 referendum and marched towards Hawler. And today, the Kurdish massacres in Rojhelat are continuing with executions. Last June alone, 12 Kurds were executed by the Iranian government.
6. The attacks carried out cooperatively and sometimes competitively by different states in different parts of Kurdistan prove the despair of the oppressing nation-states, not the Kurds they enchain. While all four regional Kurdish states are experiencing or expecting major political crises, the desire for independence is growing in every part of Kurdistan while the different Kurdish movements’ diplomatic, political and military opportunities are increasing. Under these political conditions, occupying regimes cannot capture the Kurds using traditional ways. These regimes, which have assumed an utterly repressive character due to their domestic predicaments or drawn to civil wars, want to use the Kurds as a crutch or antagonize them to solve their domestic crises. However, at the end of each attempt, they attack the Kurds more aggressively.
7. The present political condition stipulates that the Kurds should unite with a national claim aimed at the unity and independence of the four parts of Kurdistan. The current condition also highlights the importance of waging a struggle against the occupation of Turkey, Iraq, Syria, and Iran. Breaking the occupying aggressors’ tenacity of war will raise Kurdistan’s struggle for independence and pave the way for victory.
8. Taking a stand against those who forbid sovereignty to Kurdistan is also an indispensable condition for the struggle for democracy in Turkey, Iran, Syria, and Iraq. These regimes use attacks and campaigns against the Kurdish to fortify their repressive structures. In this regard, the Kurds may gain their independence on their own, but the struggle for democratic Iran, Iraq, Syria, and Turkey is impossible by remaining indifferent to the independence of Kurdistan and the occupation of their own state.
9. The International Kurdistan Conference Preparation Initiative is taking a stance on this political climate. Its call is for those who see that the independence of Kurdistan is an indispensable condition for the emancipation of not only the Kurds but also the oppressed of the Middle East and the whole world.