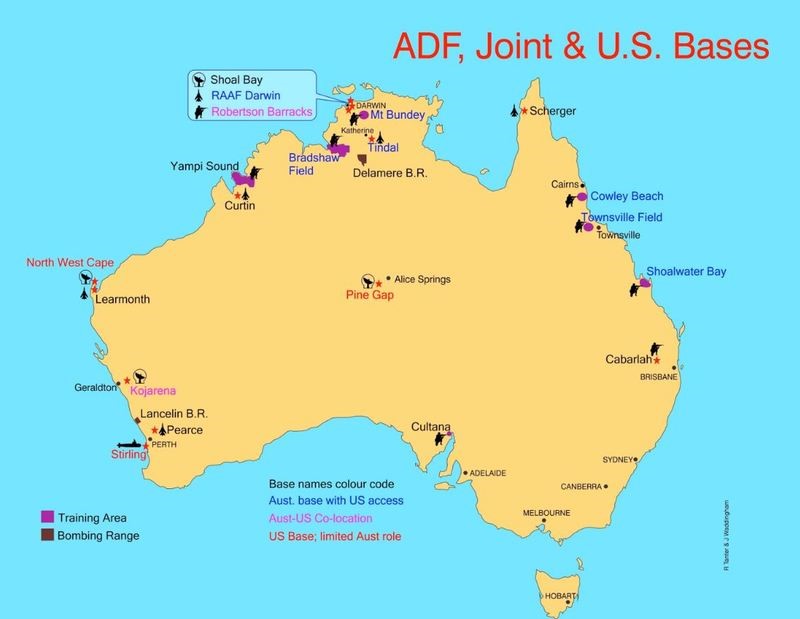 Moves by the UK to re-establish a diplomatic post in Perth have coincided with calls by the West Australian government to increase defence and security provision with Canberra. WA, facing the Indian Ocean, has long been assessed as strategically important and having special naval and security considerations.

he moves have also coincided with increased British pressure in the Indo-Pacific region which has far-reaching implications for Australia: issues re-emerging from the previous Cold War, the forthcoming defence review, an important inter-government meeting in mid-August, and domestic spying and surveillance can also be included on the set agendas.

An announcement that the UK were re-opening their diplomatic mission in Perth with a Consul-General has followed similar moves in the Indo-Pacific region as the British Commonwealth seeks to extend its influence. The gargantuan bureaucracy has long been associated with MI6 and British political connivance and chicanery. The moves, nevertheless, were couched in formal diplomatic protocol by Amanda Milling, the visiting UK Minister for Asia and the Middle East, along lines of increasing trade and investment in the region and to 'strengthen our diplomatic footprint'. (1) She included reference to 'our shared focus on economic security … as well as our support for the large number of Brits in WA'. (2) No doubt the new UK consular facilities in Perth will be making use of their 'intelligence assets' in any manner in which they see fit.

The British Comonwealth has a long history in the wider region and across the world: composed of 56 member countries, many of which are regarded as highly strategic, the centralised organisation has long been associated with lavish displays of patronage and benevolence together with assimilation of disparate figures to add to their immense power and influence behind the scenes of seemingly open political and diplomatic dialogue. The roots of their vast intelligence networks have been shown to be very long indeed. (3)

In the past three years the UK have doubled their number of High Commissions in the Pacific region to six, basing their influence now in Fiji, PNG, the Solomon Islands, Tonga, Samoa and Vanuatu. (4) The fact Australia is regarded as a Mother Country to Pacific Islanders, has thrust greater responsibilities upon Canberra and provincial capital cities.

Underpinning the announcement, British High Commissioner to Australia, Vicky Treadell, stated the new post in Perth 'recognises the importance of WA to the UK'. (5) WA, facing the Indian Ocean, is a prominent part of Australia's military and security provision with a large coast-line and hosting a significant part of the national economy. In fact, moves by the Whitlam government in the mid-1970s to openly support the Indian Ocean as a 'zone of peace', ran counter to joint US/UK regional defence and security provision centred upon Diego Garcia and Pine Gap and may well have proved the decisive reason why the dismissal took place in November, 1975. (6) Immediately after the dismissal an official CIA briefing in the National Intelligence Bulletin noted the incoming Fraser government had 'underscored the importance of Australia's ties with traditional allies … and … Fraser's first initiative … was … to strengthen the US connection back to the US/UK base project for Diego Garcia Island … the Whitlam government had strongly opposed the project and had supported an Indian Ocean 'zone of peace', appealing to the world navies to stay out of the area. (7)

Later, toward the end of the previous Cold War a statement issued by Australian Brigadier Ted Serong, likewise, concerned fears about the defence of WA and the need to involve other countries with similar Indian Ocean borders, including South Africa, then in the beginning of dismantling its repressive racialistic Apartheid system. He recognised an ALP government 'would not align with South Africa, but a Liberal one could', leaving little to the imagination about political expedience and Australia's own sordid past with its Whites Only Immigration policies. (8)

With the new Cold War, many of the previous issues are now re-emerging.

During mid-August, for example, an inter-governmental meeting has been scheduled for WA Defence Industries Minister Paul Papalia, and his federal counterpart, Defence Minister Richard Marles, in Canberra. (9) The stated agenda is a relic of the previous Cold War. Fears have apparently arisen over 'some of the nation's most vulnerable industries … being … chronically under-defended'. (10) When Papalia stated 'if the purpose of the Australian Defence Force (ADF) is defending Australia, then WA needs far more capability and activity', it struck an important factor under-lying Australia's subservient relationship with the US. (11)

It was noted the Pilbara region of WA 'is home to massive iron ore mines and liquefied natural gas plants', which have been left largely undefended. (12) It was noted, furthermore, that WA generates forty per cent of Australia's national revenue.

From the earliest days of the previous Cold War to the present day, Australia has been in a subservient military relationship with the US: the so-called 'alliance' was also primarily designed for 'US interests', not those of Australia. As a result of slavish adherence to the 'alliance', Australia has been drawn into many US-led military adventures on the Korean Peninsula, Vietnam, Iraq, Afghanistan and others, together with Canberra being expected to host US military personnel and their facilities, including Pine Gap.

The forthcoming defence review, planned by the Albanese government in Canberra and conducted by former ADF chief Angus Houston and former ALP defence minister Stephen Smith, will also be addressing some of the outstanding problems in the context of a changing regional balance of forces and the present Cold War.

While the mid-August inter-governmental meeting will be considering re-locating maritime surveillance aircraft at present stationed in South Australia to WA, and possibly re-opening the dormant Learmouth base near Exmouth in WA's north-west coast, Australia's 'alliance' with the US will not be openly discussed for obvious reasons. It would raise discussion points which the US has no wish to publicise. The whole matter of the AUKUS alliance and maritime issues has, for example, fused the navies of the UK and US with Australian counterparts to operate together in the sensitive South China Seas. (13) Australia, due to its geo-strategic location has been designated the role of a forward base for future operations together with similar bases in the ROK and Japan. It carries responsibilities.

References included in the agenda of the forthcoming inter-governmental meeting about WA being close to main approaches to Australia from the Indonesian archipelago have to be evaluated in that light. The fact that Indonesia has very strong trade and diplomatic links with China has proved problematic for Canberra: recent studies of the Indonesian telecommunications system, regarded as vital for joint military operations with Australian signals, have shown Chinese companies have trained 'tens of thousands of Indonesian tech workers, government officials and students every year'. (14) Huawei, the Chinese telecommunications company banned from operating in the Australian 5G system, furthermore, has a long-time plan to train at least 100,000 Indonesian workers over the next five years. (15) Such facts raise serious doubts in the minds of those conducting intelligence assessments in Canberra.

The irony that contemporary South Africa now has a progressive, centralised government in Pretoria with strong trade and diplomatic links with China and the Russian Federation will also raise defence and security considerations for WA and, therefore, is also likely to be an agenda item in the meeting.

It has been strongly speculated both the UK and US are seeking to open further military facilities across the Indo-Pacific region, adding to their already huge collection: the former has 145 based in 45 countries while the latter has over eight hundred globally. (16) WA, was, and remains, a prime geo-strategic location for planning real-war scenarios as it faces the area in question.

Other agenda items for the forthcoming defence review and the inter-government meeting, will also include the assessment of 'threats within' and continued political stability, reminiscent of the previous Cold War. (17) They are unlikely to be openly discussed although they will include wholesale domestic spying and surveillance of those considered a threat and obstacle to successive waves of US-led militarism sweeping the Indo-Pacific region. No doubt members of the trade-union movement employed in the extractive industries and their counterparts in strategic infra-structure in WA, likewise, will have already been identified by workplace spies providing the information for faceless wonders in the corridors of power to be assessed in line with so-called Homeland Security vetting procedures.