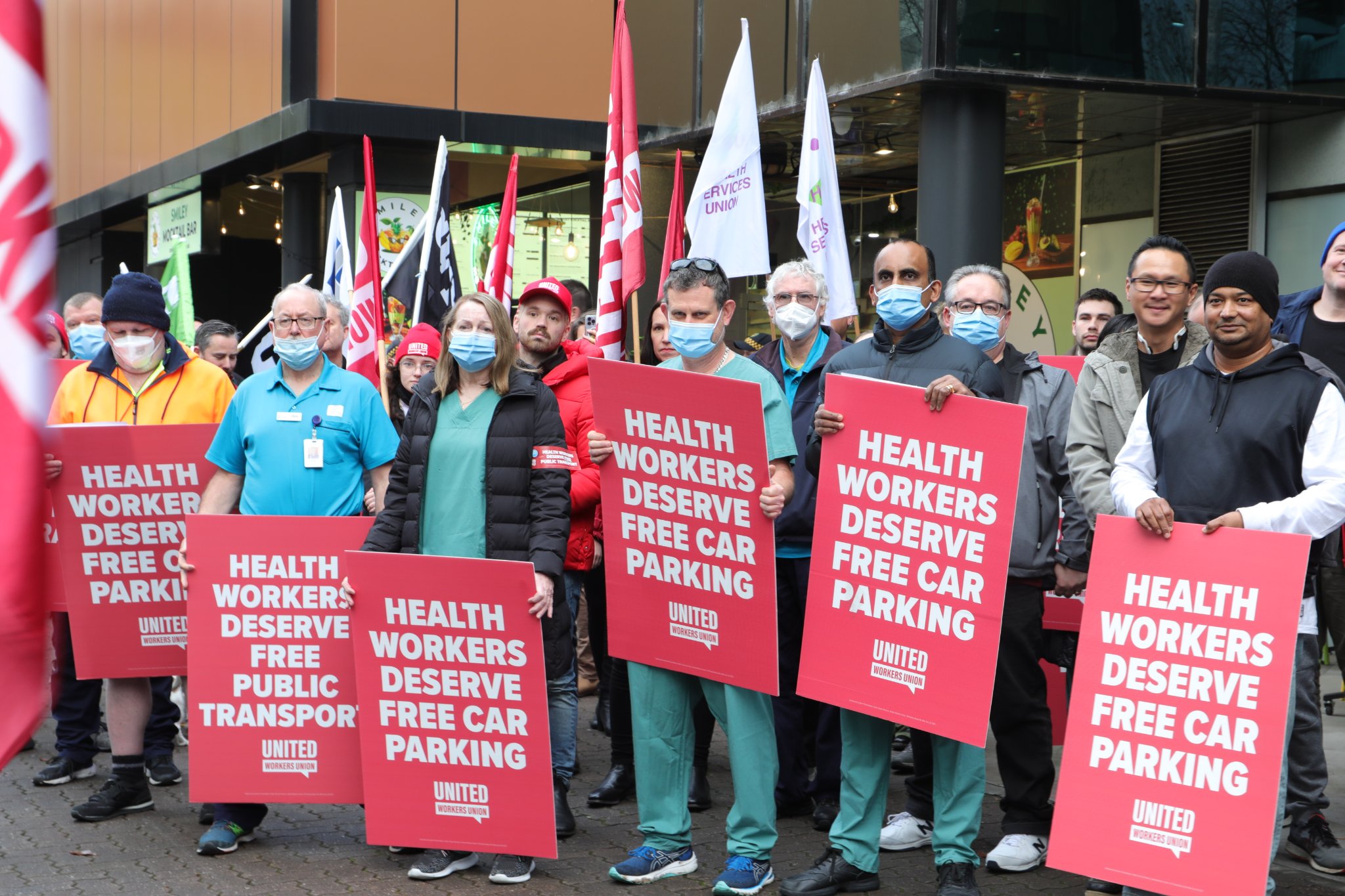 Hundreds of workers assembled at the main entrance to the building with placards and plenty of voice, demanding that the recently elected ALP SA Government reverse their decision to re-introduce user pays car parking for weekly paid hospital workers.

Background To The Demonstration:

When Covid-19 hit over two years ago, the then Liberal SA Government and its health department bureaucrats announced that car parking for hospital workers would be free during the Covid-19 pandemic.

Due to an inadequate public transport system and shift work, most public hospital workers drive to and from work. They have to use the car parks at the hospitals as most of the surrounding streets have time limits on them for parking and metres that charge more than the hospital car parks!

So, prior to the free parking due to Covid-19, hospital workers would pay an average of $1300 a year on car parking.

The Liberal Government decision to introduce free car parking was in recognition of what a vital role ALL hospital workers, including cleaners, food services, orderlies, security, play in the efficient and safe operation of the public hospitals. It was also an attempt to minimize absenteeism and lift morale of what even a Liberal Government could not avoid calling "essential workers"!

In March 2022 the Malinauskas-led ALP Government came to power with most blue collar hospital workers voting for them. These workers accepted a modest pay increase in a new Enterprise Agreement, realizing that the whole public health system was struggling. They accepted a new Agreement with modest wage increases even though inflation was rising at a rapid rate.

Then, a couple of months later, the Premier Malinauskas and his Health Minister Chris Picton announce that the free car parking will end!

This made hospital workers extremely angry. They rightly felt let down by a new government who they thought was "for the workers". In early August the United Workers Union supported by other health sector Unions planned a strike and demonstration outside the Health Minister's office.

The SA Government was surprised by the number of workers who turned up and their determination which was shown by workers standing right in front of the building entrance and ignoring repeated calls from the Police Security to move away.

The demonstration received widespread media attention. As the demonstration started the SA Government Deputy Premier was on the radio saying that the Government would not be moved. The Government thought it had made a concession by agreeing to address the parking issue at least for nurses during their on-going enterprise bargaining negotiations.

However, the lower paid hospital workers saw this as more evidence that the Government was out of touch with lower paid hospital workers regarding cost of living rises. Also, these workers' next enterprise bargaining negotiations were not until 2025!
The demonstration ended with workers even more determined to continue their fight over this car parking issue which at the end of the day was a cost of living issue and about a lack of respect for their work in the hospital system.

The Right To Strike

One of the demands on the federal Labor Government from the ACTU and affiliated unions is that "all workers must have the right to strike" at any time without any need for a secret ballot. This is a demand that should be supported and worth fighting for.

It is the ruling class's and federal government's worst nightmare to have workers in the private sector walking off the job without notice, not just during a bargaining period of an enterprise agreement, but at any time.

A big test for federal Labor will be "whose side are they on" when it comes to changing actual industrial laws currently enshrined in the Fair Work Act and other laws that prevent one group of workers from supporting others by not crossing a picket line.