The Governor-General and the hurly-burly of political corruption 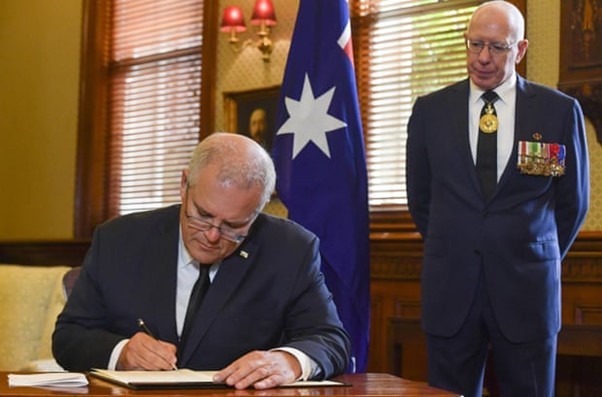 When the disclosures of former Prime Minister Scott Morrison’s secret gathering of multiple ministries unto himself were revealed, some people were quick to rush to the defence of Governor-General David Hurley, saying that he was an innocent party, that he was simply under an obligation to act on the advice of the Prime Minister.

The revelations about Morrison, and the tumult associated with them, are because the democratic and constitutional fig leaf covering the naked dictatorship of the bourgeoisie has been brought into question, and nothing is more important to the bourgeoisie than its capacity to keep those it exploits and oppresses comfortable in their delusions about the freedoms and rights that they enjoy through democracy and the Constitution.

However, he said he would not criticise Hurley, and legal experts say a constitutional crisis could have been triggered had Hurley refused Morrison’s request.

So, why the reticence to call Hurley to account?

Former SA Senator Rex Patrick was quite certain that he should be held accountable.

“The Governor-General was in effect complicit to a conspiracy to defraud the parliament, of which he is the ultimate, of which he is sovereign,” he said.
A few independent journalists and commentators have questioned aspects of Hurley’s track record in ways that the mainstream media have avoided.

For example, both Michael West Media and the Kangaroo Court of Australia (KCA) website have questioned Hurley’s role in an $18m federal government grant to a charity, the Governor-General’s Australian Future Leader’s Foundation. They alleged that Hurley lobbied Morrison to provide the grant to the charity which has no office, website or staff, apart from three directors, and has been inactive in the first 16 months of its existence. The grant was supplied despite no tender process having been used.

The KCA website describes the grant as a fraud: “It is nothing more than a fraud scam that has illegally stolen money from the government.”

Generous grants that have gone through no competitive tender process are nothing new for the Morrison government.

Back in 2019, a tiny spurious security company, Paladin, which was registered to a beach shack on Kangaroo Island, was awarded a $423m contract through a “limited tenure” process in which it was the only company invited to tender, to provide housing for refugee detainees and security on Manus Island concentration camp. Home Affairs Minister Peter Dutton was clearly embarrassed by the scandal and said he had “no sight” of the tender process.

As Treasurer, Morrison approved a $444m grant to the Foundation.  There was no competitive tender process.  The Foundation had not even applied for the grant! As we revealed at the time, the Foundation was a front for finance capitalists and fossil fuel corporations who wanted to minimise climate change activism by pushing the “science” of reef resilience. It remains the largest ever federal government grant to an NGO.

Leaving aside the crony capitalism of untendered grants to bodgy recipients, the Governor-General has his own corrupt practices that occurred whilst he was Chief of the Defence Forces.

Remember the sex Skype scandal when an 18-year old female cadet was filmed, without her knowledge, having sex? It was also live streamed via Skype onto a computer into a nearby room where there were 6 other cadets watching. They also took pictures and showed them to other cadets. The cadet was told by Defence, wrongly, that what happened would be illegal in any of the Australian states but it was not illegal under ACT law so virtually nothing would happen.

This was done on Hurley’s watch.

Remember whistleblower and army officer David McBride’s attempts to have allegations of Australian war crimes in Afghanistan dealt with by the Army? These war crimes, later substantiated by the Brereton Report, occurred while Hurley was Chief of the Defence Forces. McBride went to the media with his allegations after his attempts to lodge complaints with the Defence Forces were denied. As a result, he still faces life imprisonment for violating national security.

He has called on the Federal Police to visit Defence Headquarters and ask for all major documents Hurley signed in his tenure, to see whether any of them seem to be attempts to hide the truth or cover for dubious political requests.

“Hurley didn’t start signing dubious but, highly important, documents just while he was Gov Gen,” tweeted McBride on August 22. “He was given the GG job because he was well known to be a ‘signer’. He signed off on many a dubious order: ‘not’ to investigate BRS (Ben Roberts-Smith – eds) allegations, but also to investigate scapegoats.”

“The same evidence that is used now to prosecute me, will support of prosecution of Hurley: in fact that is precisely my defence: Hurley was covering up war crimes (and many other things) -and the org. was complicit.”

It is no longer tenable to Hurley as an innocent in the “multiple ministries” affair.

Plausible allegations suggest that he has been corrupt on a number of levels. Even such a minor indiscretion as appearing with his wife in an ad for a Canberra building company that completed renovations on their private home suggest his lack of judgement and openness to “favour for mates” deals that compromise his office.

Australian workers have a justifiable cynicism directed at politicians, but they are still encouraged to believe that system itself is fair and equitable, and that it will look after them in the long run.

We beg to differ. Even the most open and incorruptible bourgeois democracy enforces the rights of the owners of the major means of production and the financial corporations that grease the wheels of exploitation.

The right to vote and stand for election is promoted as the ultimate expression of democracy, but beyond that, the people have no say in how society operates.

Only by fighting for and winning anti-imperialist independence and socialism will the superficialities of our system be swept aside and real democracy emerge as workers make themselves the ruling class over society.