Jobs Summit Initiatives Will Be Second Fiddle to Workers’ Struggle 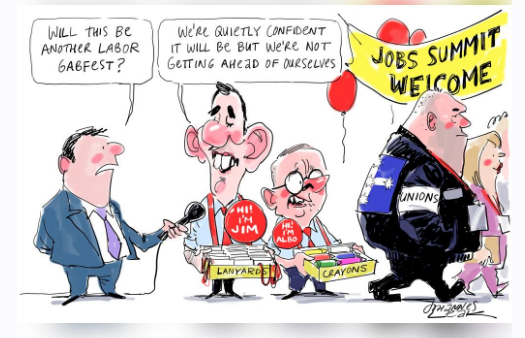 (Above: This cartoon from Murdoch’s Australian reflects people’s cynicism about the Jobs Summit whilst perpetuating ruling class stereotypes about unions.)

The Albanese Government's Jobs Summit has been and gone. On Friday 2 September at the completion of the Summit, Albanese put out a press release on his view of the Summit outcomes.

It said the Government wanted to "maintain this spirit of cooperation and collaboration in the months and years ahead" and wanted to build a "bigger, better-trained and more productive workforce" and a "stronger economy and a stronger Australia" based on "full employment, productivity growth and equal opportunities for women".

The press release then outlined a summary of "36 Immediate Initiatives" including: