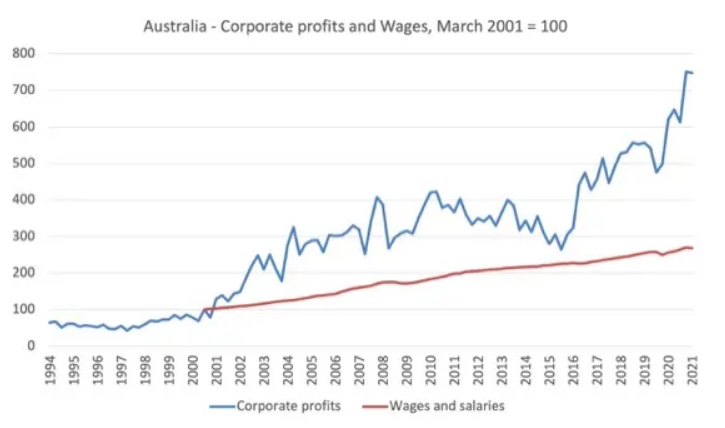 Workers are increasingly finding it hard to make ends meet. The paltry rises in wages they receive do not compensate for the rising cost of living.  In reality workers are working more for less.

At the same time profits as a percentage of GNP has never been higher and continue to grow at a fast rate.

According to ABS date the share of national income going to corporate profits has grown from 18% in the early 1960s to 32 % now. This trend towards a greater share of the national economy going to profits has accelerated in recent years while wage increases have virtually remained stagnant or even declined in real terms.

If it wasn’t for the labour power supplied by workers there would be no economic growth and thus no profits. Yet workers’ share of the wealth their labour generates is minimal compared to the wealth amassed by their employers.

This is a defining feature of today’s capitalism which workers are chained to. In this system they have only their labour power to sell so that they can live and provide for themselves and their families.

This imbalance between wages and profits is a feature of the capitalist economic system and is responsible for the widening of the gap between rich and poor.

Productivity is measured by how much output a worker can achieve for each hour of work. Over the past three years productivity has increased 1.5% annually while inflation in that period has risen on average by 2.1%.

For wages to have kept up with the cost of living they should have risen by at least 3.6% over the past three years yet they have averaged only a 2% growth. The fact is that employers are paying less for labour that is more productive.

How are employers getting away with this? One reason is the influence capitalists have on governments. Through intense lobbying they have been able to get the kind of industrial relations laws that put profits ahead of people.

This has resulted in unions having to struggle for better wages and conditions for all workers in an industrial legal setting which clearly favours the employer.

The business sector’s reaction to the recent decision of the Fair Work Commission to grant workers on the minimum wage an increase of 5.2% shows how little they care for the welfare of workers.

The increase which brought the hourly rate up to $21.38 was in response to the rise in inflation and will result in those on the minimum wage taking home only $812.60 per week. This wouldn’t cover the private school education costs of many capitalists.

Yet according to the business sector the rise in the minimum wage will have a devastating effect on the economy. According to the capitalists it will result in higher inflation and many small businesses will go to the wall as a result.

The mass media shows its support for this view by only occasionally interviewing striking workers. Instead, they frequently interview café owners who claim that the increase in the minimum wage may well result in them having to lay off workers.

What the mass media doesn’t make known is that many small businesses will benefit from the lowest paid workers having more disposable income. The public would get a clearer picture of what the wage rise means if representatives of these small business owners are interviewed.

The public would get an even clearer picture still if capitalists were interviewed as to the effect of this wage growth on their profit margin.

This fear mongering about higher wages leading to higher rates of inflation is simply not true. The 5.2% increase represents only a partial catch up of the rising cost of living which has already happened.

So, while profits are growing and wages falling behind the rate of inflation it would seem that businesses are actually profiting from inflation and are keeping the gains from higher productivity to themselves.

It is a good time for capitalists in Australia at present but many workers are finding it increasingly difficult to live on what they earn.

In the recent past inflation has been low. However, this is fast changing. Now inflation is over 5% and is expected to rise further in the next year. This is bad news for those struggling on their current level of income. If wages go up more slowly than prices working people will be even worse off.

This rise in inflation is not caused by wage growth, but the increase in profits by big business. Wages can only lead to higher levels of inflation if they grow more than inflation and productivity combined. Wages can grow by 7% in the next year before they would have any effect on inflation.

This is because inflation is a measure of prices rises that have already occurred. Consequently, wages growth has fallen well behind the rise in prices over the past year. An increase in wages of 7% in the coming year will only cover the rise in the cost of living which has already occurred.

Nurses, teachers and other workers in the public sector find they are struggling to make ends meet and are expected to work under deteriorating working conditions.

Their volume of work has increased. As a result many are suffering from burnout and are leaving their professions which can only result in the situation becoming worse.

Australia’s energy, retail, transport, grocery and banking businesses are among the most profitable in the world. Increased government spending to cover real wage increases for workers in the public sector could be paid for from the profits businesses in these sectors are making.

Some multinationals operating in Australia like Google and Facebook who pay virtually no tax could be levied on the profits they make in Australia.
Businesses in the resource sector could be told to pay a windfall profits tax. The super profit tax on the banking sector could be raised.

The current boom in the mining sector requires fewer workers due to the introduction of much a greater use of automation. Businesses in this sector of the economy can now maintain their increased level of production with fewer workers.

The increased level of profits enjoyed by this sector could easily bear the imposition of a windfall tax. The result being that part of the increased profits would flow through to the rest of the economy rather than to local and off shore shareholders

Such measures could be taken to raise government spending to fund wage increases for those working in essential services like education and health.

Need for Changes in Industrial Relations:

For workers to get a fairer share of the wealth they create through their labour there would have to be a major restructure of the industrial relations system. Changes which would put employer and employee on a more equal footing. Everything now favours the bosses. That’s got to change.