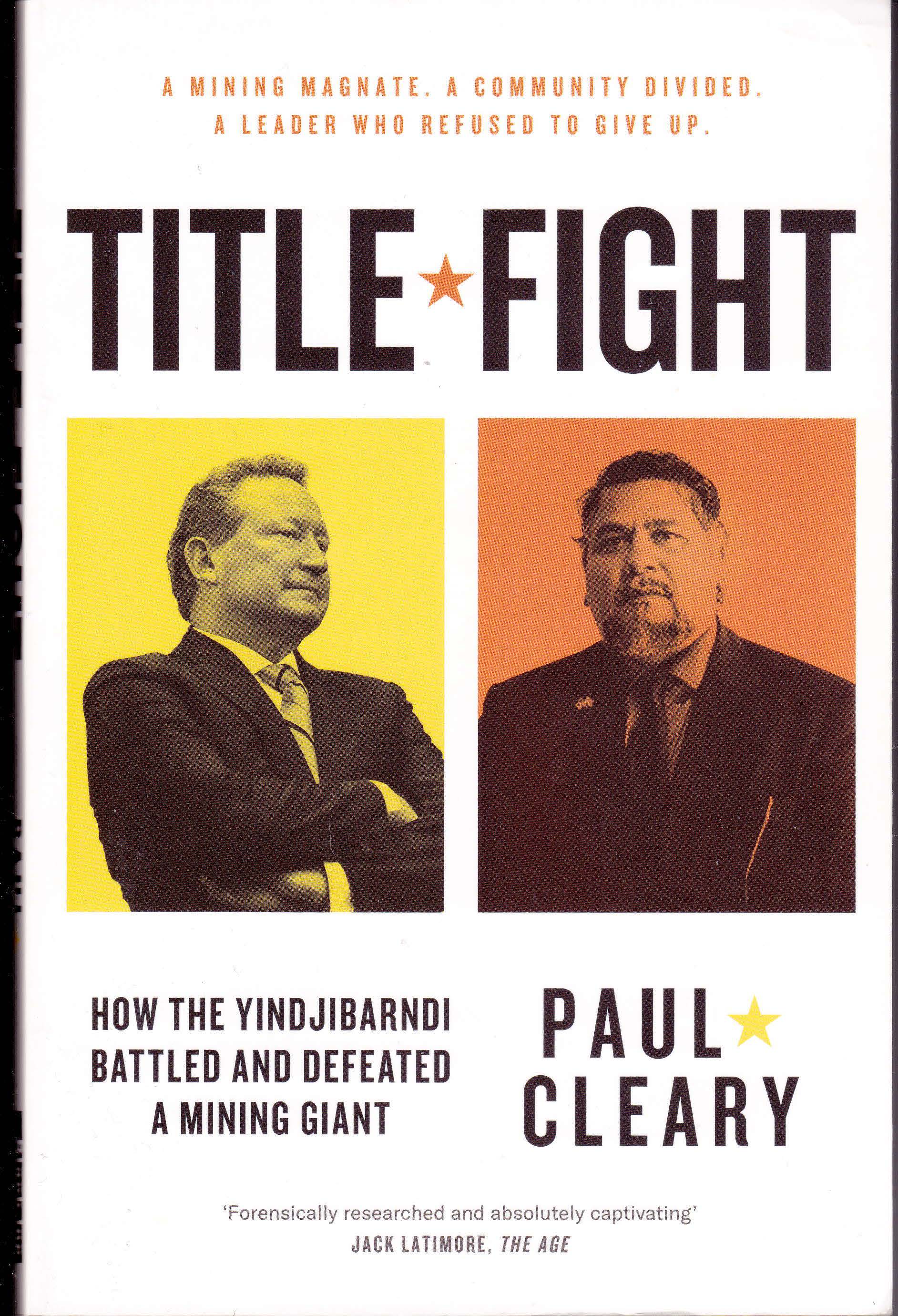 Andrew “Twiggy” Forrest is well-known to Australians as a self-made mining billionaire, philanthropist, environmentalist and friend of Indigenous people, or so his PR machine works overtime to convince us. The Yindjibarndi people of Western Australia’s Pilbara region have seen a different side of Forrest and his company Fortescue Metals Group. (FMG)

Andrew Forrest is Australia’s richest man with a personal fortune estimated at around $30 billion. (He is the second richest person in Australia after Gina Rinehart on $34 billion.)  Forrest has a 36% share in FMG which gives him a handy slice of the company’s $8-10 billion annual profit.  FMG is the fourth-largest iron ore producer in the world with assets of around $50 billion and holdings of over 87,000 sq. km in the Pilbara region. Some of the iron ore mines that have generated Forrest’s billions are on the land of the Yindjibarndi people.

TITLE FIGHT How The Yindjibarndi Battled and Defeated A Mining Giant by Paul Cleary tells the story of how the Yindjibarndi fought and won a thirteen-year battle against Andrew Forrest, FMG and their billions of dollars.

From 2008, FMG has tried to get unlimited access to Yindjibarndi land while offering minimal compensation. The Yindjibarndi resisted FMG’s attempts to take over their land and sought to gain title rights allowing them exclusive possession of their land.

FMG used dirty tactics to oppose the Yindjibarndi. They tried to dispute the Yindjibarndi’s connection to their land and downplay the significance of the findings of archaeological surveys of sites on Yindjibarndi land. FMG sacked consultants who produced a report detailing a large number of sites which would have hindered FMG’s aims. FMG commissioned another report from another, more obedient, firm of consultants who produced a report more to FMG’s liking.

FMG subjected the YAC to multiple legal actions in a number of different courts, spending hundreds of thousands of dollars on high-powered lawyers against the poorly-resourced YAC.

FMG encouraged a breakaway group of Yindjibarndi people who were sympathetic to FMG. They were showered with millions of dollars in payments and backed and were financed in numerous court challenges to the YAC, in the hope of being declared the legal representatives of the Yindjibarndi. Unfortunately, playing off one group of Indigenous people against another is a tactic that is being used to advantage by other mining companies.

The Yindjibarndi, led by Michael Woodley never gave up the struggle, until in 2017 the Federal Court of Australia granted them the right of exclusive possession over their land. It was not until 2020 that the High Court threw out FMG’s attempt to have the Federal Court’s decision overturned.

In another example of a victory by Indigenous people over a mining company, the Federal Court has just ordered Santos to stop drilling at its $6.3 billion gas project in the ocean about 120 km north of the Tiwi Islands, which lie 80 km north of Darwin.

The Court found that the National Offshore Petroleum Safety and Environmental Management Authority (NOPSEMA) had approved Santos’ environmental plan without checking whether the company had carried out adequate consultation with all relevant parties, as required by law. The Tiwi Islanders claim that they were not properly consulted before NOPSEMA approved the plan.

Is not uncommon for the various regulatory bodies involved in dealing with the mining industry to look after the interests of mining companies rather than protecting the interests of Indigenous people and the environment.

Australia’s Indigenous people are showing us that victory is possible in struggle against multinational companies, using a variety of tactics, not just relying on the courts. TITLE FIGHT  is a must-read for everybody involved in the struggle for Australian Independence.