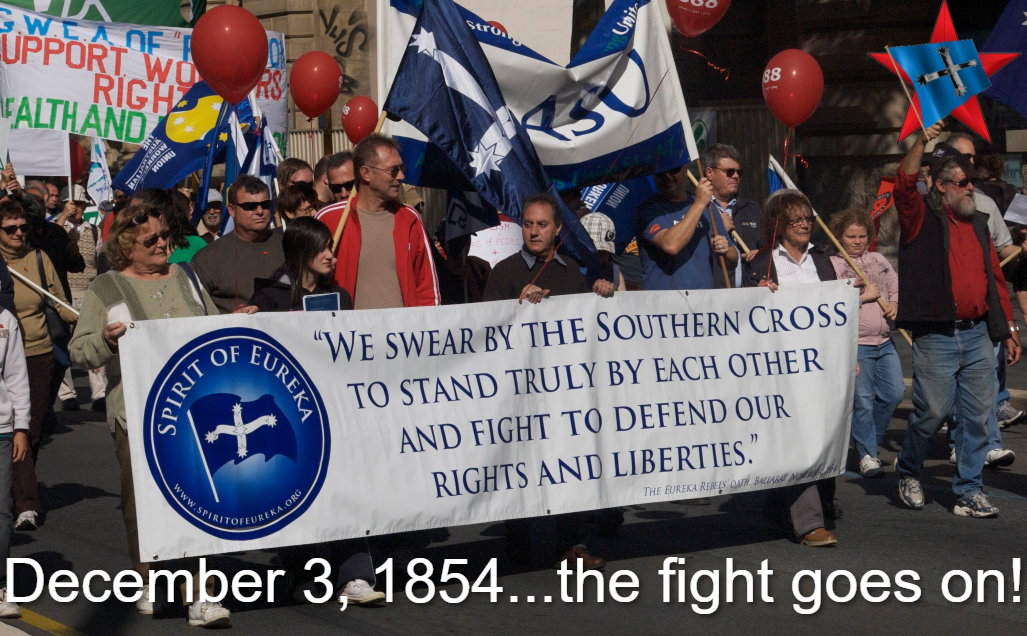 3 December is celebrated as the anniversary day of the Eureka Stockade of 1854.

The miners involved in that struggle in 1854 were mainly independent miners but their struggle against an oppressive British colonial power in Victoria at the time had support of working people throughout the colony.

Raeffaello Carboni, a migrant from Italy and one of the leaders of the miners struggle against colonial oppression, summed up the significance of Eureka when he said, “Irrespective of nationality, religion, and colour to salute the Southern Cross (Eureka) flag as the refuge of all oppressed people from all countries on earth.”

In the following decades, the Eureka flag became a symbol of workers’ struggles including at the formation of the Australian Federation of Labor in 1889 where an English poet, Francis Adams recited a poem about the Eureka Flag as "The sign of our faith and the fight we fight, the Stars of the Southern Cross!”

Since that time many union members in many struggles have raised the Eureka Flag as their flag of struggle.

Implicit in his statement was inclusion of First Nations People. In Carboni’s “The Eureka Stockade”, he has passing references to the Tarrang, a clan group of the Dja Dja Wurrung. He lived for some time with them and tried to learn their language. He said he found them “very humane”. He also wrote a play, “Gilburnia”. It was written after the Rebellion to inform his Italian readers of the effects of colonialism on Australian Aborigines. The play was published in the 1870s, has been translated into English, and has been used by Dja Dja Wurrung storytellers and by academics to identify relevant cultural elements in his story.

Nevertheless, it was a failing of the Rebellion that there was no unity between the majority of the miners and the First Peoples, nor with the Chinese who had waged a far more violent and sustained fight against the same British colonialists in the First Opium War of 1839-42.

Today it is First Nations people and migrant workers who, like in 1854, are the most oppressed, in this time by modern day colonialism we call imperialism.

A reflection of this struggle is the Secure Jobs, Better Pay Bill that was passed through federal parliament on the eve of 3 December 2022, the anniversary of Eureka Stockade.

The Secure Jobs Better Pay Bill is of course by no means as significant as the Eureka Stockade for the “oppressed peoples of all countries on earth”.

However, it does provide more opportunity for oppressed peoples to unite across workplaces and across whole industries and thereby enable them to experience collective action on a bigger scale.

Through these broader industrial struggles, oppressed peoples will also see the limitations of the Secure Jobs Better Pay amendments to the industrial laws that constrain workers, leading in turn to new demands and new forms of struggle.

This is one element of the relevance of Eureka on workers struggle today.