China update: The working class must lead the movement! 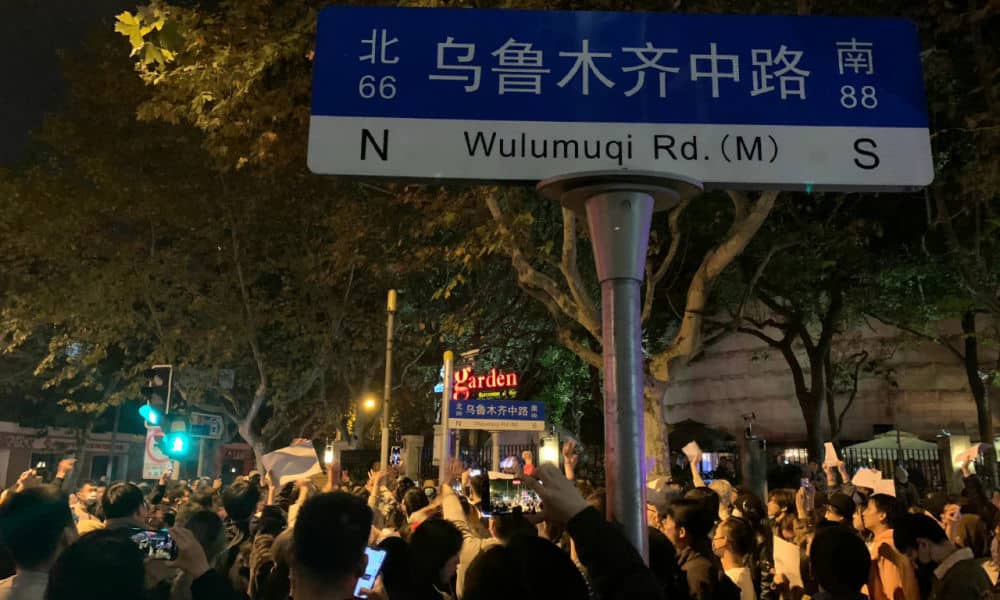 (This is the latest update, written on December 1, by our Chinese friends. We have added several explanatory notes - Eds.)

December 1. The movement continues to take a turn for the worse and the solidarity movement in Urumqi is now, so to speak, completely cut off from the reality of the rest of the Chinese people. It has become a movement of the liberals. We have to break with them and demand that the original aims of the movement and the needs of the socialist revolutionary line come to the side of the interests of the masses and not those of the liberals.

The Chinese government has begun preparations to organise a silent commemoration of the death of Jiang Zemin, and some liberals in the country have immediately taken advantage of the opportunity to join the commemoration. On this issue there are two factions within the liberal community, those who support this and those who do not. Although Jiang Zemin is by definition their historical enemy, this conflict over whether to commemorate him or not did not split them internally, showing the unprincipled and opportunistic nature of their entire faction.

And what about our liberals abroad? For example, the Solidarity with Urumqi Middle Road event (1)  now developing in Japan. In addition to our Hong Kong-independence, Tibetan-independence and Xinjiang-independence forces on the scene, our liberals and their Japanese friends have also put up more banners to split China, such as Zhuxia independence (2) , the disintegration of China and the Great Shu Republic (3) . This proves that our judgement of November 30 was completely correct. The liberals are inextricably linked to international imperialism and their political interests and demands are bound together, which dictates that they have to make China take the path of being divided, in which case China will be divided and split into many, many regions, leading to an even more tragic end than in history. It is an abyss. Most of the voices abroad now pursue such a reactionary line. There are, of course, revolutionary ones. We must better unite and support each other with our international comrades, otherwise we cannot eliminate the influence of the liberals abroad.
This solidarity movement, held by the liberals, is now beginning to turn more and more into a reactionary movement. It is only natural that their demand for the independence of the various nationalities and regions cannot be genuine, as opposed to the right of national self-determination that the socialist revolution was intended to give to the proletariat. The Hong Kong independents are fighting for a return to British rule, the Xinjiang and Tibetan independents are planning to return to the rule of their local religious groups, which are undoubtedly bourgeois. The overseas and domestic forces of the private bourgeoisie everywhere and the forces of international imperialism have joined forces to use the false rights of a bourgeois democratic republic as bait to use our students and try to deceive our masses in order to lead our country to a fractured end. This has to bring to mind the end of the disintegration of the Soviet Union, which indeed has similarities, but in fact is much more than that. Our people must realise the historical consequences of this line, which tells us that we can only follow the path of the socialist revolution, that we can only apply the revolutionary line of Marxism-Leninism-Maoism, and that we must gather with the fundamental interests of the proletariat.
But also because of the liberals' naive illusions and the fragmentation of the masses, this solidarity and protest movement is becoming less and less powerful. They have isolated themselves from the huge potential of the protest movement (i.e. our proletariat and petty bourgeoisie). Judging by the current situation, this line will certainly not yield good results at the moment, they cannot yet shake the rule of the bureaucratic bourgeoisie, which is currently united as never before in our country and which has learnt many ways of guarding against the liberals from the example of the end of the Soviet Union.
But it is necessary for this movement to fulfill its original mission rather than the mission of the liberals, that is, the opening of the epidemic policy, and the requirements of freedom of speech, freedom of the press, and freedom of information. This requires a shift in the future course of the movement. The movement needs to be controlled by the revolutionaries and led by the correct revolutionary method, or for the next new movement to continue to be promoted as a result of the fundamental contradiction between the proletariat and the bureaucratic capitalist class in our country.
(1) On Sunday November 27, thousands gathered on this road, named after Urumqi, the capital of Xinjiang Province, to protest Covid-19 restrictions that were believed to have contributed to a loss of life in an Urumqi building fire.
(2) The suggestion that China should disintegrate into a series of small countries. Some supporters see the provinces becoming their own countries. Its inspiration is the Spring and Autumn Period (roughly 770-476BC) when the royal authority of the Zhou Dynasty over the various feudal states eroded as more and more dukes and marquesses obtained de facto regional autonomy.
(3) Da Shu, or the so-called Republic of Basuria, its self-proclaimed “President” is Sichuanese-born Liu Zhongjing who moved to the US in 2016. He calls for the independence of Sichuan as the home of the Ba people.