AUSMIN 2022: Putting us further under the US thumb. 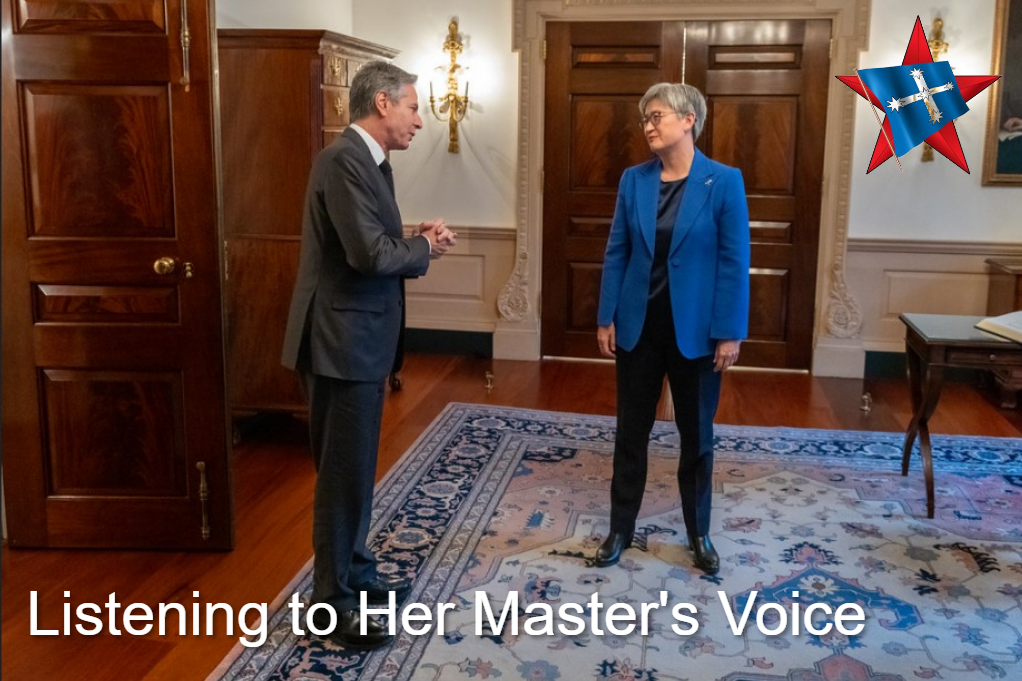 The annual meeting of US and Australian Ministers of Defence and Foreign Policy (AUSMIN) concluded with a Joint Statement on Australian-US Ministerial Consultations.

The document emphasises the continuing subordination of Australian sovereignty to US imperialism.

It also exposes Labor Ministers Penny Wong and Richard Marles as agents of influence of a foreign power, the US. It is not going too far to label them as traitors to the cause of an independent and peaceful Australia.

The document begins by saying that both sides want “a stable, rules-based international order where differences are resolved peacefully and without coercion, and where states cooperate transparently to address shared challenges.”

That so-called order is one that is created by US imperialism to serve its own interests. It is certainly not an order that has been developed through the United Nations. The US continually flouts decisions of the UN and acts illegally, in defiance of UN decisions whenever it wants to. It does so whenever a nation or a people tries to elevate its differences with US imperialism to active struggle against it, and then it uses maximum coercion to crush them. It does not respect the sovereignty and territorial integrity of other nations. It does not observe the purposes and principles of the UN Charter. It is a rogue nation and a global hegemon.

The document says the US and Australia want “to ensure an Indo-Pacific region that is free, open, stable, peaceful, prosperous, and respectful of sovereignty.” Indonesia, Malaysia and Vietnam might beg to differ. They have expressed concerns that Australia is adding to regional tensions, and ignoring or undermining ASEAN’s centrality to regional decision-making.

The document pledged to further expand US imperialism’s military presence in Australia. It said “Australia and the United States would continue the rotational presence of U.S. capabilities in Australia, across air, land, and maritime domains. This would include U.S. Bomber Task Force rotations, fighters, and future rotations of U.S. Navy and U.S. Army capabilities.” Further, they would “identify priority locations in Australia to support enhanced U.S. force posture with associated infrastructure, including runway improvements, parking aprons, fuel infrastructure, explosive ordnance storage infrastructure, and facilities to support the workforce.”

They decided to “preposition stores, munitions, and fuel in support of U.S. capabilities in Australia and to demonstrate logistics interoperability through joint exercises…(and) expand locations for U.S. Army and U.S. Marine Corps forces, to enable exercises, activities, and further opportunities for regional engagement.”

It is quite obvious that US imperialism thinks it can do whatever it likes here without the Australian people having any say in the matter.

It is quite obvious that Wong and Marles will happily allow US imperialism to do whatever it likes here without the Australian people having any say in the matter.

In reference to AUKUS, they said the they were “developing the optimal pathway for Australia to acquire a conventionally armed, nuclear-powered submarine capability at the earliest date possible.”

That is, we are still on track to pay the US $171 billion for it to have eight more nuclear-powered submarines fully embedded within its Navy, completely interoperable with other US submarines and to have them patrolling the seas around China, US imperialism’s global rival.

“If our objective is to be a deputy sheriff to the US, as the 51st state of the Union, then eight nuclear submarines is the answer.

“If our objective is ‘‘defence of Australia’’…then 20 AIP boats is the answer.”

AIP refers to air-independent propulsion, which enables a non-nuclear propelled submarine to operate without access to atmospheric oxygen (by surfacing or using a snorkel). They are quieter than nuclear-powered submarines and can be highly effective in coastal operations and pose a significant threat to less-stealthy and less-maneuverable nuclear submarines.

He says “We could buy 20 ultra-quiet, air-independent propulsion submarines for $30 billion and they would be perfectly suited to our interests. Instead we are talking about buying eight – not twenty, but just eight – boats for $171 billion.”

By my maths, that’s $141 billion that is being gifted to US imperialism by Marles and Wong, who, like Morrison and Dutton before them, are happy to roll over and have their tummies tickled by the owners of Their Master’s Voice.

We should not be reluctant to call out grovellers like Marles and Wong.

Liberal and Labor are national disgraces.

The Australian people will wake up to their treachery and reject being tied to the aggressive war chariot of US imperialism.

For an independent and socialist Australia!