Bound For South Australia In 1836 - Colonial Invasion With A Difference? 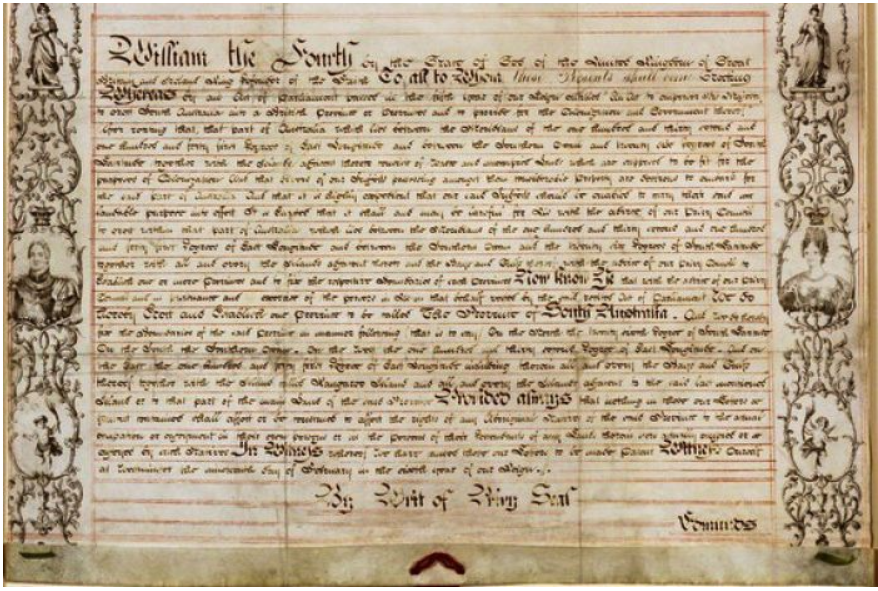 Wednesday 28 December 2022 was the 186th anniversary of the proclamation of the British colony of South Australia at Pattawilya (Glenelg) in 1836.

The then King William of England and the first Governor of the new colony, Governor Hindmarsh both made statements to the effect that the colony of South Australia was to be different from the other colonies of the British empire in that the Indigenous people were to be treated equally with colonial settlers in all respects.

In this matter, both were acting within the British Parliament's South Australia Act 1834 with respect to the founding and governance of South Australia as a British province. They were also constrained by the Letters Patent as a supplement to the Act.

The 1834 Act had stated that the colony of South Australia was “waste and “unoccupied”. The Letters Patent, under the influence of anti-slavery legislators in Britain, corrected that falsehood, and affirmed the colony’s creation “Provided Always that nothing in those our Letters Patent contained shall affect or be construed to affect the rights of any Aboriginal Natives of the said Province to the actual occupation or enjoyment in their own Persons or in the Persons of their Descendants of any Lands therein now actually occupied or enjoyed by such Natives.”

At the Proclamation assembly at Pattawilya an "Order in Council" was agreed upon
"requiring all to obey laws and declaring the Aborigines to have equal rights and an equal claim to the white man upon the protection of the Government".

Governor Hindmarsh and those at that Proclamation event may have had the best intentions but for the Indigenous people of Kaurna land and beyond in other parts of South Australia, these noble words about equality and equal rights never eventuated. For a start the equality talked about by the colonial settler leaders was equality under British colonial law which assumed that the Indigenous people on whose land the colonialists were standing and living on, had no laws of their own. The Letters Patent were simply ignored and dispossession by violence or threat of violence was enforced on the First Peoples in South Australia, just as it had been in others parts of Australia.

At the Proclamation Day commemoration of Wednesday 28 December 2022, the speeches of the Governor of SA, the Mayor of Holdfast Bay Council (Holdfast Bay includes Glenelg) and the SA Premier all emphasized that no matter the good intentions of Governor Hindmarsh and his cohort, Indigenous people in SA had suffered exploitation and oppression and dispossession in the same way that occurred in other colonies in Australia.

All three spoke in favour of the Voice, Treaty, Truth arising from the Uluru Statement From The Heart.

Kaurna Elder Micky O'Brien gave a powerful Welcome to Country and said that the past should not be forgotten, despite good intentions of King William and Governor Hindmarsh.  Indigenous people had always welcomed others to their land to walk with them, not to be overtaken by them. He said that the time had come to walk together with non-Indigenous people for a better world.

No doubt all the words at this 28 December 2022 Proclamation Day event were spoken with the utmost sincerity, as were the words 186 years earlier at the same place.

That words are meaningless without being put into practice was given a reminder by a banner which appeared at the 2022 Proclamation Day event.

The banner read, "Aborigines were wrongfully deprived of their just dues. We must, as far as we can, right the wrongs done."

These words on the banner were spoken by "Hon. D.A. Dunstan, Minister for Aboriginal Affairs, 15 July 1966".

A smaller banner next to this said "No to an Elite Voice. Yes to Aboriginal Self-Determination"

Whether the path being taken by the federal government in implementing a Referendum on First Nations Voice as a first step towards a Treaty and Truth thereby (in Dunstan's words) "right the wrongs done" remains to be seen.