Book Review: Dead in the Water 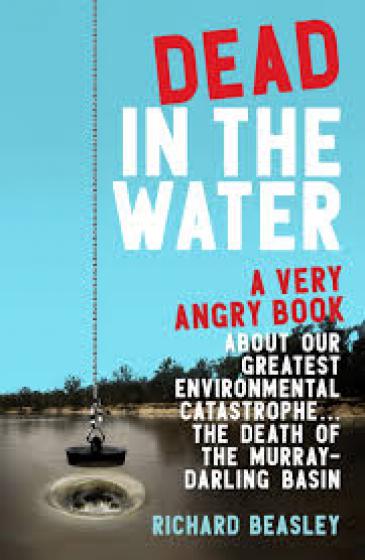 Richard Beasley’s new book’s cover describes it as a “very angry book” about the death of the Murray-Darling Basin.

In fact Beasley, who was Senior Council assisting the SA government’s 2018 Murray-Darling Basin Royal Commission, prefers to say that he was not angry, but livid, when writing the book. I suspect “livid” is defined by the mathematical formula “livid = (fury x anger)²” if his scathing denunciations of fraud, incompetence and unlawfulness are anything to go by.

The book is a compelling read and explains in great clarity why the Murray-Darling Basin Plan is unlawful and why this is responsible for our greatest environmental catastrophe.
The Murray-Darling Basin Authority (MDBA) is charged with implementing the law contained within the Water Act (2007) passed by the Australian parliament during the last term of the Howard Government.
The Water Act was Howard’s response to the Millenium Drought and sought to overcome the Constitutional prohibition on the national government having any responsibility for the nation’s waters. Beasley praises him for this, adding that “…this book is not an analysis of what he can be blamed for. I have a strict word limit.”
What Howard hoped to achieve, but didn’t, was the nationalisation of the waters of the Murray-Darling Basin so that the government’s obligations under a number of international treaties relating mainly to wetlands and migratory birds could be implemented.
Instead, state powers over water were referred to the Commonwealth in a “cooperative federalism” arrangement that still leaves states, through threats to withdraw, with real power over water.
The MDBA is the body through which the four states sharing the Basin make up the rules by which they circumvent their legal obligations under the Water Act. Those obligations are to establish the minimum required level of water in the system that would result in environmental sustainability, and to prioritise that over social and economic consumptive uses.
Scientists have determined that the Basin environment requires between 3900 and 7600 gigalitres (GLs) per annum. Through their unlawful inclusion of socio-economic factors alongside those of the environment, the MDBA has reduced this to 2750 GL, and has since brought this down through other frauds to 2100 GL.
The winners are what Tolarno Station grazier Rob McBride calls the 4Cs (cotton, China, corporates and corruption). They are connected in one way or another with the Northern irrigators and the foreign and local financial speculators who spin the wheels on the water trading tables. They are served, in turn, by the arrogant, anti-science and anti-people members of the National Party.
In a sign that things won’t get any better, Scummo has just appointed former cop and NSW Nationals leader Troy Grant, a former state MP for Dubbo and deputy premier of NSW, as Interim Inspector-General of Water Compliance of the MDBA. The Undertaker is in charge of the Old Rivers’ Home! Don’t forget that as Deputy Premier of NSW, Mr Grant threatened seven years’ jail for farmers and others disrupting any mining or gas related activity.
Beasley covers lots of contentious ground, such as why a focus on postcodes was used to settle on the unlawful 2750 GL environmentally sustainable level of take, why a million or more fish had to die in the Barka/Darling, and the economic imperatives behind the deliberate destruction of the Menindee Lakes.
He does not deal, except in passing, with the water market (“an entirely different kettle of fuck-up”).
He does, however, praise the validity of the original “Aboriginal Basin Plan” as enunciated before the Royal Commission by the late Ngarrindjerri elder Tom Trevorrow: “Don’t be greedy. Don’t take any more than you need to, and respect everything around you.”
With the Productivity Commission belatedly agreeing that First Peoples’ cultural needs for water be included in a revised National Water Initiative, Ngarrindjerri and other First Peoples’ wisdoms may yet help us save the Murray-Darling Basin.
…………………………
Richard Beasley, Dead in the Water: a very angry book about our greatest environmental catastrophe…the death of the Murray-Darling Basin, Allen & Unwin, 2021, rrp $29.99 or free to be borrowed at your local library.
To keep up with the fight against the 4Cs, check out these fb pages regularly:
Tolarno Station
Watershed Alliance
Speakup4water
Menindee Region Community Group on the Darling River
Broken Hill Menindee Lakes: WE WANT ACTION
Save the Murray Darling Rivers
River Lakes Coorong Action Group
Friends of the Coorong
(not an exhaustive list!)