Women's struggle is a class struggle

Written by: Alice M. on 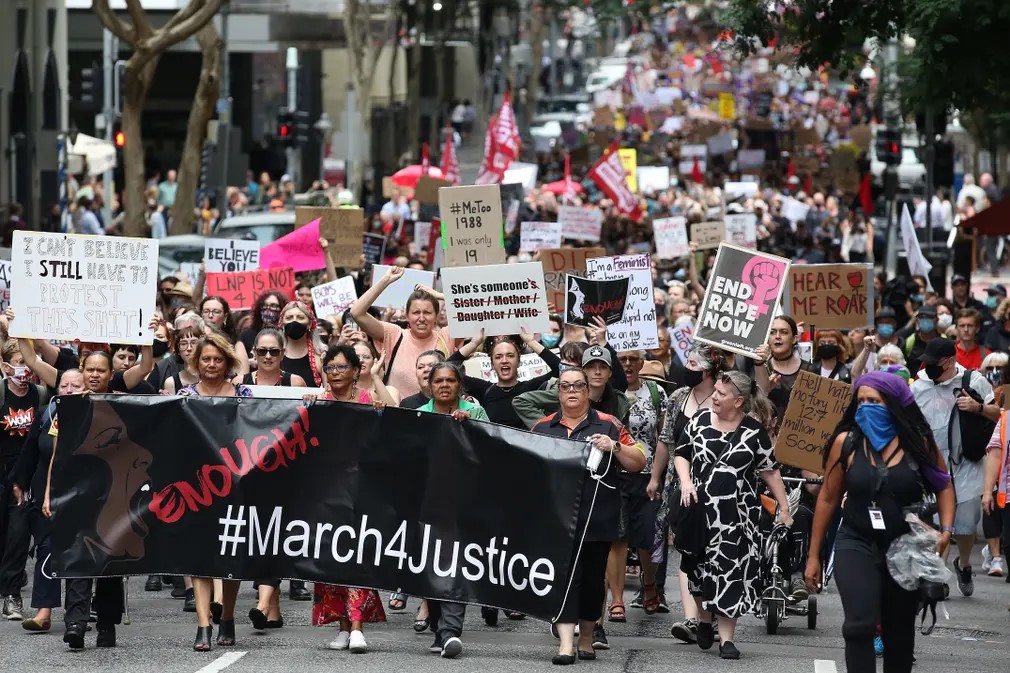 Women’s “March4Justice” swept across the country on March 15 as almost 100,000, mainly women, rallied against the relentless violence and discrimination against women.

For many women the national marches and rallies were about much more.  It was about the system that has betrayed women.  A system with its flowery worded Constitution and its so-called unbiased legal system, claiming to uphold human rights, women’s rights, democracy, equal opportunity, is exposed to be no more than bourgeois class trickery to keep all working people down.

This has always been a capitalist reality for the working class. A patriarchal capitalist state that keeps working women oppressed and silenced. The national rallies were about the 250 years of violent white colonial patriarchy inflicted on the First Nations' Women.  The rallies were in solidarity with the First Nations' Women who never ceased to resist the colonial oppression.

Organisers of “March4Justice” declared, “Women have been struggling for our rights for too long, enough is enough.” 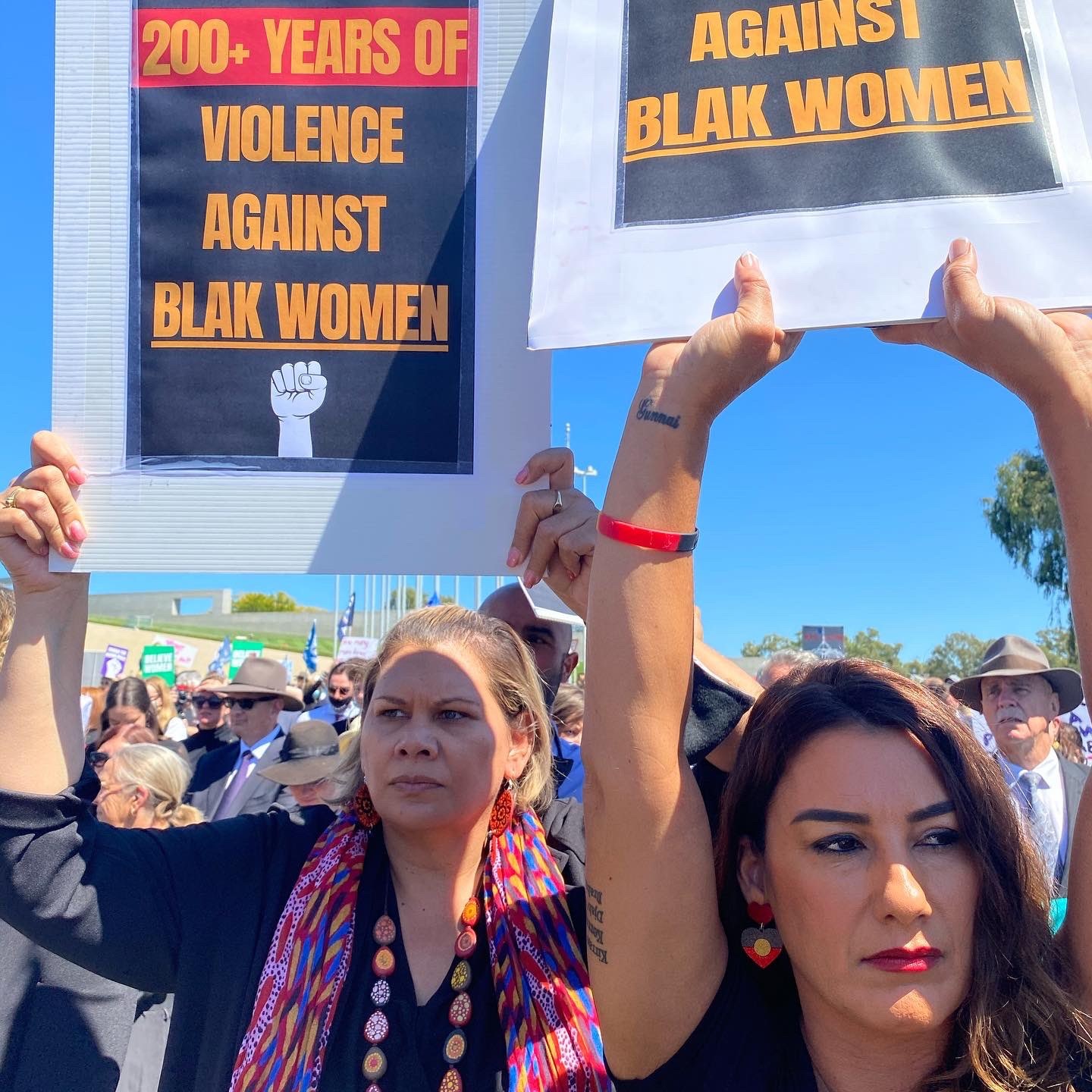 The national “March4Justice” rallies were a continuation of the centuries-long class struggle by women.  Across the country First Nations Women opened the rallies with passionate speeches calling for recognition and solidarity from the non-Indigenous women.  They condemned the colonial patriarchy brought to their country and communities in 1788.

At the Melbourne rally Sue-Ann Hunter, the proud Wurundjeri and Ngurai illum wurrung woman, told the 10,000 strong rally she wanted the non-Indigenous women to “acknowledge those staunch blak women who came before us, so we can stand on this land today and we can speak the truth.”  Melbourne speakers: https://www.facebook.com/VicUnions/videos/886974828811924

In Adelaide, Kaurna and Arabunna woman Janette Milera and other First Nations' women speakers told the rally “Our women have been fighting the colonial white men from the day of colonisation, our women have been raped, they have been taken and stolen and made as sex slaves since colonisation. We all need a change as women because this man’s law that we live under, it doesn’t work for any of us.”

Thousands demand end to injustice
Women survivors of violence powerfully recounted gender discrimination, sexual harassment and violence in all areas of society and in the corridors of power.  They vowed to refuse to be torn down and defeated.  In frustration they asked how long must we fight “this shit”; and that little has changed in past 50 years.

Speakers pointed out we fought hard for equal pay, child care, end to sexual harassment and discrimination at work, but little has changed.  Women receive 14% less in wages than men; we are over-represented in casual, insecure and part time work; we are concentrated in industries with the lowest pay and highest unemployment, more women are on meagre Jobseeker allowances, Cashless Debit Card. Child care is unaffordable, and we still carry the heaviest burden of domestic work, nurturing and caring for children, the sick, the elderly and family members with disabilities. We are sexually harassed, intimidated and discriminated against in many workplaces.  “We are entitled to respect and equality” they demanded.

The trigger for spontaneous eruption of the “March4Justice” movement was the public revelations of discrimination, degrading, harassment and violence against women working in Parliament, the entrenched patriarchy in the highest institution of bourgeois parliamentary “democracy”. It resonated with the experiences of millions of women in their workplaces and areas of society.

Courageous Grace Tame also lit the fuse of pent-up outrage when she broke the silence of continuing abuse and violence against women in society.  The years of mounting injustices against women and their anger culminated in the “March4Justice”.  A crack appeared in the seemingly insurmountable edifice of institutionalised capitalist patriarchy which women pushed through and vented their anger, refusing to stay silent.

Enough of being polite; time to show some fight

"Enough is enough" resounded across the country.  Enough of the oppression of First Nations Women.  Enough of violence and discrimination against women. Enough of sexism, not being listened to, ignored and enough of exploitation and abuse.  Enough of decades of quietly waiting for change. And enough of being polite and submissive.  Enough of watching the even few small social gains women made in struggle 50 years ago now dismantled and disappearing.  “I can’t believe we still have to protest this crap”, many signs proclaimed.

Fourteen months ago Sex Discrimination Commissioner, Kate Jenkins, launched the Human Rights Commission’s Respect @Work Report.  It’s still sitting in one of the Minister’s bottom drawers, and women are patiently waiting for the government to respond.  Like many other volumes of reports and legislative recommendations on sex discrimination, harassment and abuse in workplaces.

“March4Justice” rallies were held across the country in 44 cities, regional centres and remote townships.  In every main city, Melbourne, Adelaide, Sydney, Perth, Brisbane and Hobart close to 10,000 mainly women and their supporters marched through the streets.  For many this was their first rally.  From Darwin to Adelaide, Perth to Sydney, Melbourne to Alice Springs, from Bega in NSW to Albany in WA, from Warrnambool in Victoria to Bundaberg in Qld., close to 100,000 angry women and their supporters rallied nationally as one in solidarity with each other demanding an end to violence, discrimination and exploitation of women.  One placard summed it up. “We’ve had enough of this shit. We are marching for justice”.

Women from all walks of life and ages came together.  Many unions and state and regional Trades and Labour Councils joined rallies and marches across the country, led by women unionists from ASU, MUA, AEU, ETU, CPSU, CWU, HACSU, AMWU, HSU, NTEU, UWU and others.

In Canberra, 7000 women and their supporters rallied outside Parliament House calling on the Prime Minister to come out to listen to their voices and be handed a petition signed by 80,000 women.  The Prime Minister refused and instead offered to meet with a small delegation.  The women declined the offer, “More than 100,000 women and allies from every walk of life are standing up to speak,” they publicly announced, “How could meeting with just three women be enough?  Women of Australia do not need more meetings or reports by expert bodies on what needs to be done to end gendered violence.  The overwhelming majority of views (women) said no.  We have already come to the door, it’s up to the Government to cross the threshold and come to us.”

Fearing the 100,000 strong, rising women across the country and the 7,000 standing directly outside the doors of parliament, the Minister for Women Marise Payne, and Prime Minister Morrison barricaded themselves and sought refuge inside the walls of Parliament.

And what was the government’s response to women’s collective roar demanding they be listened to?   More silencing women’s voices.  Attorney-General Porter took out far-reaching defamation action that would mute women, the ABC, journalists and anyone else who dared to speak the truth.  Prime Minister Morrison ignored and tried to silence 100,000 women with veiled threats, “Not far from here, such marches – even now – are being met with bullets, but not here in this country”, he said.  Women replied “Special thanks to Scott Morrison for not shooting us all,” they said.  Women’s voices may not have been met with bullets here, but there is no doubt they are seen as a threat and “have been met with full force of the bourgeois law”.

The exposure of parliament penetrated even into Liberal Party’s loyal supporters.  The curtain over Brittany Higgins eyes was lifted.  She said “It was so confusing because these people (the Liberal Party) were my idols.  I had dedicated my life to them.  They were my social network, colleagues and family.”
For women still clinging to the illusion of equality in a capitalist society, recognition of the rights for women is more fractured.

There are dangers that this spontaneous movement of large sections of Australian women will fizzle out, unless it connects to independent working class women’s struggles for the rights of all working people.  There are dangers it will drown and disappear into the cesspit of parliamentarism.
We can learn many lessons from the 2007 Your Rights at Work are Worth Fighting For mass grassroots campaign on whose backs Labor rode into government.  Straight after the parliamentary victory the ALP government and top union officialdom beholden to the ALP dismantled the Your Rights at Work Worth Fighting For mass movement, abandoning working people again.

In the final analysis capitalism cannot even begin delivering the justice and the rights women are demanding.   The system has to be dismantled and replaced to empower women to build a socialist society where justice and real equality will triumph.