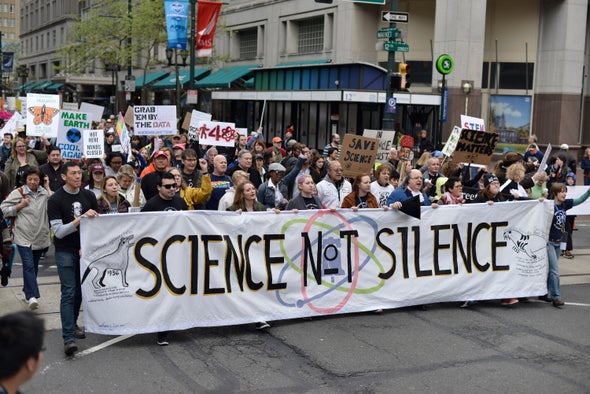 In 2017, as a direct response to Donald Trump’s incessant attacks on science, US citizens called for a March for Science.  The march was held on Earth Day to emphasise the link to climate change denialism. Around the world, more than a million people marched.

People organised to march in Australia too, the inaugural march occurring on 22 April. People were angered that then Treasurer Scott “Scummo” Morrison had used his parliamentary platform to rub a lump of coal in their faces, taunting them with “This is coal. Don’t be afraid, it won’t hurt you.”

The Prime Minister at the time, Tony Abbott, was an unrepentant representative of big corporate interests that reject science if it does not serve capital accumulation. His was reputedly the first Australian Federal Government in 81 years not to have a Minister for Science.
Thousands marched in the big cities and regional centres. Marches were held in 2018 and 2019, but not during the pandemic year.
Attacks on science and scientists are really part of a larger pattern of neoliberal revenge against advocates of evidence-based policy making.
It is one thing for a denizen of Cowards’ Castle to defund scientists and advocate opposition to science-based evidence, but much of that evidence gets suppressed long before politicians get the opportunity to belittle it.
A study published in September 2020 found that “the suppression of science through constraints on commentary and communication was commonly reported within government, industry, and, less often, at universities. The science suppression reported included complete prohibition on communication, as well as alteration of communications to paint government or industry actions or decisions in a misleading, more environmentally friendly, light.”
The MDBA censors the CSIRO
Richard Beasley, Senior Council Assisting at South Australia’s Royal Commission into the Murray-Darling Basin, refers in his book Dead in the Water to the study undertaken for the Murray-Darling Basin Authority (MDBA) by the government’s  Commonwealth Scientific and Industrial Research Organisation (CSIRO) on its dramatically (and unlawfully, according to Beasley) reduced estimate that the environment needed only 2750 gigalitres of water flow on average per annum. Scientists had previously concluded it needed much more, in the range of 7-8000 gigalitres.
In his chapter titled “The best available heavily censored science”, he quotes from the testimony of CSIRO scientist Dr Matthew Colloff who led a team of 30 from the CSIRO which came to the conclusion that the benefits from the MBDA’s lower figure would at best be “marginal”.  To make their research easy to interpret, they used a standard spreadsheet with colour coded symbols showing the impact on ecological targets: green for “would be met”, amber for “probably wouldn’t be met”, and red for “would not be met” The MDBA insisted that the “traffic lights” be excluded because they reflected so badly on their 2750 gigalitre figure. The CSIRO went along with this censorship of its own report.
Further interference by the MDBA occurred when it unilaterally changed a reference to the “increasing vulnerability” of trees in the higher elevations of floodplains to them seeing “little improvement”. The latter implies some improvement which the former denies. Beasley quotes from the Royal Commission transcript other “editorial” alterations to Colloff’s report. When Colloff reported to a CSIRO Executive that his results were being “manipulated and interfered with”, she told him words to the effect that “Well, we don’t have a choice because if we don’t do it, we won’t get paid.” The threat was that the MBDA would withhold payment to the CSIRO unless it agreed to scientific censorship.
Censoring the CSIRO
The power of the fossil fuel corporations and the stridency of climate change denialism has resulted in other censorship of CSIRO studies. In 2009, the Rudd Labor government was trying to get a market-based carbon emissions trading scheme through parliament. A paper critical of the scheme was suppressed by the CSIRO, whose CEO, Megan Clark, had worked for Western Mining Corporation and BHP-Billiton. Clark attacked the report's author and threatened him with unspecified punishment. (After working at the CSIRO for five years she went back to fossil fuels as a non-executive director at Rio Tinto Ltd.)
In August 2015 the CSIRO discontinued its annual July and August survey, conducted over the previous five years, of how Australians viewed global warming and their support for action. In the previous 2013 poll, 86 per cent agreed with the statement that climate change was occurring and only 7.6 per cent disagreed. This clamp-down occurred under new CEO Dr Larry Marshall  – a former venture capitalist with Southern Cross Venture Partners. In February 2016, Marshall caused an international outcry after describing Australia's national climate change discussion as "more like religion than science," a week after announcing hundreds of job cuts to the organisation that would reduce the effectiveness of its climate research team.

Censoring biodiversity threats
Australia has the worst record in the world for species extinction. Prevention of species extinction is meant to be one of the drivers behind the Environmental Protection and Biodiversity Conservation Act, yet the government is in the process of significantly weakening it.
According to the 2020 study, biodiversity is a hot spot for science censorship:
Topics that were suppressed are some of the most demanding and complex environmental issues. Australia has the worst record of mammal extinctions globally (Woinarski, Burbidge, & Harrison, 2015) with feral animals, changed fire regimes, and land clearing the key threats (Kearney et al., 2019; Woinarski et al., 2015). Australia is regarded as one of the world's 11 deforestation fronts (WWF, 2015) and is likely to suffer widespread biodiversity loss from climate change and habitat loss over coming decades (Hughes et al., 2017; Segan, Murray, & Watson, 2016). Yet our respondents reported that information about these critical topics has been distorted and suppressed.
They are distorted and suppressed because the big miners, the corporate irrigators and agricultural companies don’t want restrictions on their exploitation of the environment.

In Part 1 of this article, we referred to the threat to the critically endangered regent honeyeater posed by plans to raise the height of the Warragamba Dam. This beautiful bird, which numbers in the low hundreds, is also threatened by land clearance for the Tahmoor Coal Mine expansion and the proposal, with Chinese backing, to develop two massive new coal-fired power stations near Kurri Kurri in the New South Wales Hunter region. These proposals may already have been sidelined as plans for a gas-fired power station, yet another polluting fossil fuel, emerge. In any case, we need the uncensored evidence from scientists on any threats likely to be directed at the regent honeyeater.
Silent blight
In the September 2020 study referred to earlier in this article, study participants described the pressures to be silent. Some of their comments include:
“I declared the (action) unsafe. I was overruled and … was told to be silent or never have a job again.”
“an email was circulated to our whole department (environmental) warning us not to attend protests or comment publicly on the development.”
“We are often forbidden (from) talking about the true impacts of, say, a threatening process […] especially if the government is doing little to mitigate the threat.”
“I was directly intimidated by phone and Twitter by (a senior public servant).”
“… governments allow (industry) to treat data collected as commercial in confidence. This means experts most able to comment on the details of big mining and construction projects are hopelessly conflicted and legally gagged from discussing these projects in public.”
“(Government) staff are rewarded or penalized on the basis of complying with opinions of senior staff regardless of evidence.”
“I proposed an article in The Conversation about the impacts of mining […] The uni I worked at didn’t like the idea as they received funding from (the mining company).”
“a project … clearly had unacceptable impacts on a critically endangered species…. the approvals process ignore(d) these impacts … Not being able to speak out meant that no one in the process was willing or able to advocate for conservation or make the public aware of the problem.”
“we are often forbidden (from) talking about the true impacts of, say, a threatening process … especially if the government is doing little to mitigate the threat … In this way the public often remains ‘in the dark’ about the true state and trends of many species.”
The first of those statements clearly indicate that scientists self-censor information for fear of damaging their careers. It is a fear similar to that which prevented Brittany Higgins from initially proceeding with a police complaint against her alleged rapist. Like Brittany, they work inside toxic cultures and coercive hierarchical structures where vested interests conspire to prevent important scientific information, particularly about environmental threats, from reaching the public or decision-makers.
We make this pledge now to the scientists of Australia, that an independent and socialist republic will make their research work inviolable, that their independence will be respected at all times.
Stop silencing the scientists of Australia!