The Royal Commission's Report into Aged Care Quality and Safety was released over 11 months ago. Since then we have seen continuing neglect and deliberate avoidance of addressing key recommendations within the report that were aimed at improving the conditions of both the aged and their carers. This simply reconfirms the fundamental principles that condition a response to aged care within capitalism.

The primary issue is that the aged are seen as non-productive and hence have very little relevance to the ongoing production of wealth and private wealth accumulation within capitalism. They are treated as a burden and this is reflected in the policies and lack of support for both the aged and their carers. Relevant points relating to developments since the Royal Commission report include:

1. The absence of focus and discussion on the aged.
2. The neglect of the aged and their carers during COVID – some of the worst examples of neglect in relation to quarantine and immunisation.
3. A complete failure to address the totally unacceptable remuneration for aged care workers. This failure includes the completely inadequate once-off "bonus" announced by Colbeck and Morrison on February 1 of an amount ranging from $300 (for persons working less than 15 hours per week in home care, up to $800 for persons working more than 31 hours in residential care.)
4. The staggering contrast of the impact of COVID on the aged between government and private providers. This arises directly from a number of issues including: a focus on user pays, the emphasis on private enterprise and profit ahead of meaningful attention to better outcomes for the aged and their carers, the associated attempt to reduce costs through the lowering of standards and requirements in relation to aged care.
Since the report was released, there has been a significant lack of effort to ensure the public are aware of developments in this area. There is the occasional article in the popular press that will highlight a specific failure on the part of the health care "system" but no clear focus on continuing to address the Commission's recommendations. When articles do appear, they reveal appalling neglect. The COVID pandemic is an example of this.
In an article by Anne Connolly in the Age in early January titled "As Omicron moves in, Australia is facing a predictable tragedy in aged care", she points out that "just one third of elderly residents have received a COVID booster from the government" and "if the federal government had vaccinated them in April last year under its 'priority' listing as promised, every one of them would have been able to receive it by now".
Anne Connolly also points out that at the time of her writing the article, almost 1,000 aged care residents had died from COVID, and that there were more than 1,600 people in aged care infected with COVID, with 80 lives lost within the previous two months. With under-vaccination and rapid spread of the virus with the "opening up" of society, the situation is now much worse.
She states: The Aged Care Royal Commission set out comprehensive recommendations to avert such a disaster by increasing staff numbers and paying proper wages, ensuring up-to-date vaccinations and giving families regular access to their loved ones.
This abysmal neglect also highlights the government's focus on private providers and an unwillingness to hold them to account. As the Minister for Aged Care Services, Richard Colbeck admitted, "Some of the private contractors who received millions for administering the initial vaccinations and the boosters … may have taken time off over Christmas". This reliance on private providers and a failure to hold them to account is further highlighted by the fact that the above statistic on booster vaccinations may not be accurate as the government has not been collecting data. 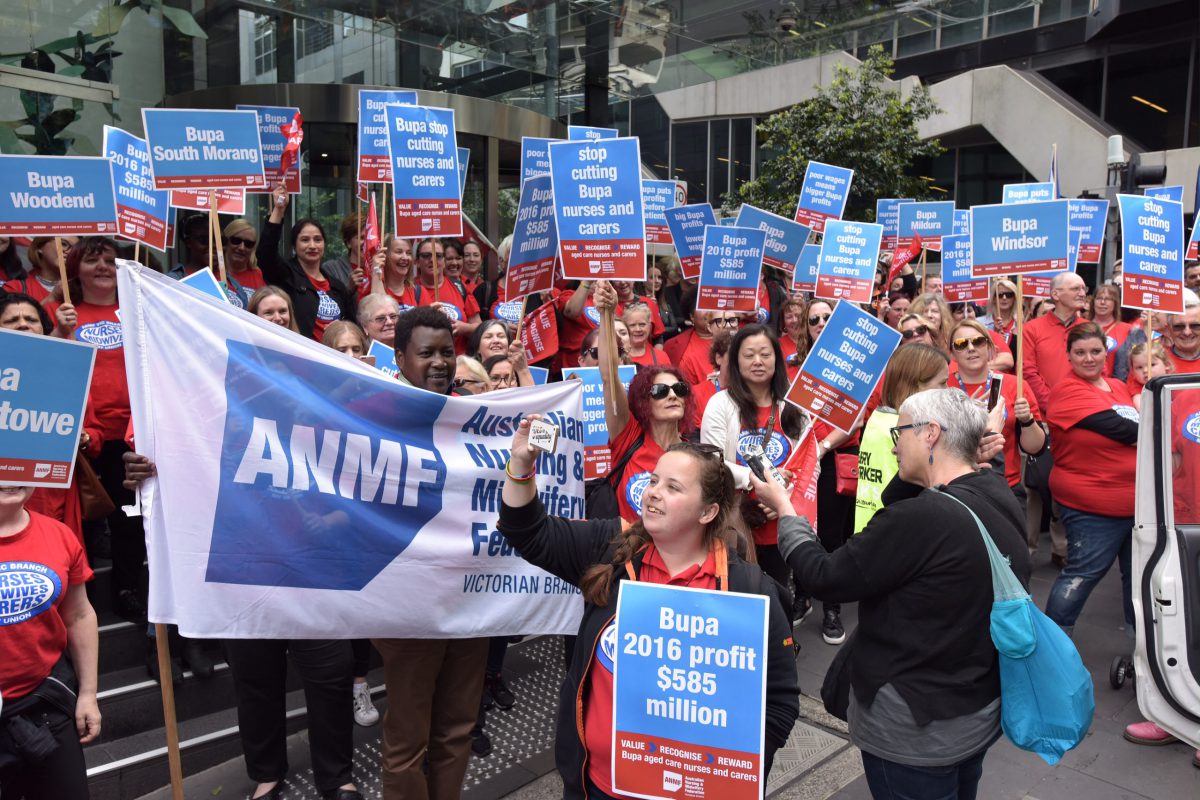 The comparison between private providers and State run providers clearly demonstrates the failure of capitalism to address the needs of the more vulnerable in society. In an article in the Age on the 15th February titled "Why Victorian public aged care homes were spared the worst of coronavirus", Clay Lucas states "Coronavirus has ripped through private aged care in Australia over the past two years, but one form of aged care has been only lightly touched by the pandemic – publicly run homes in Victoria". He also points out that the 179 state-run homes in Victoria have more nursing staff, higher wages and are often located near other health facilities. The State-run providers have significantly lower rates of infection and deaths.
Some important comparative statistics provided by Clay Lucas include:
• In 2020, three public sector residences contracted COVID with no deaths, while private and not-for-profit homes recorded 2000 infections and 655 deaths.
• In 2021, three residents of Victoria's public aged care homes died.
• Up to mid-February this year (2022) with the rapid rise in infections, Omicron has killed an average of 17 aged care home residents each day, with just three people in total in Victoria’s state-run homes having died.
• 0.1 per cent of public facility residents have died since the pandemic started compared with approximately 2 per cent in private homes.
• There are no ratios for nursing staff to residents, or minimum standards in private and not-for-profit aged care.
• Public sector homes are generally attached to a larger health service of some form, and most are staffed almost entirely with qualified nurses. A typical private or not-for-profit aged care home is 70 to 80 per cent staffed with personal care assistants, who have far less health training than nurses. There are also grossly insufficient Personal Care workers.
This information in no way suggests that we can resolve the problems of Aged Care and Safety by moving towards public provision within capitalism. This will not happen in any substantial manner. The focus within capitalism is to safeguard the rich and their ability to continue to accumulate wealth. This is the essence of the capitalist system and is exemplified in the ongoing emphasis on user-pays in the provision of an increasing range of public services including the principle needs of health and education.
The neglect of aged care and aged care providers occurs while public money is readily spent on reinforcing the alliance of the wealthy with their peers. The recent decision to spend billions to purchase nuclear powered submarines is a glaring example of this.