(Above: Gomeroi man Raymond Weatherall outside the Federal Court on April 8.)

In Gomeroi language, ‘Gamil’ means ‘No’.

Across the country, in almost daily protests, people are saying no to increasingly rapacious capitalist attacks. Sydney is no exception.

In less than a week in early April, a national link-up by Stop the Intervention Collective Sydney brought voices and faces from across the Northern Territory into our homes; supporters of Gomeroi gathered against fracking in the Pilliga; striking health service workers demanded safer conditions and pay; and at Palm Sunday people marched for hope and for peace and against the incarceration of refugees that wars create.

The following day Sydney bus drivers rallied outside NSW Parliament against unsafe conditions. A woman driver said shifts on the recently privatised networks were now regularly five and a half hours without a toilet break. Repulsive NSW Transport Minister, David Elliott, said it had nothing to do with his government. Not a breath about its promise not to privatise buses, nor pledges that workers’ pay and conditions would not change nor any services be cut when they WERE privatised.

Young people are stepping up

First Peoples make up just three percent of our population, yet they carry the heaviest load of oppression. This writer will concentrate on just their two events that week.

On Wednesday, April 6, Lardil man Steve Kumanjayi Bunbadgee Hodder Watt who writes for IndigenousX told online viewers that the NT Intervention (or Northern Territory Emergency Response, the NTER) was “a licence for racism”.

First Peoples were “watching apologies happen… while they were still doing the same thing”, he said. “It doesn’t matter if it’s Liberal or Labor.”

Steve Hodder Watt referred to a recent anti- fracking article. He wrote “The closed hearing session was the first time ever that only Aboriginal parliamentarians have sat to hear out impassioned and inspiring community-driven leadership.”

Steve Hodder Watt spoke from Mparntwe Alice Springs alongside Arrente Custodian Elaine Kngwarraye Peckham who said, “We’d like to see something that our children and grandchildren can be happy for.”

Living, breathing, walking and fighting the Intervention’s “never ending” despair for 15 years, Aunty Elaine and others from the Strong Grandmothers Group from the Central Desert Region give hope and cultural support to young people each night, through patrols on Mparntwe streets.

Gudanji Wakaya woman Rikki Dank thanked Aunty Elaine, “We want you to know the younger people are stepping up… Our Old People have done enough. They need to be able to rest.”

She spoke of the importance of learning in Language, an antidote to the Intervention’s “dark shadow”.

“We are tired of listening to governments”

Dr Greg Marks spoke of a memorandum of understanding (MOU), which he said was “just as important as the Northern Territory Intervention”.

Without warning, three months after the NTER began, the Federal Government secretly dumped its responsibility for housing on remote communities.

It banned any Commonwealth support for hundreds of Aboriginal communities and town camps, covering over 5000 residents.

Dr Marks said over 40,000 people are directly affected by the MOU, as less housing on homelands puts pressure other communities in regional towns and cities. Young First Peoples flood into these centres where disfunction and destruction are rife.  They are cut off from lore, language and culture, and from the far better health and education outcomes that strong well-funded homelands provide.

Warlpiri man Bruno Jupurrurla Wilson from Yuendumu described “third world” conditions. He said that before the Intervention, “our school was bilingual for 50 years.”

He spoke of police on community “dressed up like they was going to Afghanistan. Before that we used to have a permit system,” he said.  First Peoples decided who could enter Country.

“We are tired of listening to governments,” he said.

Just as the NT is covered with potential fracking sites, so too is the Pilliga 250 kilometres north west of Tamworth in NSW.

Each of the 850 planned wells would cost each NSW resident $5 in government subsidies, Raymond Weatherall said.

“We have an obligation not only to ourselves but to those who surround us,” he said.

“There will come a time when each and every one of you will be invited to come to Gomeroi Country,” he said. “For the future, keep your ears to the ground. Don’t walk behind me. Walk beside me.”

Speakers from the Maritime Union of Australia and the Electrical Trades Union supported the protest. The ETU spokesperson said Santos would be hard pressed to find electricians to work on the wells. 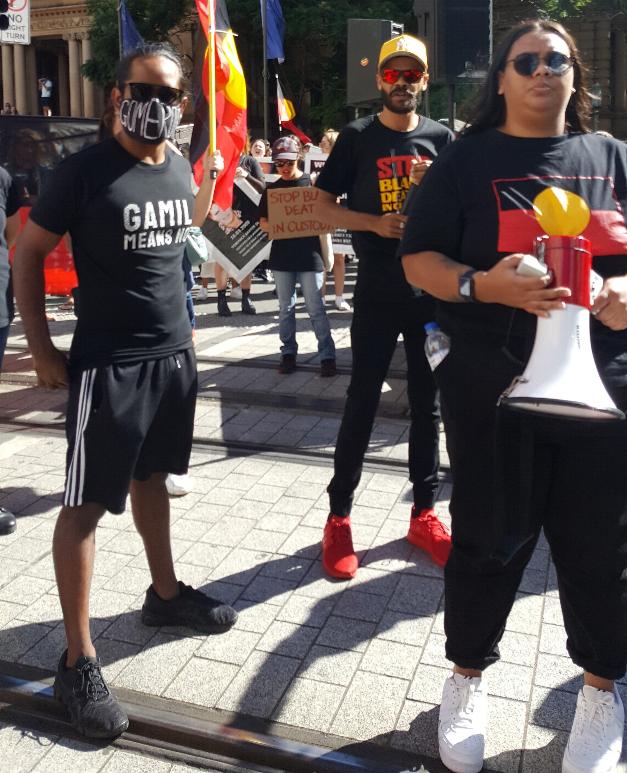 A message from Gamilaraay Next Generation spokesperson, Ian Brown, currently in the Pilliga, decried Santos attempts to extinguish native title.

Like all speakers, he stood against the threat to the Great Artesian Basin posed by fracking.

He said, “We cannot proceed down this destructive path.”

‘NO’ is a strong place to start. No to our common enemy, monopoly capitalism, that bullying US imperialism “our” top politicians and parliaments here bow down to.

Yes, to the lessons we learn in struggle, that support this bigger fight. Yes, to building our own united, organised strengths to combat pessimism and passivity.

The masses, not small groups, make history. At present, the forces of capitalism are far stronger and more organised. Drawing common threads together, our task is to target our main enemy, build organisation that goes beyond spontaneous outbreaks for reform.

Capitalism won’t fall unless people learn from their own experience that there is a way forward, that they can win.

Sparks can create a bushfire. There are frequent small fires.

It’s time to organise more deeply among the people, study our enemy’s weakness and build on our own strengths. It’s time to fan flames.

Gamil to destruction. Yes, to a future when corporations don’t rule our world.